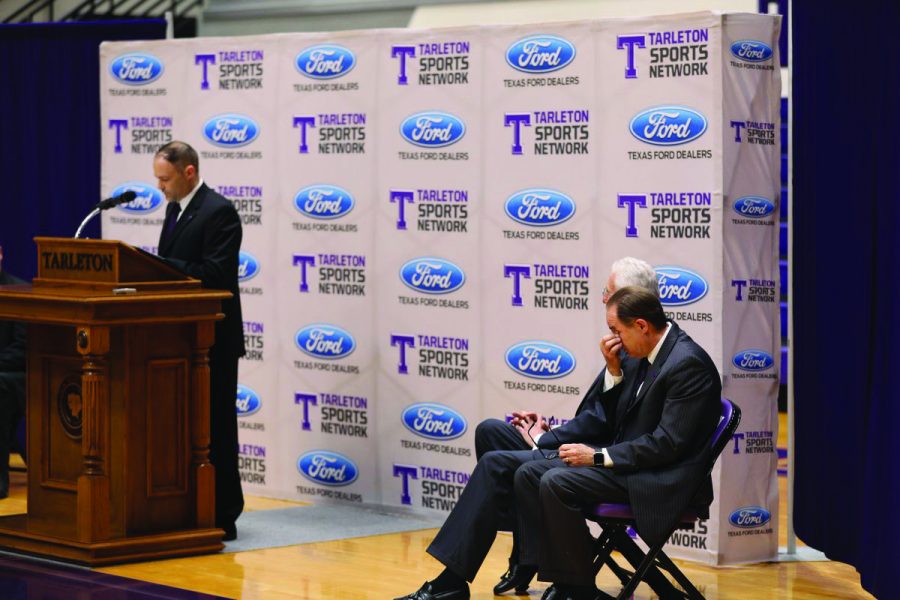 Tarleton State University’s men’s basketball head coach, Lonn Reisman, made the announcement at a press conference on March 23 that he will be stepping down as head coach.

“Make no mistake about this,” Dr. F. Dominic Dottavio, President of Tarleton, said. “Lonn is not retiring.”

Lonn, who has been the men’s head basketball coach for 30 years, will now be the full-time athletic director now and his son Chris Reisman will step up as head coach.

Lonn said of his stepping down, “this is a celebration, not a time to be sad.”

Lonn made his decision almost eight years ago, but the switch kept getting put off due to planning. He has been the athletic director for 20 years and has been filling both positions since then.

“Lonn is stepping down as coach at the top of his profession,” Dottavio said. “He leaves a legacy of excellence and certainly great achievement. I can’t wait to see what he will accomplish as the full time athletic director.”

Lonn has received many notable rewards since his time at Tarleton. According to Dottavio, he has more National Collegiate Athletic Association wins than any other coach in Texas, he has been named Coach of the Year 13 times, he’s won the National Powerhouse Rank of number one four times, he was the first one in Lone Star Conference history to make the lead eight four times and he recently received the 2018 Guardians of the Game Leadership award from the National Association of Basketball Coaches.

The past president of the coaching association said, “Lonn has built one of the most preeminent programs in America that has stood the test of time.”

Dottavio said that he couldn’t agree with the statement more and he is proud of Lonn for his numerous accomplishments for Tarleton.

Chris Reisman, who was named the new head coach for Tarleton’s men’s basketball, has been on staff for 17 years and the associate head coach for 12 years. He was raised in Stephenville for most of his life and attended Tarleton as a student. He played basketball for his dad, Lonn and received two degrees from Tarleton.

“This is one of the most blessed and exciting days of my life, but on the other, it’s one of the saddest and most bittersweet moments of my life,” Chris said. “I’ve had something special here at Tarleton and I’ve always loved it; back in ‘97 as a player and now 21 years later as a coach. I’ve had a chance to be alongside my hero, my best friend and my father.”

Chris said that nobody understands the expectations of the program better than he does and vows that the standard of the program is not going to change. Chris says he takes pride in selling and representing the university and he always will continue to strive to make everyone proud.

Chris finished his speech by saying, “There’s never going to be another Coach Lonn Reisman at any level. But, here at Tarleton, there will still be a Coach Reisman.”