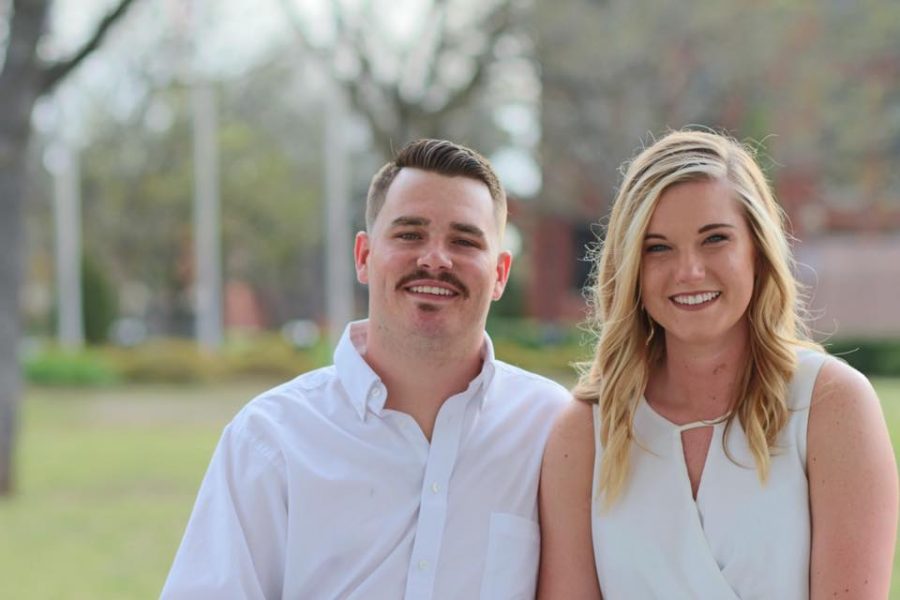 On April 18, 2018, the Grassburr Fest halted their activities to announce the winners of the Mr. and Mrs. TSU contest.

“It’s a big accomplishment for me,” Hill said. “Having gone to school here for four years and committing myself to this university and having the opportunity to be recognized for it was cool, but it’s really cool to finally be able to wear the letters of the university that I love.”

After graduation, Hill plans to return to his roots in West Texas and begin investment in territory with oil gas and natural gas.

“Right now, I’m looking into getting into a field position in order to learn about the industry as much as possible, go out there and make great connections,” Hill explain. “Long term, I’d like to work for an informational company and work with social media to get that information out there as well as come back to college to work on my personal brand, which is like Success Consulting for College Kids. You hire an academic tutor when you’re struggling with class, but what if you’re struggling to find a life balance. That’s where I had started my company.

“For me, I think it’s the Tarleton family and the network of opportunities. I’ve worked with three Tarleton Alumni since I came here in 2014. Through them, I have met fantastic people that have been great connections for me, they’ve helped me find potential employment post-graduation, they’ve helped me create great mentors and friends.”

Over the years, Hill has served Tarleton as a member of the Alpha Gamma Rho fraternity, the Tarleton Activities Board, a member of the Bonfire Executive Team, formerly the president of the Agricultural Communicators of Tomorrow and the Tarleton Transition Mentor for three years. By serving in these organizations, Hill has able to meet new people that eventually became his friends.

“[The organizations] has also helped me learn how to balance my social life, plus my academic,” Hill said. “I feel that’s important. Being involved a lot has taught me responsibility, being part of a team and doing those stuff like that I feel was good for me and getting involved has helped me find my place on this campus.

“I think we need to get back to seeing the little things. Not just in the tradition of Homecoming, but to do something small as wearing purple on Thursdays, being a person of integrity and finding it in holding the door for somebody or picking up trash while walking across campus. Being civil isn’t just about settling an argument with somebody but could be about giving someone a smile. Being a leader isn’t about being at the top of the pack but knowing how to follow. When it comes to excellence, it’s not always about beating somebody else but it’s being better than you were yesterday. And when it comes to service, its more than just a good feeling it’s about giving back what been given to you.

“I do want to leave a legacy behind as a servant leader. I don’t know how many volunteer hours I’ve done, but I’ve always enjoy giving back to Tarleton. Just really giving back for what it has given me. I’ve got my best friends coming out of here, I have my girlfriend coming out of here. If I could leave anything here, it would be a legacy of serving leadership and helping students lead and serve in the same capacity, making the best better.”

To be recognized as Mrs. TSU requires a lot of distinction, that which Senior Marketing major, Ashley Armstrong, was recognized for holding.

“It’s a fantastic opportunity to be able to represent TSU and the positive life that the title is and its very humbling to hold this title,” Armstrong states. “I’ve know people from previous years be looked up to for holding the title. So I’m hoping that when I leave people will be able to look up to me having this title knowing that I did my best for the university.”

With plans to move out to Odessa, TX, Armstrong plans to, “be able to get a position in a marketing firm to kind of help businesses grown in the Odessa and Midland area”.

“[Tarleton] has prepared me for the best. With all the professors I’ve had, they have prepared me and helped me understand what I am getting into with the field of marketing and with my organizations, I have been able to do a lot of marketing for them through their social media accounts for them,” Armstrong said. “Between that, its helped me grow into the person I want to be within the workplace as well as the person that I want to be outside the workplace. “

Throughout her time at Tarleton, Armstrong has been involved in the Delta Zeta sorority, the Student Government Association, the 2017 Bonfire Executive Team, a member of the Panhellenic executive board and a Tarleton Transition Mentor.

“Every single position and organization that I’ve been a part of has somehow impacted me for the better,” Armstrong explained. “All the way though having a leadership role in Delta Zeta to even leading a group in Duck Camp and even T-Week it has prepared me even more than anything else I could have experience going through college and also going through it has been a humbling experience, going through what I have done in the couple of years that I’ve been there.”

If there is one thing Armstrong would like to leave behind, “it’s that people are able to do the best that they can no matter what the situation they are in. I hope that people who’ve looked up to me will be able to do the same. And also being someone for them to go to for advice and be an open ear for them and be able to lead them in that direction of joining an organization, or just being a leader on campus is what I think I will be leaving behind.

“Continuing to live out the Tarleton Core Values in your everyday life has shaped both Matt [Hill] and I and I think when people implement those into their everyday lives it really does change a person for the better and I think that we follow those Core values for a reason and I hope everyone continues to use them and understand that we have these in place for a reason why they are still important to every Tarleton Texan that walks on campus. I just hope that people will implement these [Core Values] and after then leave here they’ll still have it in the back of their minds and even just showing Integrity an Civility doing good Service and being a Leader and following Traditions whether it be at Tarleton or elsewhere.”