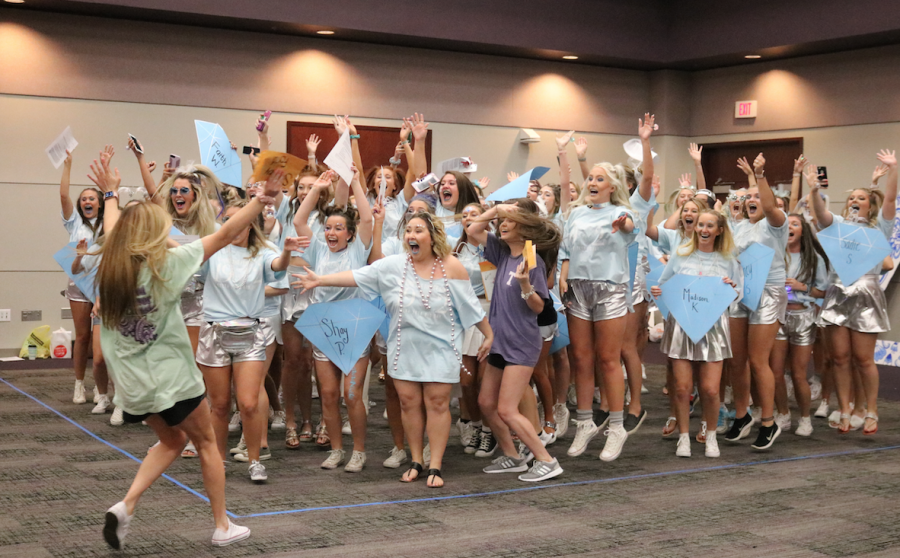 Delta Zeta Sorority cheers for Shelby Ford who just accepted her bid into the sorority.

Of those 210 new Greek women, 42 women were welcomed at Alpha Gamma Delta, 40 women were united with Alpha Omicron Pi, 41 members found their home at Delta Phi Epsilon, 44 women were lovingly introduced to Delta Zeta and 43 women met their new sisters at Phi Mu. With these new members joining their new homes within these organizations, the overall number of Panhellenic women has increased to 673 members at Tarleton.

“This is my first recruitment from the Panhellenic side, but I feel like recruitment went very well,” Stephanie Chambers, the new Assistant Director of Fraternity and Sorority life, stated in an email communication. “It was amazing to see our student leaders put on such a large event.”

“Recruitment could not have gone better this year,” MaKayla Arthur, Alpha Gamma Delta President, said. “The chapter as a whole has gotten much closer through the process by women beginning to open up to others whom they do not regularly talk to. Coming together and discussing why we all chose Greek Life and Alpha Gamma Delta highlights different connections and strengthens the bond between us. I am excited for the years to come and watch our new members grow and fall in love with the same sisterhood that I did.”

“I believe that this year’s recruitment went really well for my members,” Lauren Onstott, Alpha Omicron Pi President, explained. “This is our third year going through formal recruitment and I believe that each year we have personally been getting better and better. I’ve seen my girls grow and have (improved a lot) which I believe led them to do such a fabulous job. I do believe though that overall going through recruitment was different without Landry.”

Landry Underwood was the previous assistant director for Fraternity and Sorority life and Chambers’ predecessor.

“But we didn’t really notice a lot of change which I think was due to Brittanie Keener doing a fabulous job at planning and running the event.”

For those unfamiliar with recruitment, Potential New Members spend three days with the members of the five sororities in order to get to know them and the chapter.

“On the first night of recruitment, all PNMs go to all five chapters and learn about their sisterhood,” explains Chambers. “At the end of the night, PNMs rank the chapters based on those they would like to revisit the rest of the night.

“On the second night, the focus is on Philanthropy.”

Philanthropy’s are the service organizations that Greek chapters support throughout the year.

“PNMs have the opportunity to visit up to four parties, the number varies from PNM to PNM based on the invitations they receive from the chapters. PNMs rank the chapters at the end of the night again.

“The third night, Preference Night, is typically very serious and focuses on the values of each of the organizations. PNMs can visit up to two chapters on this night. At the end of the night, PNMs select the chapter they would most like to receive a bid from.

“Recruitment week ends with Bid Day. In the morning, all the PNMs arrive to the Student Center and are given their bids (basically invitations into the organizations). Organizations then go their separate ways and celebrate their newest members at Bid Day. Organizations typically rent out a space and facilitate interactions so that women can get to know each other.”

While recruitment spanned for only four days, the planning process behind recruitment took 10 months and 32 dedicated women.

“Panhellenic has an executive council of seven members and…26 Recruitment Counselors, also known as Rho Gams, all of which have been working on recruitment week for about 10 months,” said Chambers. “These 32 women disaffiliated from their chapters and coordinate everything for recruitment.”

Chambers added that the planning process included logistics for space, organizing the schedule of events, ordering the provided meals and giving counsel and support to the Potential New Members as they went through recruitment.

“Like every year, recruitment was only possible because of their hard work.”

“We had a number of women not complete the process, this is pretty typical,” Chambers stated.

According to Chambers, Recruitment Week began with 257 women registered and in attendance. Throughout the process, 47 PNM’s decided to not proceed with recruitment.