Blanca Izquierdo gets ready to serve the ball against Texas Woman’s University on Sept. 7, 2018 in Wisdom Gym. 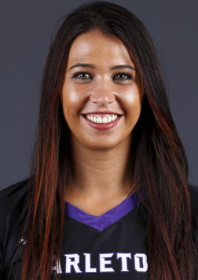 Photo courtesy of Tarleton Athletics
Blanca Izquierdo is a senior setter on the Tarleton State University Volleyball team and she hails from Madrid, Spain. She graduated from Malvar High School in 2011, where she earned Top Setter Honors in the Spanish Championship. After graduating, Izquierdo moved to America to play volleyball for Missouri State West Plains, where her team won the regional championship. The following year she began her career playing for Tarleton. Since she started as a player for Tarleton, Izquierdo she has helped her team win its first Lone Star Conference Championship and Tournament Championship. As a Junior she ended her season with a high of 20 assists at Texas A&M –Commerce.

JTAC: “What makes you passionate about volleyball?”

Izquierdo: “Sports are all about getting better every day. It is a personal challenge to become a better player, a better teammate and a better person.”

JTAC: “Why did you choose Tarleton for volleyball?”

Izquierdo: “I was at a junior college and I wanted to play for two years in the U.S. I love the way that people live volleyball here and the intensity. Everybody watches and everybody supports you. Tarleton reached out to me and offered me and my teammate from France a visit. We came together to visit and we love it. We love the team and we love the coaches. We love especially the environment when there is a game and the gym is packed. It’s amazing.”

JTAC: “How has being an international student affected your life on campus?”

Izquierdo: “It is hard because you lose perspective of what matters. When I talk to my family it’s like they took me from Spain and I got put in a completely different life. Sometimes it’s like I don’t even know who I am anymore because there are no links and no connections with my past here. It’s like starting over. I can be a completely different person here. People don’t know me or have any reference of who I am from my past. There is nothing. It’s also very hard when you’re having a bad day and you don’t have the family support. But it also helps you find in other people that support so there are two sides to it. But it is definitely hard.”

JTAC: “What have you gained from volleyball?”

Izquierdo: “Volleyball is like a meditation to me. Whenever I’m on the court there is nothing else. I can be having the worst day but when I’m on the court nothing else is on my mind. It’s like a medicine. Everyone should have something in there life that they can completely focus on. That is what volleyball does for me. Also, it gives me a lot of friends. Most of the people that I know on campus are because of volleyball. Not just my teammates but maybe they watch me play. It definitely helps you to make connections with people. I just love the game. Since I was little I have loved volleyball it’s not just because I play, I just really love the game itself. Most people in Europe are focused on soccer, but if you know the game of volleyball you will love it.”

JTAC: “What do you want to do after you graduate?”

Izquierdo: “I am deciding between going back to Europe to play professional volleyball for one year in France where I can learn French. That is something that I always wanted to do. Or I will stay in America to find a job. Those are the two options I am still debating.”

JTAC: “What would you say is your greatest achievement in Tarleton Volleyball?”

Izquierdo: “Well winning conference last year, but personally I would say my biggest accomplishment is being able to get out of my comfort zone. Even at my junior college I had created a small comfort zone with my host family and with my friends. Coming to Tarleton everything was new. I have been able to grow out of my comfort zone and started being able to stop doubting myself. Mentally I have gotten a lot tougher as a player.”

JTAC: “What goals do you have for the rest of your collegiate volleyball career?”

Izquierdo: “I always say that goals are limits and I do not like to have any limit because I think everything is possible. When everything is possible there is no limit. To me this team has no limit. We can win nationals and I say this because I mean it. Since that is the maximum we can accomplish as a team that will be our goal. Personally, it is the same. Whatever is the maximum achievement is my goal. If that is being All-American then that is my goal.”

JTAC: “What do you want Tarleton Students to know about you?”

Izquierdo: “I am a very friendly person. One thing I want them to know is that I love when people come up to me on campus and say “great game last night.” Sometimes people don’t do it because they are nervous talking to us but please do it because I love that support. That’s what keeps you going. Having people behind you that appreciate what you’re doing and understand that you’re a student athlete and that is a lot of effort. Whenever someone approaches you saying, “hey good game last night” it means a lot to us. Even if it doesn’t seem like it does it really means so much to us.”