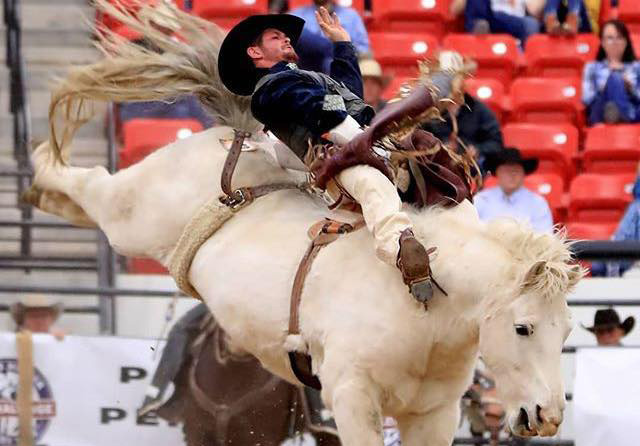 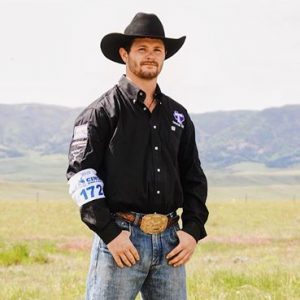 Berghuis began his Rodeo career during his sophomore year of high school in Atwater, Minnesota.

“My (younger) brother wanted to ride a bull and he ended up starting us out (into rodeo),” said Berghuis. “One day, I started high school rodeo right after my brother and it just took off and I wanted to ride bare horses.”

Much like anyone else trying something new, Berghuis encounter some difficulty starting off.

“I was awful,” Berghuis explained. “The first time I ever got on a horse, it came off the shoot and started running. I flew off the back and got kicked in the butt, did a complete backflip and landed on my face. But for some reason, in God’s will, I was like, ‘This is what I want to do’”

“I had met Richie Champion, and he said to come check out Tarleton,” Berghuis said. “I had decided to come and check out the school. I met Mark (Eakin) my head coach (and) a couple of guys from the rodeo team and (they) took us around campus and it was a very nice campus.”

From there, it wasn’t long before he decided to become a Tarleton Texan.

As the saying goes, a student’s worst year will always be his freshman year. This is no exception for Berghuis.

“Coming into Tarleton (Freshman Year) it was a very tough rodeo team and I was a little below average on my riding,” said Berghuis. “I got the chance to work with these guys and practice every day. Hanging out with them I learned so much about rodeo, how to ride, proper ways to practice, there’s so much going into it that it really boosted me up.

“I ended up getting hurt that year. I broke my wrist, so I ended up having to sit for a few rodeos and it kind of kept me from doing any good for the school, I thought. My first and second years weren’t very good. I didn’t ride very well. I was one place out of making the college finals my sophomore year and after that I took that pretty hard and I just said, ‘you know what? I’m gonna make the college finals.’

Despite the setbacks, Berghuis never let go of the horns and kept going strong, no matter what tried to keep him down.

“My senior year, I had gotten hurt on our first rodeo (of the season), I had ruptured my appendix,” Berghuis explained. “After going through that all year, I busted my tail to play catch up for the region (competition). Luckily (recovery) came out really well, I came back strong (and) healthy. Ended up second in the region (and qualified) to go to the (CNFR).

“When I go there, I had to turn everything around and believe in myself. ‘Just leave it all out there’ I told myself, ‘and to have fun.’”

“I got off (of my horse) I just stood up and I was jumping around and I saw everyone in the stands going crazy,” Berghuis said. “It was the coolest feeling ever, just knowing I’d won the college finals right there.”

“I (nearly) got bucked off of my victory lap horse,” Berghuis said, giving off a short laugh as he recalled the moment during an interview with The JTAC.

“With (Tarleton State University President) Dr. Dottavio there, it was really cool to have the support from Tarleton. The teachers and the president, it’s really cool to be a part of this school. I was glad to support and represent Tarleton.”

While Berghuis did pulled off such an amazing feat during his senior year, it was a long way to go before he would hang his hat up for the last time.

“After (the finals), Mark wanted to talk to me, and talked me into coming back to (Tarleton State) again for another year for my masters, which at that point I was stoked,” Berghuis stated. “We ended up second for the men’s team, and I definitely want to win first for the team together. We put in a lot of hours (and) a lot of focus trying to be the best that we can be and I feel like as a team…we have it in us to win the championships together as a men and womens team, with the coaches that we have, we can literally do anything.”