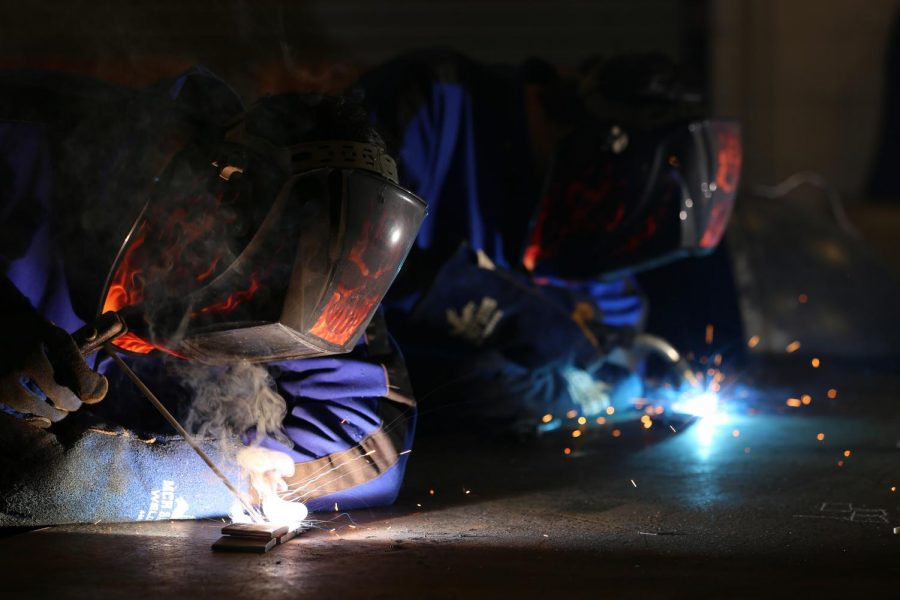 The welding photo that got Lauren Gajdica fifth place which was placed in a gallery in New York City.

Yet again, another student has gone above and beyond the expectations to achieve greatness. Freshman, Lauren Gajdica came to college already achieving her wildest dreams. However, she knew that a good education would be the key to her future success as a photographer.

In 2018, Gajdica graduated from Midlothian Heritage High School. There, she was able to participate in various extra curricular activities that would help to shape her future. She started out taking a basic photography class her sophomore year of high school and worked her way up to being the photography editor for her high school’s yearbook and newspaper. This was the foundation to her success. She was involved in commercial photography, a member of the year book staff, and then went on to be the leader.

Gajdica always had an interest in photography, but had never had the opportunity to act upon it until high school. She as heavily influenced by her teacher, Mrs. Rachel Kidder. Kidder gave Gajdica, and many other students, the techniques and the tools to help them grow as photographers and ultimately communicators.

“I had an amazing teacher,” stated Gajdica. “She really inspired me.”

Kidder was an excellent teacher to Gajdica because she became very involved in their photography experience. She was able to educate her students in a way that was fun and interactive. Gajdica was able to find her passion for capturing important moments.

Before graduating, she entered several photos into the Josten’s National Photo Competition. She took pictures surrounding academics and community service, which allowed her to send a message and communicate with her audience. Not only was she able to send a powerful message with her work, but she won 5thplace in the Academics and Community Service section, she also received an honorable mention. Placing in this competition was one of Gajdica’s wildest dreams. While placing 5thdoes not sound very significant to the ignorant ear, this was a hug success because this was a national competition that thousands of students entered.

“All of the photos that received first through fifth place in all of the different categories had their work shown in a gallery in New York,” explained Gajdica. “It was so exciting.”

Gajdica and her parents traveled to New York to see her work presented in the gallery. While she had only just graduated high school, Gajdica already achieved this was a major bucket list item.

“Having a picture in a gallery in New York is like a life long dream for me,” cheerfully stated Gajdica.

While Gajdica knew that she had won 5thplace in the national competition, seeing her work in the gallery was a total experience. She was able to see first hand how successful she was, while also seeing the work of the other competitors. Gajdica explained that the moment when she saw the work in the gallery was life changing and extremely fulfilling.

Not only is this a life long dream, but it is also a mark that will continue to help Gajdica’s work stand out in her future careers. Gajdica is a marketing major and she is a student worker in Student Affairs for Marketing. She loves this job because she is able to use her talent of photography and gain experience for her future career.

Even though Gajdica is excellent at photography, she decided to be a marketing major instead of an art major because she likes the diversity that marketing gives her. For example, she can later decide if she wants to take pictures for a company or just for herself. This gives her a variety of tones to communicate with her audience and create a variety of connections, which truly gives her the spark to continue to communicate.

However, this is not the only awards that Gajdica has won. She also received the Excellence award at the Journalism Excellence Association National Conference.  She also received 4thin the state for Theatrical Design in University Interscholastic League (UIL). Among other successes, this was another example that encouraged Gajdica to continue to follow her dream of doing photography. But, she could not have done it alone. Two of her biggest fans are her mother and father. They were thrilled for the opportunity to take Gajdica to New York to see her work.

While she was in New York, she was also able to sight see and her parents took her to the Broadway showing of Mean Girls, go to the 9/11 Memorial, see the Brooklyn Bridge, and more. Her photograph was in the Gallery of the All American Film Festival Photog Fest. This gallery was a sight to see in itself. This time with her family was exceptionally important to Gajdica because she was able to bond with her family and they were able to congratulate her for her success.

“My parents have always been my biggest supporters and they have always encouraged me to reach for my dreams,” said Gadjica.

Additionally, Gajdica also has family at this university. Her sister, Robyn Gajdica, is also attending Tarleton. When asked, Gajdica explained that she toured other universities, but that when she was here, she felt like she was home. She appreciated that Stephenville is far from home, but not too far. She loves this school, plus she is able to be with her sister and be close to home.

“I toured the campus and it already felt like home,” Gajdica stated.

Gajdica will graduate in 2022, but she has big plans for her time at Tarleton. She wants to continue to be successful in her classes as well as at her job. She loves the people that she gets to work with and the opportunity that working has provided for her. She has lots of opportunities for after she graduates and she is open to where her future will take her. She knows that she wants to do photography for a long time and she is excited about her future. Overall, she has already been awarded highly for her success, which has given her the affirmation that being photographer is the future for her.