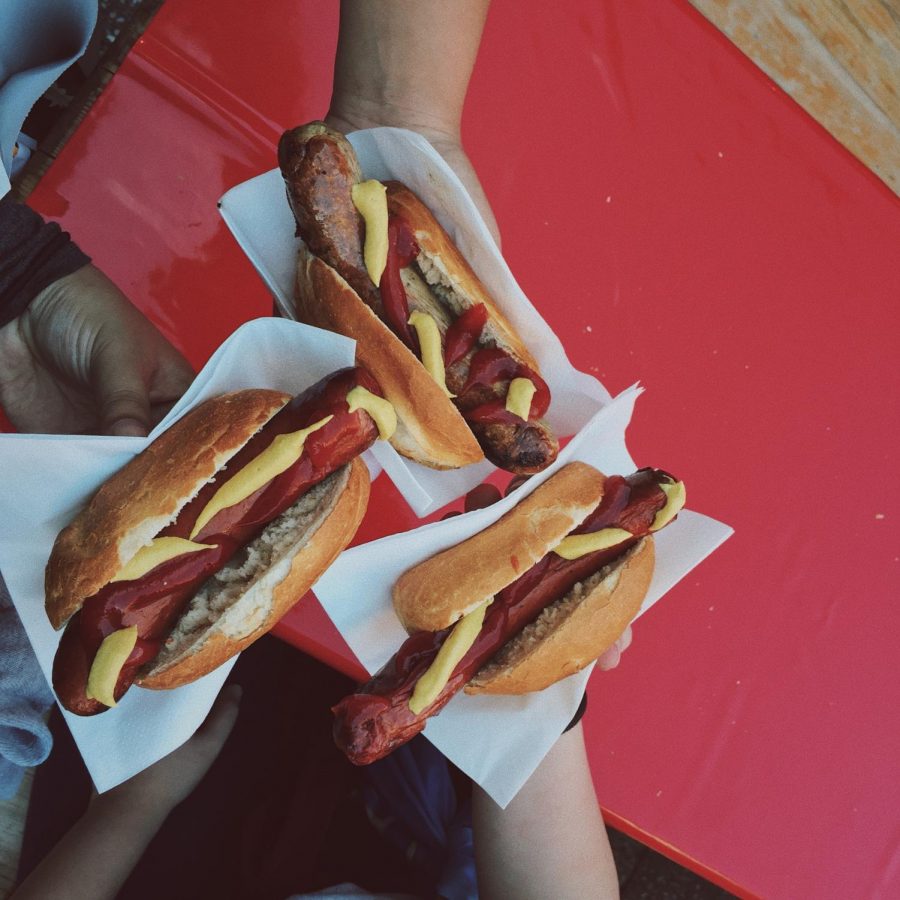 A photo of a group of people holding hot dogs.

Is a hot dog a sandwich? A question that has been discussed and is considered a philosophical divide can be a tough to answer for some.

The editors here at The JTAC have some very strong opinions about this discussion and thought it would be interesting to see if our readers feel the same way as we do. Our staff is divided on whether a hot dog is a sandwich or not.

What classifies a sandwich as a sandwich? According to Dictionary.com a sandwich is “two or more slices of bread or the like with a layer of meat, fish, cheese, etc., between each pair.” While a hot dog is defined as “a sandwich consisting of a frankfurter in a split roll, usually eaten with mustard, sauerkraut, or relish.”

A hot dog is it’s own category of food it can’t be combined with either of those categories. I have never heard someone say “Oh I really want a sandwich guess I’ll go get me a hotdog.” No. That is not something anyone should or would say. A hotdog is made up of a hotdog bun with a hot dog inside while a sandwich is two slices of sandwich bread and sandwich meat. But according to the definition given they are technically saying that yes it is a sandwich, but it is different due to the ingredients.

In 2015, The National Hot Dog and Sausage Council released a press release stating that although the definitions for both are similar a hot dog is just simply a hot dog.

”Limiting the hot dog’s significance by saying it’s ‘just a sandwich’ is like calling the Dalai Lama ‘just a guy.’ Perhaps at one time its importance could be limited by forcing it into a larger sandwich category (no disrespect to Reubens and others), but that time has passed,” NHDSC president and ‘Queen of Wien’ Janet Riley says in the release.

While in November of 2018, Oscar Mayer stated that they believe that a hot dog is a sandwich.

There has also been discussion about if a sandwich is the correct thing to compare a hot dog with. Some people believe a hotdog is the same thing as a taco, sub and or a burger. However the best place for a hotdog to be is its own category.

While this is trying to classify if a hot dog is a sandwich there are multiple other things that could be defined as something else. Such as, can a poptart be considered ravioli? Can cereal be considered soup?  Is water wet? Is cheesecake actually cheese pie?

We were interested in what our readers thought so we posted polls to our Facebook, Instagram and Twitter accounts to see what their thoughts were. When we looked at the poll the combined total of votes was 136 voters. Out of 136 voters, 15 people agreed that a hotdog is a sandwich and 121 people do not think a hot dog is a sandwich. This means that over three-fourths of our readers believe a hot dog is not a sandwich.

Although this was not a representative sample, for the readers of The JTAC it is safe to say most people believe that a hotdog is not a sandwich. Also lets remember people are entitled to their own opinion, just because if might differ yours does not mean they are wrong.

Thank you to those who participated in the poll. Let us know if there are any topics you would like The JTAC to cover or discuss.