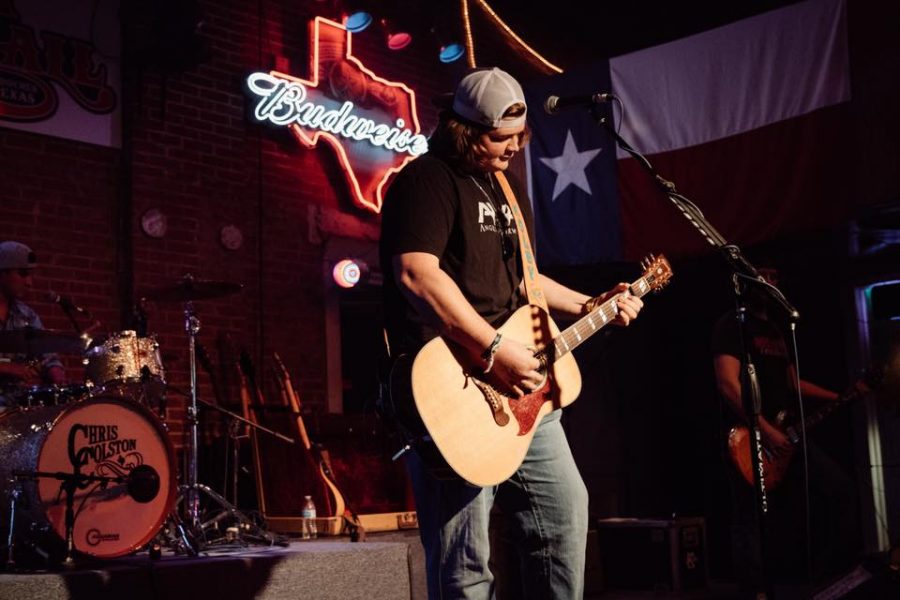 Kolby Cooper playing at one of his concerts.

Palestine, Texas native, Kolby Cooper has been singing since he was 12 or 13, “I started writing around the same time but none of my first ones I wrote were any good, like at all,” Cooper said.

Cooper is 19 years old and is already gathering a name for himself. His music on Spotify has over 100,000 streams and two of his songs, “It Ain’t Me” and “Every Single Kiss” have over a million streams.

“I believe our biggest hit so far is ‘It Ain’t Me’ its racked up over two million streams across all of the streaming platforms,” Cooper said.

His music is reaching people over the United States, after releasing his first extended play (EP), “Vol. 1 EP”, in the spring of 2018, Cooper was hearing from people in like California and New York on how much they love his music.

“Our EP has done absolutely amazing for us,” Cooper said. “I never would’ve dreamed that we’d be getting to play these huge festivals all over Texas less than a year after releasing it.”

In interview with Texas Music Pickers, Cooper expressed his thoughts of the new EP, “With this being our first release, we are really just hoping that everyone can listen to it and find a song or two that they can relate to.”

Cooper also told Texas Music Pickers that they have plans on putting out a Vol. 2.

Every artist has their role models; however, Cooper would call them his hero’s.

“My heroes to me are my dad, Waylon Jennings and the guys from Cross Canadian Ragweed,” Cooper said. “Because my dad introduced me to Texas music and Waylon has been my favorite since I can remember listening to music and Ragweed was the first Texas/Red Dirt band I got into. Those three are the one of the main reasons I do what I do.”

When you ask Cooper to describe his music, he would say the style is modern country mixed with older country.

“Describing the sound of music is simple for me,” Cooper said. “It’s really a combination of my two favorite genres rock and country.”

As Larry Joe Taylor Texas Music Festival is quickly approaching, Cooper and his band are getting ready to hit the big stage.

“I’m extremely excited to be playing big stage at LJT this year,” Cooper said. “It’s a festival that everyone who’s ever wanted to play in Texas dreams about playing, we’re definitely blessed.”

Cooper told Texas Music Pickers he is looking forward to playing many shows in the future and getting his music out there.

“I’m just looking forward to releasing this new project that we’ve been working on,” Cooper said. “I really poured my heart out into these songs and I believe once you hear them, you’ll be able to see that!”

So, Kolby Cooper fans be on the lookout for new stuff coming soon as well as his show at LJT Thursday April 25.