Hogan to lead athletics in Marketing and Broadcasting 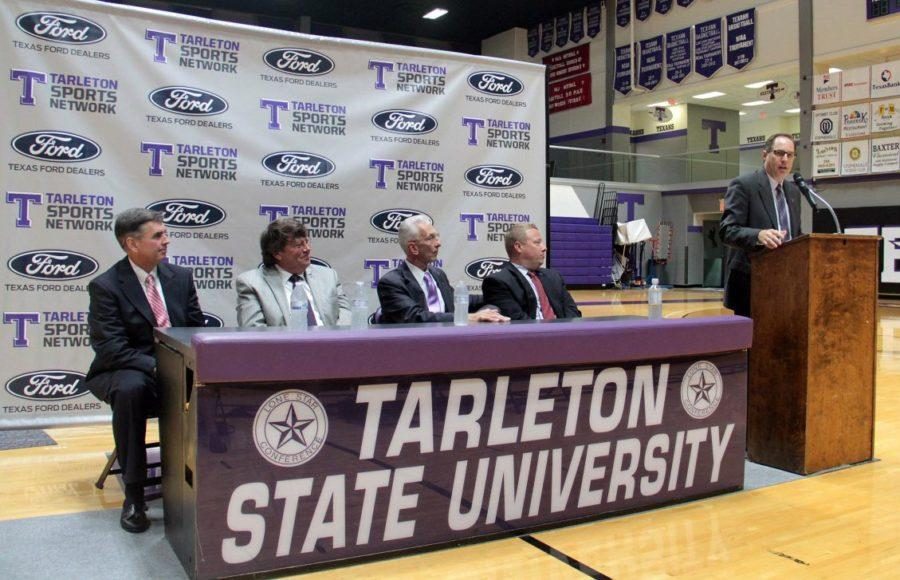 With a thrilling heart and a passion for Tarleton State University Athletics, Casey Hogan returns to the purple and the white to serve as the assistant athletic director of marketing and broadcasting. Hogan has been a member of the Tarleton Family during many points of his life and he is ready to pick up where he left off.

“I am very happy to be back and blessed I was the one selected for this role,” said Hogan.

As the assistant athletic director for marketing and broadcast, Hogan will be overseeing all marketing and broadcasting for Tarleton Athletics. This includes developing advertisement deals as well as overseeing Tarleton Sports Network and all radio broadcast within. With such responsibilities, his plan for Tarleton Athletics will be to find a way to attract more people to attend Tarleton’s games.

“I will be focusing on how do we drive fans to the game,” said Hogan. “How do we increase attendance? How do we improve our fan experience during a game?”

His current ideas include utilizing the video board in Wisdom Gym and installing a fan rewards program.

After graduating from Tarleton with a political science degree and working on Capitol Hill in Washington D.C., Hogan returned to Tarleton in 2012 to conduct developmental work for the Athletic department. From 2012 to 2016 Hogan worked on many developmental projects for the athletic department such as the rebranding and establishment of the Tarleton Sports Network with sponsorship by the North Texas Ford Dealers being one of his developments. During this time, he also broadcasted many of the athletic events on the radio, thus earning him the title of The Voice of the Texans. Hogan’s work in development and broadcasting has resulted in Hogan being awarded the 2013-14 Lone Star Conference Broadcaster of the Year title.

Hogan left Tarleton following his success to pursue a career in corporate sales. He was employed as an account manager for an IT company in Dallas, Texas.

While Hogan worked into a successful career in Dallas, he has found himself longing for the moments he had while at Tarleton.

“I really missed working in collegiate athletics. I missed Tarleton. It just wasn’t the same,” said Hogan. “There was an opportunity to come back and I was ready to come home.”

This opportunity came in the form of a communication between Hogan and Athletic Director Lonn Reisman, who informed him of the opening of a new position within Tarleton Athletics.

“[Reisman] let me know that they were looking to add someone that would be an assistant athletic director for marketing and asked me if I wanted to apply for the position,” Hogan said.

Hogan added that after much discussion and consideration he expressed his interest in the position knowing it was the right choice for him.

“My junior year in 2006 I got involved with Tarleton sports radio broadcast through a local radio station that at the time broadcast the games,” said Hogan.

While Hogan carries many ideas and much drive to help Tarleton Athletics grow, he is grateful for what has been presented to him.

“I want to thank Dr. Dottavio and Coach Reisman for giving me the opportunity to come home,” said Hogan. “I’m just excited to be back home and to help student athletes and help our coaches be successful in competition and in the classroom. That’s really, at the end of the day, what this is all about. Giving them the tools to succeed and I’m exited about it. It’s great to be home.”