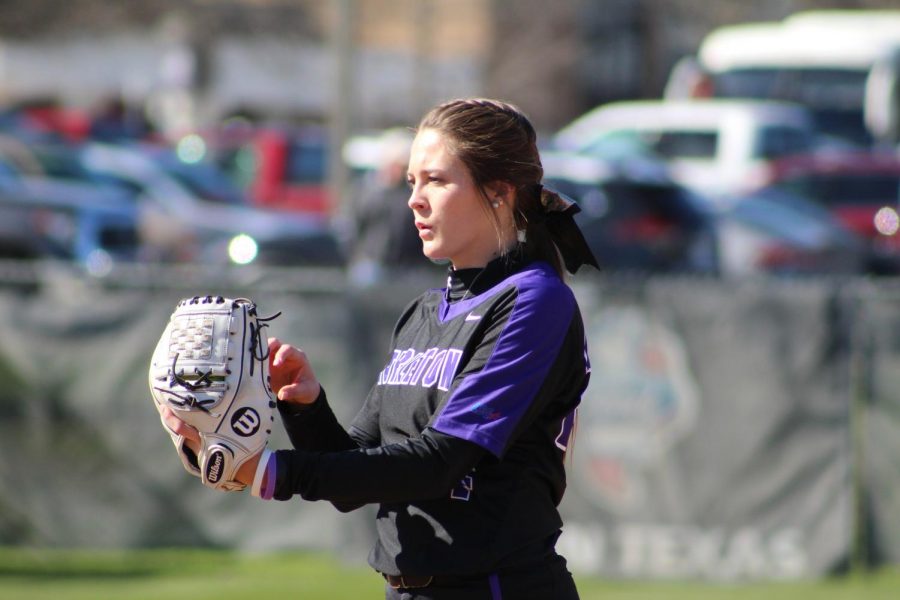 Pitcher Jordan Withrow, getting ready to throw the first pitch of the sixth inning.

“I thought that it was a great honor, but all of those awards are based off of last year and our performance last year,” Withrow said. “It’s an entire new season so it’s going to depend on how hard we work now and what foot we put forward now. I mean it’s great, it’s such a great honor but this is a whole new season and it’s something to work for.”

Withrow has been playing softball all her life since she started tee-ball at five years old.

“It was something that all my family, we are very sport orientated so everyone plays something,” Withrow said. “I started when I was five and just never stopped.”

During her freshman year at Tarleton, Withrow had an outstanding first year. She played in 23 games and started 17 of those. Her stats are a true test of her pitching ability, according to Tarleton Athletics, Withrow boasted a 2.57 ERA in 111.2 innings of work and led the team with 103 strikeouts. Throughout her season Withrow made many accomplishments, she threw her first complete game shutout against Texas A&M International on March 13 and had struck out a season-high 11 at Cameron on March 10.

Her sophomore year was just a continuation of her success at Tarleton. She helped lead the team to 50 wins for the first time in the program’s history. According to Tarleton Athletics Withrow had a 26-6 record in the circle with 221.1 innings of work and 252 strikeouts and became the first pitcher in the program to strikeout 200 batters in a single season. With her 26-6 record, 25 of those were complete games and six of those 25 were complete-game shutouts. Withrow gained many accomplishments, she broke two single season records when she started 34 games started and had 252 strikeouts. She moved into fourth place all-time at Tarleton in career strikeouts with 355 and 9 complete-game shutouts. Her accomplishments even went past just Tarleton, she was the LSC Leader and No. 7 in the nation in pitching victories and the LSC Leader and No. 5 in the nation in strikeouts.

Withrow has her whole family in her corner.

“My family is definitely like the biggest support group I have,” Withrow said. “My parents and my grandparents all sit down and get a calendar out and decide which game that they can come to, to make sure that my sister and I have somebody there to support us.”

However, Withrow would say her grandpa, papa John, is her biggest softball person in her life.

“He’s been like the catcher for me like ever since I was little, the first time I started to pitch and he’s just like taken every single step with me along the way,” said Withrow.

Withrow’s cousin Ashley Anderson is her biggest motivation, Anderson at the age of 24 was diagnosed with leukemia.

“Her fight through leukemia and then when she went into remission, to when it came back and got her bone morrow transplant,” Withrow said. “Seeing her fight, seeing her will to live and when she put her faith in God, that is just the biggest motivation for me.”

Withrow’s cousin grew up wearing number 24 and after she was diagnosed with cancer Withrow took it over.

Almost every player has something to help them get ready for games or any pre-game rituals. Withrow has her own way of pumped before games.

“I listen to a lot of Lecrae and you know like Christian ‘hype’ music and that just gets me going and gets my head in the right place,” said Withrow.

After her and the team’s success last year Withrow is definitely ready for this season and to get back out there.

“Since last year I think we have grown in our confidence. I know that last year we had like all these goals to get to where we were,” Withrow said. “But this year it’s like ‘okay, we know we can get there now let’s go farther,’ like last year we set a lot of standards for this team and this program and this year we are going to strive to push past that.”

Withrow believes she was blessed to never experience something that made softball unfun for her.

“There are a lot of hard days especially in the off season and everything but everyday you’re like ‘oh man that was tough, but you know let’s go out and do it again tomorrow,’” Withrow said. “So, there is definitely a ton of hard days, but I am thankful enough to never have that one situation that really like kind of made me question ‘do I want to continue’.”

Even when times get rough Withrow keeps a positive look at everything.

“I would say something that I also use like every day to get myself through my hard times, is Philippians 2:14 and it says, ‘Do everything without grumbling or arguing,’” Withrow said. “And that is something that I constantly have to remind myself of.”