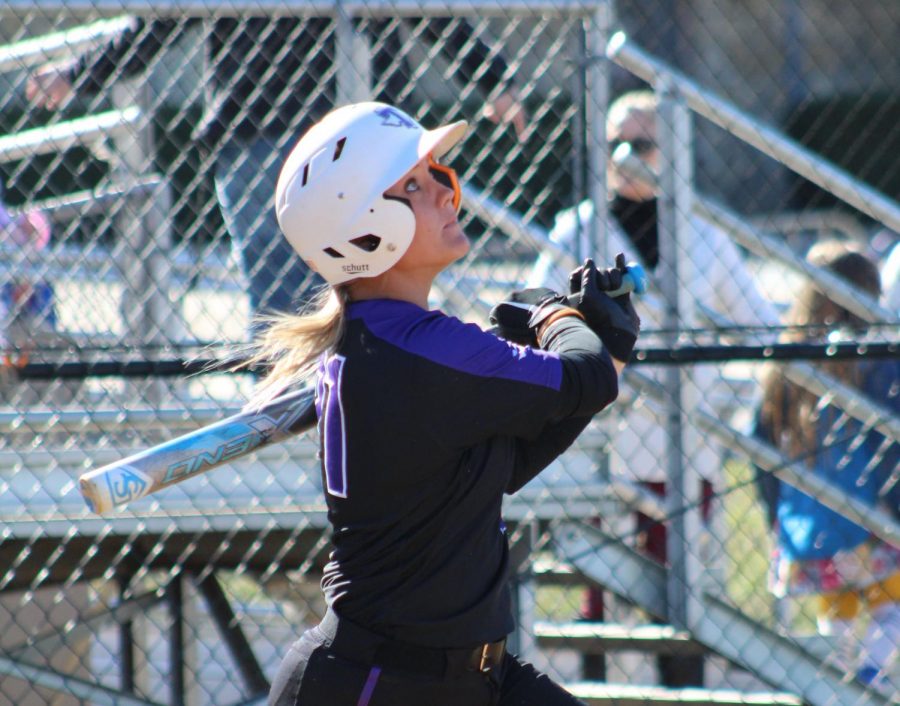 Senior Karli Herron, at bat during the first home series of the season against Texas A&M - Kingsville.

Senior infielder from Hot Springs, Arkansas, Karli Herron has been playing softball since she was five after her seeing her brother play baseball.

“My brother, he is nine years older than me, I have always looked up to him as one of my role models,” Herron said. “He was number 21 and he played baseball and so I knew that was what I wanted to do because he did it and so that’s where I got my number and that’s why I started playing.”

Before coming to Tarleton State University, Herron played her sophomore year at Stephen F. Austin (SFA) and started 22 games. According to Tarleton Athletics Herron had nine hits in limited at bats with a double, a home run and three RBI and boasted a 1.000 fielding percentage with 23 putouts and 1 assist. However, SFA was not the right choice for Herron as it was not what she thought it would be.

“It was kind of one of those rational decisions to go there because in my head I was thinking ‘oh its D1, like oh I made it’ and then I got to SFA and it wasn’t the right fit I didn’t go for the right reasons,” Herron said. “Then when I came on my visit to Tarleton, I had a few girls that I’ve already known so I’d been talking to them and once I came on a visit it was a perfect fit it was like my new home, so I knew as soon as I got on campus, this is where I was supposed to be.”

Luckily for Herron the transition was very easy and smooth.

“There were like six girls that played on our travel team when I was in high school and so it was a very natural move because I’ve played with these girls before,” Herron said. “I’ve played beside them on the field, so it wasn’t really like anything new, everybody was really welcoming. I felt like I didn’t know a stranger, the coaching staff was awesome. It was just what I needed to bring back the love for the game.”

Familiar faces in the stands can always help a player feel better and play better; luckily for Herron, her mom nearly never misses a game.

“I don’t know if my mom has ever missed a game but with me being from Arkansas it is harder for my dad to make all the games,” Herron said. “However, at the same time he’s always has our tv at home hooked up to the live and so I’m on his big screen in the living room. He calls me after the game, coaches me this, coaches me that. And, so I mean between them two I don’t know if I’ve ever had a game that there hasn’t been anyone there.”

Herron’s brother and stepdad both played baseball and her family can be very competitive, even when just playing games.

“My family we always go to the beach every year and we play spoons and like it gets so competitive,” Herron said. “We broke the glass table at our condo because me and my brother were going after the same spoon and he ended up not talking to me for like the rest of the night because I had gotten it.”
Herron’s sophomore year at SFA was not an easy one for her.

“My sophomore year, yeah it was probably my biggest hardship,” Herron said. “We had a lot of family stuff going on. My dad got in an accident and he was kind of on the brink of you know whatever.”

The hardships were not just personal, “between family, between softball, between being six hours from my home,” Herron said. “I kind of just felt like you know, ‘is this where I am supposed to be, is this what I’m supposed to be doing, should I be doing something else or is this as happy as I could be.’”

Herron thanks Tarleton and the softball program for helping her get back to loving the game and finding a home for the past year.

“And then you know, I came here I just re-fell in love with the game all over again and with the coaches, with the players, the girls,” Herron said. “When I found why I started and I had that love again, I realized everything I had been through, all the hardships, it was worth it.”

Herron’s junior was a collection of many achievements. Her first Tarleton hit was a home run which helped set the for the rest of her season. According to Tarleton Athletics Herron had 3 multi-RBI games, had 12 multi-hit games and hit .338 with 11 home runs and 41 RBI.

As this season is Herron’s senior year, her last year playing softball her last chance she views it as bittersweet.

“No, I am not ready for it to end but at the same time, like it’s my last year I want to make it count,” Herron said. “After this it’s the real-world stuff, big girl time and so for me this is probably my most important year because it’s my last year to something I love.”

College softball has been a rollercoaster for Herron, but she is ready to finish strong.

“These last three years have made me who I am,” Herron said. “But at the same time this is what I’ve worked for, my last year, this is the last time I’ll step foot on the field so might as well leave everything out there.”

When you go through hardships it can sometimes be hard to get back up or see them as blessings; however, Herron wouldn’t change anything.

“If I could go back, I wouldn’t do anything different,” Herron said. “I wouldn’t change the hardships. I wouldn’t change that I went to SFA because it made me who I am. Who knows if it would have brought me here if wouldn’t have gone there. Sometimes you have to experience the hards to get the goods. I am thankful for that.”

If you are superstitious you may tie your shoe this way, way your hair this way, or wear your bracelet on your right wrist and Herron has her own little things.

“I write on my visor and I write on the same side every time,” Herron said. “I also wear my hair the same way every time and I actually have a game day playlist I listen to it in the same order every time. So yeah, I’d say I’m pretty superstitious.”

After the successful year Tarleton had and Herron’s own personal success, she is ready for this season and the competition.

“We kind of have a target on our back, so at this point I think that everybody is looking for Tarleton, everybody’s watching Tarleton,” Herron said. “I think that we know we’re good, but we’ve got to put that in the back of our head and just look at the next 200 feet.”

The thought of “oh we’re good” can make a team too confident and then choke in a game.

“We’ve got to look at the next game or the next practice or the next pitch,” Herron said. “The further ahead we get of ourselves the more overwhelming it’s going to get. And so, I think that if we just take one step at a time, one pitch at a time. We know we’re good, so we just have to go back to the basics and trust ourselves and trust our abilities.”

The softball team has started the year right with a winning record after only a few series. The wins come from dedication and hard work during practices, that are without a doubt hard physically and mentally.

“You are going to have hard days,” Herron said. “But it’s all about work ethic, it’s all about the love for the game. So, you put in your work, you put in your part, you realize what your role is, everything else will fall into place. If you love something go for it, don’t give up on it because at the end of the day it’s not going to be there forever.”

As the team continues the season, they will continue their hard work and fight. Herron gave an insight to what helps the team going and motivated.