From Bostocks to LJT: The story of The Cottonwood Crows 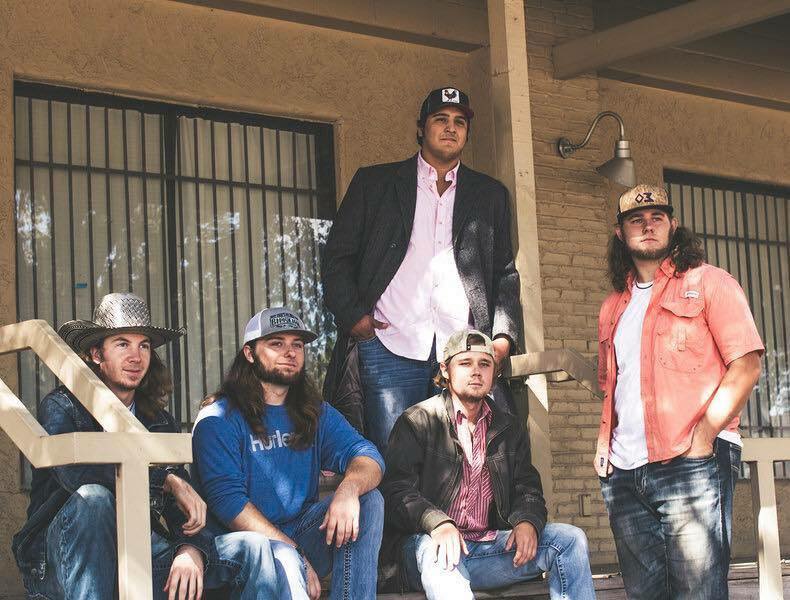 The Cottonwood Crows will be coming to Larry Joe Taylor Texas Music Festival on Saturday April 22 on the Hydro Pros Stage.

To a new artist, Stephenville is a great place to start a music career. Stephenville gives many options for artists to showcase their talent such as, Bostocks, City Limits, Twisted J and Larry Joe Taylor Texas Music Festival. The Cottonwood Crows took advantage of the music scene in Stephenville and started a Texas country band just for fun. Cottonwood Crows is made up of five guys who all met in Stephenville; Michael May who is lead guitar, Christian Gomez who plays guitar, Matt Hartman is lead vocals, Mason Brown is on the bass and vocals and Orlando Sanchez who is on drums.

Even though the band is only a few years old, Cottonwood Crows have been singing and performing years before forming their band.

“I have been singing for like five years, since I was in junior high school maybe longer than that,” Hartman said. “I have been performing for just as long I would say, five years here in Stephenville and like a year, year and a half maybe where I grew up.”

“I don’t even know how long I have been singing, as long as I can remember,” Brown said. “I have been playing with bands for maybe six or seven years.”

“I have been playing with the band for about five years,” May said. “Before that I just played my guitar in my house.”

“I have been performing for about seven or eight years, not like full time, ” Gomez said. “I started in Austin with my brother and then moved here.”

Gomez, May and Hartman have been in the band together for four years and Brown joined in on the fun two years ago.

Several other bands, such as Dolly Shine and Six Market Boulevard both started in Stephenville and Cottonwood Crows. The one thing all these bands had in common is a group of musically talented guys just wanting to play some music.

“I guess because we all enjoyed playing music together,” May said. “We wanted people to jam with, just wanted to have fun and we kind of found each other.” Gomez and Hartman both joked that their reason to start a band; to get chicks and money.

When starting the band, Crows looked up to artists like Ryan Bingham, Cody Canada and Six Market Boulevard. However, they have always looked to their families for inspiration and support.

“My mom and grandma,” Hartman said.

“My mom or my brother,” May said. “They’ve definitely supported us throughout the years.”

“My mom, my dad and both my step parents,” Brown said.

Cottonwood Crows is an odd and unique name and the way the name came to be is just as odd.

“It was my brother’s bass player, they were changing the name of their band and they changed it like eight times in five weeks and they started getting mad and picked a name. We were sitting in Glen Rose on fourth of July at a festival, their bass player was like we should change our name to Cottonwood Crows and everybody just laughed and was like we’re not changing the name again,” Gomez said. “Well then one day me and Matt met each other when we moved in and it was that first weekend of move in and that Sunday they had an open mic night at Bostocks and me and Matt went up there to play and there’s a guy that booked on Wednesday nights and came up to us and asked me if we wanted to play and we were like yeah sure and he was like well I need a name and I was like ‘oh crap’ and so I started texting all my friends from back home and my brother’s bass player was like just say Cottonwood Crows and I was like we’ll take that and change it later or something and it just never changed.”

With 2019 already in full gear, Cottonwood Crows has a busy year ahead of them. To new music, festivals, concerts and even school for a couple of them. Hartman says it’s going to be a busy year and Gomez and May agreed it being busy and busy with school.

“We got some really good stuff coming up,” Gomez said. “We just got the confirmation for Larry Joe Taylor Fest, we got stuff in the summer time with Wade Bowen and just a few other pretty big stuff coming up and festivals. Festival season, thats always a good time to actually be apart of it this year, bigger festivals we always attended to but never played and now we actually get to be apart of.”

“We also have a single coming out,” Gomez said. “Coming out real soon.”

With new music coming out, the band puts their own twist on their sound; it’s not like any other band.

“I think we sound like the Cottonwood Crows,” May said. “Everyone has their own musical preference of who they grew up listening to and everybody kind of draws from that so with that combination we kind of get our sound.”

“There is really no way to describe it,” Gomez said. “It sounds different live than on the record but the record also has its own sound, it’s really weird. It changes all the time, it is just whatever we are feeling at the time, can’t really describe it.”

Like any other band, Cottonwood Crows just wants to get their music out there and to expand their fanbase and they continue to do so.

“I think the fan base is definitely growing at a pretty good rate,” May said. “We get to go play new areas, we had people drive two hours to see us the first time we ever played west Texas and people everyone are like ‘we’re huge fans’. We’re definitely expanding which is a great thing to see.”

“I think that our music with listeners is going good,” Hartman said. “We have a little thing where you can see like where plays are coming from, whos listens where, it helps out a lot to where we can be ‘oh there’s a lot of listens in Houston we can go play in Houston’ and it’s a good deal to where we know we’re actually connecting to people, we’re not just playing to nobody.”

When they guys started the band, no one expected it go the way it has gone. Just a group of guys wanting to jam to the same group of guys playing at LJT.

“Even when i joined i didn’t feel like we’d be here today,” Brown said. “Now you got the ‘Twist’ and that was a thing and now its Larry Joe Taylor.”

“It just keeps coming, more stuff keeps coming that seems so far fetched you know that four years ago we couldn’t have imagined,” Gomez said. “It was just more about having fun and playing music and just really that’s all it was, we did not expect to be where we are today.”

With LJT coming up fast, Cottonwood Crows are just ready to get on the stage and perform at a festival they use to go to and dreamed of playing one day.

“It’s a big deal to us to play this event,” Brown said. “Having a band in Stephenville and starting here, this is the ultimate thing it doesn’t get better than this in Stephenville, Texas.”

“Yeah, we’re still the babies of the scene which is kind of great for us,” Gomez said. “It’s a great feeling that they would even think of having us out, it was an awesome feeling when i saw the email.”

From Bostocks to LJT, Cottonwood Crows owes their success to those who have stuck with them since the beginning.

“Thank you, gracias, thank you in every language,” Hartman said. “We opened for Chris Knight at Bostocks when we had no business opening.”

“We sucked when we started out, it was bad,” May said. “Our original drummer had never played drums in his whole life, he started on a cajón and then we got a drum set like a month into it. We had to kind of teach him how to play and there was one beat he could play and everything had to be centered around that one beat and it never changed.”

“And by teaching him, we didn’t know how to play drums either so we didn’t really teach him,” Gomez said. “Thank you to everybody that stuck around, I’m sorry we sucked so bad.”

“We definitely had humble beginnings,” May said.

As the Cottonwood Crows look forward to playing at LJT and continuing to tour and adding venues to their list of achieved places. They all one day want to perform at Red Rock, main stage at LJT and Austin City Limits. Cottonwood crows urge listeners to go check out a live show and to look for new music coming soon.