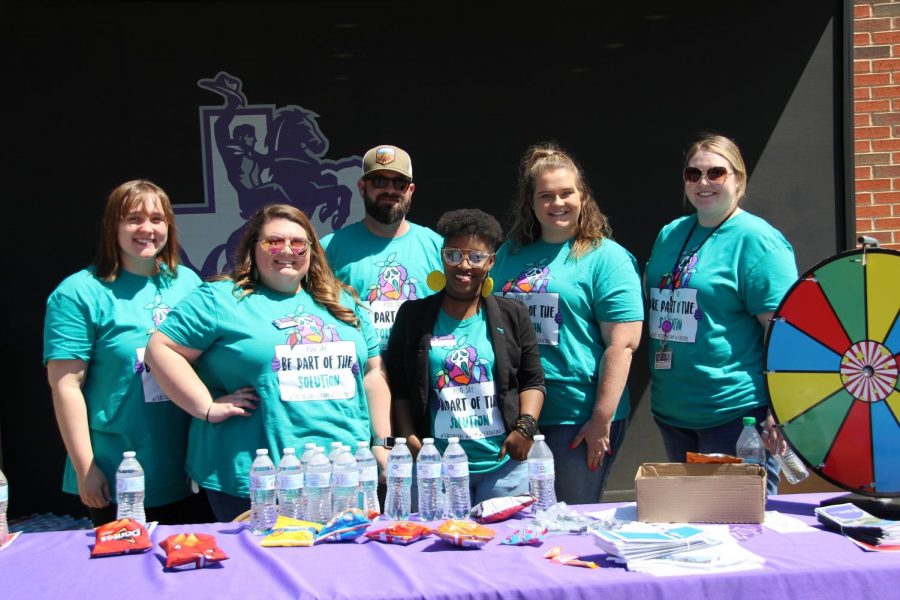 The Student Counseling Services has kicked off Sexual Assault Awareness Month for Tarleton State University. SAAM is an annual campaign which occurs during the month of April and is focused on raising public awareness about sexual assault and how to prevent sexual violence.

“Is Tarleton safe? I would say overall I think we have a very safe campus. There’s no community that exists in a bubble, so our campus community isn’t any more immune to problems than any other community,” said Caris Thetford, Assistant Director of Substance Abuse and Violence Prevention programs. “But what sets us apart a bit from many other campuses is the volume of work our campus does around the topics of violence prevention, suicide prevention and mental health and the many ways we share information and expectations as a community.”

In order to raise awareness during SAAM, student counseling services has planned a month full of events. The events which are held during SAAM are not only there to reach out to students who have been assaulted, but they are also there to help the family and friends of victims.

“Some come in seeking support to deal with an assault. Sometimes it’s something that happened long before they even came to campus; often it’s something they’ve kept secret and when they come across some of the information connected with SAAM, they realize they have confidential support through our office and that they don’t have to deal with this terrible thing alone,” said Thetford. ”Sometimes students find their way here after we do outreach because they’re interested in getting more training or bringing training to a group they belong to. Sometimes they come in because they have a friend or family member who has disclosed that they’ve been harmed in some way, and the student wants to know how to help them and to get information and resources they can share with their loved one.”

While Tarleton has always had efforts to prevent sexual assault and recognized SAAM for many years, Thetford would attribute much of the success of the month due to how enthusiastic Tarleton has been to embrace SAAM.

“My position was created with the intent of having a person to focus on prevention and awareness efforts and that helped because there was a point-person to coordinate efforts across campus,” said Thetford. “Almost from the minute I started in my position on campus, I started getting phone calls and emails from people around campus who wanted to support prevention and awareness efforts, who were willing to devote time and resources to doing so. Caleb Chapman and the students and full-time staff in Student Affairs Marketing have played a huge role in expanding SAAM efforts around campus.

“We’ve had help from the team in the university marketing department to infuse messaging into campus-wide communications. Donna Savage and her staff in the library have been ardent supporters from day one. They help with our Green Dot bystander training, they create displays for SAAM in the spring and Domestic Violence Awareness Month in the fall; they send their student workers to prevention trainings, etc. Dr. Winslow in the Communications department has partnered with us to support DVAM and SAAM efforts and has created opportunities for her students to work on projects with our office as class assignments; Dr. Stephanie Robertson and others have offered extra credit for students who participate in our Green Dot bystander trainings,” said Thetford. “Our athletics department is helping with our kick-off event this year and participating in Teal Tuesdays and they are sharing information throughout the department. Our Greek community has helped with awareness efforts both in-person and online. The Purple Poo have posed for ‘Teal Tuesday’ photos and created Poo signs promoting being an active bystander. That’s not a comprehensive list – there are many people across campus who have joined in our SAAM efforts in ways big and small, who have come up with creative ways to support survivors, to promote being an active bystander and to dispel myths and misinformation about this challenging topics and I couldn’t possibly list every single person here. This isn’t a Student Counseling Services initiative at this point. We have the honor of ‘leading the charge’ if you will, but this is a campus-wide effort that has taken root because of our community’s commitment to and investment in this issue.”

As a result of the efforts of SAAM due to the widespread support at Tarleton, counseling services receives an increased number of students who reach out.

“The most common situations we see related to sexual violence fall into two broad categories. The first is students who suffered harm before they came here and when they get out of that situation, they start the process of healing and figuring out how to move forward from what happened in the way that’s best for them,” said Thetford. “The second situation we see, which applies to students who were harmed before coming here as students and who have encountered harm during the time they are a student, is that they were hurt by someone they know.

“Sometimes this happens within a romantic relationship – we know domestic violence and sexual assault are interconnected issues. Sometimes it’s an acquaintance and often that happens in a party situation. This is where substance use and violence intersect. Alcohol does two primary things in this context: one, it provides the camouflage for an assault to occur. If it’s 2 a.m. and people have been drinking – and especially if they’ve never had any type of training on this topic – it’s less likely they will notice the warning signs of a potential assault,” said Thetford. “Two, alcohol provides the weapon by which a person can incapacitate another person. The idea of the stranger breaking into your home or jumping out and grabbing and assaulting you is a prevalent one when we think about sexual violence. Certainly, those situations happen occasionally. But the vast majority of assaults are perpetrated by a person who knows the victim, who has power over the victim in some way (because of differences in sobriety levels, size, status, etc. – there are many ways power imbalances occur) and they use that power to take advantage of the vulnerable person.”
For more information on SAAM you can attend one of the many events during April. For individuals interested in reaching out, students can call Student Counseling Services at 254-968-9044 at any time of the day and will receive a response.

“So if a student is struggling at 2 a.m., if they call our number, they will be able to speak with a licensed mental health provider. The service that we contract with to provide that 24-hour coverage (called ProtoCall) will send us a report after the phone call, so we can reach out to the student the following day. If there is an immediate need, ProtoCall will contact us and a counselor or advocate will come to campus,” said Thetford. “So for example, if a student is assaulted and it’s 2 a.m. and that student isn’t sure what to do, they can call our main number, ProtoCall will get in touch with us and we will get an advocate to the student to start the process of addressing immediate safety needs, medical care, and whatever else the student needs. Students can also call or come by to make an appointment with a counselor or an advocate. Again, if it’s an urgent situation, we will make sure someone meets with the student before they leave our office.”