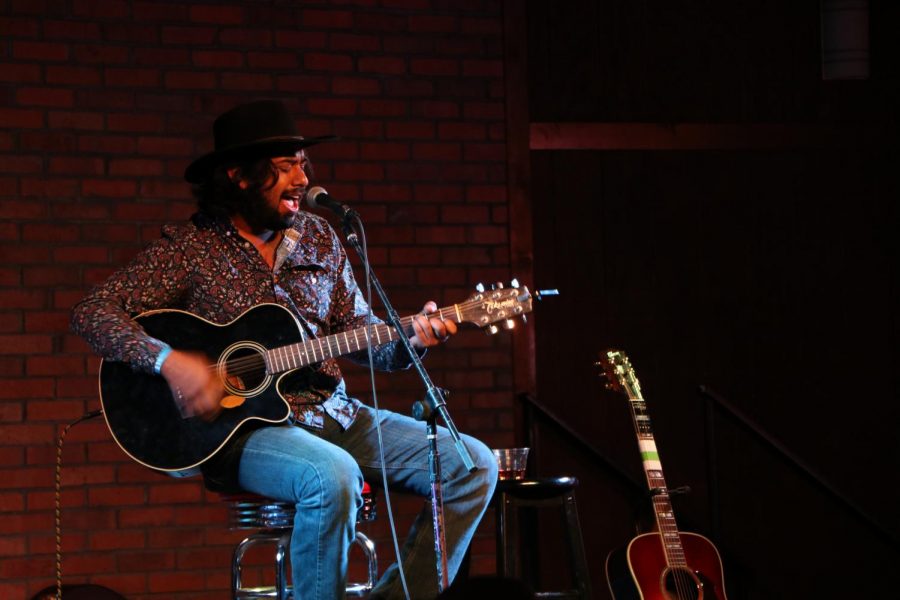 Every year Larry Joe Taylor hosts a songwriter showcase and the winner of the showcase gets to perform at Larry Joe Taylor’s Texas Music Festival. This year there were six finalists who got the chance to perform their own songs in front of a crowd of Texas music fans. The winner of this year’s showcase was Nyles Robakiewicz a San Marcos, Texas native. Robakiewicz has been writing since he was 12 years old.

“I have always written guitar stuff and musical stuff, but I didn’t start writing lyrical songs till I was about 17 or 18,” Robakiewicz said.

Getting into the music industry is no easy task and Robakiewicz started trying at a young age.

“When I got out of high school I went to college in San Angelo for a year and that was where I was first exposed to Texas music. Once I started getting exposed to Texas music I wanted to join a band and I wanted just to be guitar player,” Robakiewicz said. “After playing guitar for a while we couldn’t find a singer so I started singing songs and we started realizing that we couldn’t play covers for the rest of our lives if we wanted to do anything with it. That’s when I started really getting into song writing. I started listening to all the influences and the people that I really liked, there was a guy named Jason Isbell who is a really good songwriter. Then from then on I realized that songwriting is what facilitates musicians to be able to go out and play. I really fell in love with that and I ever since then I kind of stayed dedicated to song writing as much as I can be.”

Robakiewicz didn’t know about the showcase until his manager urged him to sign up for it.

“I actually didn’t know too much about, we have a manager who is trying to help us out as much as possible. We’ve been playing as a band for four years now and playing anywhere we can,” Robakiewicz said. “When he heard about it, he thought that I’d be a good fit for it and I am glad that he did because as soon I entered it, I got real excited about all the musicians involved with it. When we figured out that it was more than a competition but actually a showcase of song writing I thought that was a really cool idea so I was really, really happy to be a part of it.”

Many artists write from their heart and life experiences and Robakiewicz does exactly that.

“I try and write as much as I can about things that happen in my day to day life,” Robakiewicz said. “For this album that we (the band) are going to be releasing, everything was either situations that I have dealt with personally or situations that I have been really close or seen someone deal with personally. It kind of centers all around what is going on in my life or people I’m close to lives.”

Jason Isbell is not the only artist Robakiewicz looks up to, bands like Whiskey Myers and Turnpike Troubadours

“Initially, one of the bands that got me into playing music was a band named Whiskey Myers. I grew up listening to country music but as a guitar player also really fascinated by rock and roll,” Robakiewicz said. “I went to a Whiskey Myers concert and I saw what they do with their show and I was just enamored by it so I started listening to them. That kind of got me on the older stuff, southern rock kind of stuff. Turnpike Troubadours were a really big influence on me, they were the first band that I saw that could capture an audience with music as well as their lyrics. Isbell was probably the biggest influence on me as far as really wanting to pursue a music career.”

Winning the showcase came as a shock to Robakiewicz, he never thought that he would win.

“Very surreal, still hasn’t fully sunk in. When you are in that kind of environment and with the talent is as high as it was, when you are sitting there listening to all the great singers and songwriters, it kind of makes you doubt yourself a little bit and just be happy that you are involved with it,” Robakiewicz said. “When they announced the second place winners, I remembered kind of feeling like ‘well I guess you know that’s it, I didn’t win, there is always next year, we’ll just keep doing what we’re doing,’ and then I hear my name and associate that with the band that I play in, that was something that was very, very exciting and kind of a reassurance of the work that has been done.”

Writing songs is never easy and even though Robakiewicz won the LJT songwriter showcase he still has his challenges.

“The hardest thing for me is to try and say something that has already been said in a different way,” Robakiewicz said. “The hard part becomes explaining those day to say situations in way that is more than just laying it out flat, trying to come up with a way to say something that intrigues people or maybe make them want to sing it back.”

With winning the showcase Robakiewicz gets to play at LJT, an opportunity he is excited about.

“The LJT festival, anyone who plays in the Texas scene knows about LJT and how big it is, how fun it is and how many people are out there,” Robakiewicz said. “The biggest thing we are excited about is going out to meet a bunch of people who appreciate Texas music. We are real excited to get out there and play in front of people more willing to listen to what we are working on.”

Robakiewicz and his band get studio and recording time with Josh Serrato at Melody Mountain Ranch studios where they will record their album and he gave The JTAC a little insight of what the album will be like.

Robakiewicz and his band has been together and performing for four years but they are not known and he wants listeners to know that they try and make everything as genuine as possible.

“Most of my influences, the reason that they are influences to me because they don’t seem like they are faking anything. If listeners can take anything away from what I do or what we do as a band, it would be that everything that we do is just a representation of who are as people, what we stand for and what we believe in.”

Don’t miss out on Nyles Robakiewicz and the band perform their winning songs today, April 24, at Larry Joe Taylor’s Texas Music Festival on the Allsup’s Stage at 12:30 p.m.