Dolly Shine returns to the stage for four shows 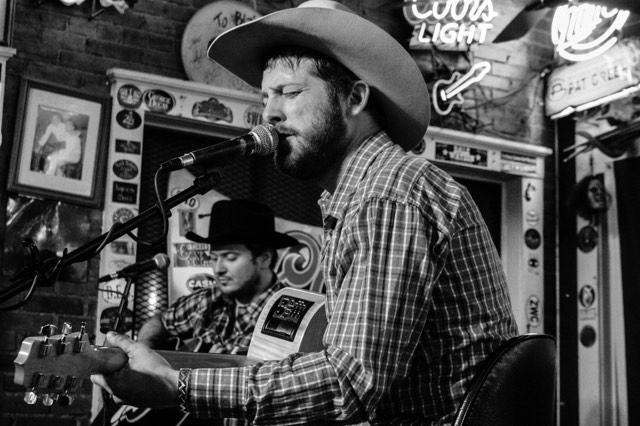 Zach McGinn performing for a crowd.

It was 2000 in a small town south of Fort Worth, Texas named Stephenville, Texas when a new band was born. That band would later release two Extended Plays (EP), three full length albums, sell out shows, change band members, go through a breakup in 2016 and now 19 years later, they are putting on a reunion tour. Dolly Shine is band that is known throughout the Texas music listeners and a band that everyone loves. Dolly Shine sold out shows left and right and their fan base continued to grow over the years. However, Dolly Shine faced troubles with band members coming and going, poor management and the band growing up. Over the years, Dolly Shine was a family and continues to be a family.

Dolly Shine is returning to the stage for four shows at their favorite spots. Three of the original five members will be hitting the stage starting May 3 at Blue Light in Lubbock, Texas. Jerrod Flusche the lead guitar player, Zack McGinn the lead singer and Johnny Goodson their drummer are ready to be back on stage with each other playing for their fans.

The band member sall met while touring with other bands before they joined together to form Dolly Shine and the rest is history.

“We all met through touring and being on the road with bands. The Texas music scene is like a big family. Everybody knows everybody,” McGinn said.

“I met Zack and the guys that comprised Dolly Shine circa 2010. It’s been a while so it’s hard to know exactly when,” Goodson said. “The band I was in at the time and Dolly Shine played the same venues across Texas and especially Stephenville. So naturally we were always attending the same social events at the end of our nights. Later on I needed change in group and environment. Dolly Shine was in need of a drummer due to theirs constantly in and out of jail. We agreed for me to do some fill in shows while they found a secure drummer. I was hired the second we stepped off stage after my first gig with them.”

The band slowly started forming into a family and people that the members could rely on. They faced challenges like any band but they learned and grew. As the years went on things tended to get worse but they stuck together through the hard times.

“Dolly Shine was my life and taught me more than I can explain,” Flusche said.

“We had our ups and downs just like every band. When you spend that much time with a group of guys, you really become more like family,” McGinn said. “You’re going to have some great times and you’re going to fight a little bit haha. All in all, my time on the road with the boys was something that I cherish and I wouldn’t trade it for anything. Some of my best memories were spent with this band.”

Leading up to the break up things got worse and out of control, leading to a tense band, a rough situation for Dolly Shine. However, it never impacted their playing, they left it all off the stage.

“Things were tense leading up to the eventual disintegration of the band. But have in mind, times were as they always are for a young starting band,” Goodson said. “We didn’t have investors, no management worth a damn, no booking agents would represent us, a crappy van that always had something ailing it. Tension can be very thick in the air when there is no security in what you’re doing. I’m impressed that we didn’t kill each other even after the crap we were dealing with. ‘It was the best of times, it was the worst of times’.  But, even though off stage was constant madness. On stage was always electric and made every problem we had go away for 90 minutes.”

Fast forward to 2016 when Dolly Shine announced their break up. The break up was not because of their tension and problems with their management, it was time to take the break.

“The breakup wasn’t for bad reasons like some would like to think,” McGinn said. “Being home with family was a big factor. Music wasn’t just something I did. It was who I was and a big part of who I still am. But at the end of the day, family comes first.”

“I was the first member to quit in 2016. Getting older and finally meeting someone that I was willing to settle down with changed my whole perspective,” Goodson said. “Drinking and partying was already behind me, so living on the road, the late nights, booze and drugs environment was getting old. I decided to go back to school and get ‘normal’ job. Once I had a start date at school, I gave Zack my notice. Shortly after I left, Ben Hussey was expecting children so he naturally retired temporarily from the road.”

“Sometimes you have to take care of family and yourself and put projects on hold. Breakup sounds definitive, I think a pause was more in order,” Flusche said.

For two years the band were on paused and enjoying their time at home with their families and growing up outside the band. However, that time is over for just four nights; the men of Dolly Shine are ready to go back out on that stage and enjoy playing live again.

“There’s something about playing live that is explainable. It’s different for every band and sometimes you get an itch to relive that feeling.” Flusche said.

“Jerrod and I have always stayed in contact. I will say he is a best friend and definitely the rock I leaned on thru the Dolly Shine madness,” Goodson said. “He notified me somewhere late last year that Zack wanted to do a reunion run of shows. I told Jerrod the only way I was doing this reunion is if he agreed to it. He was in so was I. Zack will have the answer of what brought about this reunion.”

The reunion was a decision all the guys agreed on and wanted to do. It was talked about and then grew from there.

“It was a pretty unanimous decision. A handful of us had been talking about the idea of a reunion for a while and decided it was time,” McGinn said.

As the reunion shows are coming up the three members are enjoying their time back and getting ready for the shows.

“Zack, Johnny and I are the only members from the last lineup that could come along but we are super stoked to have some amazing musicians coming out with us,” Flusche said.

“It’s been really cool. We are gearing up to get together and I’m looking forward to having the gang all back in one place,” McGinn said. “Jerrod and I recently got to play an acoustic show together and it was like we picked up where we left off. These shows are going to be a blast.”

With their band put on hold for a little over two years, the three guys missed each other and playing their friends. They looked back to what their favorite times were and what they missed.

“I missed hanging out with Jerrod during this break. He is practically my brother and we always made each other’s lives easier on the road,” Goodson said.

“For me, it was the songs and the way it felt playing them with this group of guys,” McGinn said. “There was a certain energy that came out on stage. You could just feel it. And the crowds. The way they reacted to songs that we poured our heart and soul into.”

Four nights, four shows and a reunion that you cannot miss. The three guys originally had selected only three shows, Blue Light in Lubbock, Blaine’s Pub in San Angelo and Twisted J in Stephenville. They are looking forward to being back at their common grounds and performing in front of their biggest fans once again.

“We chose these locations because they were some of our favorites to play while we were touring. They’re our old stomping grounds, it’s kind of like going back home,” McGinn said. “I’m looking forward to getting back on stage and playing music with my buddies. And seeing a lot of old friends from the road.”

“Our old stomping grounds were a no brainier. We are basically just showing up at our old homes around the state,” Flusche said.

“The locations of these shows will be nice to revisit and possibly see some old friends that I haven’t seen in a few years,” Goodson said.

Recently Dolly Shine added Billy Bob’s in Fort Worth to their reunion making it the four shows. The three guys are excited to add the extra show and being back at Billy Bob’s.

Fort Worth has always been one of our favorites,” McGinn said. “When Billy Bob’s offered us a show, it was a no brainier. When the world’s largest honky-tonk asks you to come play, you say you bet!”

But why only four shows? Dolly Shine is family and everyone knows how family can be. Keeping it as a short and sweet reunion, just makes those four shows more special.

“This is a family reunion, you know how family is when you’re around each other too long,” Flusche said.

“We wanted these shows to be something special. Although we would have loved to do 15 or 20, keeping it to a select few felt like the way to do that,” McGinn said.

With the first shows happening this weekend the guys are getting ready and pumped. But fans are left to wonder if they are cooking up other shows or maybe a full comeback with new albums and tours. Their lips are sealed but there is sly hinting at a possibility of more to come.

“Just the four shows, but you never know,” McGinn said. “Keep your eyes peeled and your ears open!”

Don’t miss out on catching one or all of Dolly Shine’s shows this month. The first show is this Friday May 3 at The Blue Light in Lubbock, Billy Bob’s Texas in Fort Worth on Saturday May 4, next Friday May 11 in San Angelo at Blaine’s Pub and last but not least Saturday May 18 at Twisted J in Stephenville. The guys look forward to seeing everyone again and playing their old tunes.

“To our fans, thank you for all the years of amazing support and I surely hope to see you guys out on the road at one of these family reunion shows!” McGinn said.

“We are super excited and thankful to be able to do these shows. We are incredibly humbled that anyone even wants to show up, not to mention do what they have. Thank y’all for everything,” Flusche said.