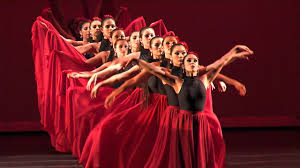 The UTRGV Ballet Folklórico is a thirty-two member organization comprised of students who are pursing degrees in a variety of disciplines.

In celebration of Hispanic Heritage month, the dance troupe Ballet Folklórico will perform at Tarleton State University on Monday, Sept. 16, 2019 in the Clyde H. Wells Fine Arts Center. The show will begin at 6 p.m. but doors open at 5:30 p.m.. Tickets are free but are first come first serve. Anyone that would like to attend is welcome to come in until the theater is at capacity.

The Ballet Folklórico is a performance group from the University of Texas Rio Grande Valley. According to their website the troupe consists of 32 members of different backgrounds and chosen areas of study. The dance troupe has competed at the state and national levels as well as traveled internationally to perform. They were even included in the Texas Commission on the Arts Touring Roster Program, one of only 100 Texas artists/groups. This production will differ from the show put on by a different troupe of the same name that performed at Tarleton in 2018.

Tiburcio Lince from the Office of Diversity, Inclusion & International Programs explained that typical performances of this nature are titled. However, the troupe names each season of their performances rather than each singular show. The piece they put on for Tarleton students is intended to be educational. As such, they “will incorporate a blend of pieces to highlight the rich variety in regional dances in the Mexican dance folklore.” because of this, their performance is untitled.

Tarleton chose to invite the Ballet Folklórico of UTRGV to perform during Hispanic Heritage month because doing so allows “institutions to highlight and celebrate their contributions and achievements,” said Lince. “When we think of ‘heritage’ often times we think of civil right movements, we think of particular individual heroes like Cesar Chavez, or Dolores Huerta. But heritage also includes contributions to science, fine arts, among many other realms.”

Lince furthered this explanation of the significance of the show by stating that “in this case, Ballet Folklórico celebrates Hispanic heritage in the way it highlights and elevates the diverse variety of regional Mexican dances. Ballet Folklórico reclaims the space of prestige in the ambit of dance as an art form or craft and displays in the format of a two-hour show for us to enjoy.”

This performance will highlight the Mexican and Mexican-American experiences. This piece was chosen specifically because Texas borders Mexico and according to Lince “the vast majority of our students are of Mexican or Mexican-American descent.”

But the Ballet Folklórico’s performance is not the only event planned to help Tarleton students celebrate Hispanic Heritage month. The Office of Diversity, Inclusion & International Programs will host five more events during September. Including: The Dolores Huerta Documentary screening, LGBTQ 101, Bridge Builder: Afro-Lantix ID, Ally I training and the Fall LGBTQ Retreat.

This performance was made possible by the Lance Zimmerman Department of Student Involvement, Traditions, Spirit, & Family Relations, the Office of Diversity, Inclusion & International Programs, and Residential Life.