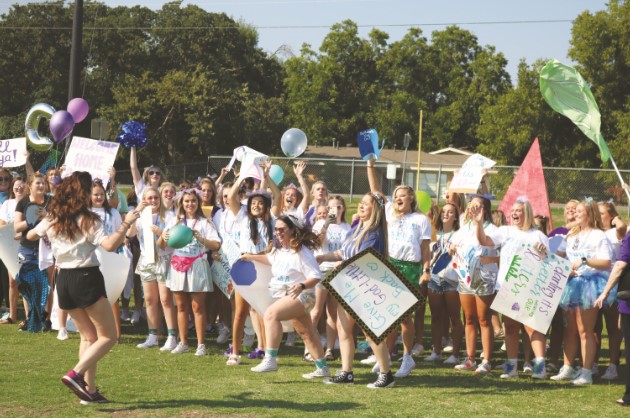 Alicia Blomquist welcomes home her little as Panhellinic recruitment comes to an end.

Sororities have been a part of universities across the United States for many years. Here at Tarleton State University, sororities have been around since 1984. A sorority is a group of women that share common goals, aspirations, and values. In total there are eight overall sororities here on campus which are; Alpha Gamma Delta, Alpha Omicron Pi, Delta Phi Epsilon, Delta Zeta, Phi Mu, Kappa Delta Chi, Sigma Alpha, and Zeta Phi Beta.
Tarleton has a group named Panhellenic, which is specifically for sororities. This council is what governs five out of the eight sororities here on campus. The National Panhellenic Conference (NPC), is the support for the advancement and success of the sorority experience.
Recruitment took place from Aug. 28 through Sept. 3. The recruitment process is composed of three steps; first, the girl must choose between the two different councils here at Tarleton. Second, she must sign up with whichever council she would like and pay the fee, and lastly, she must take part in recruitment week.
After recruitment week, there were officially 224 new members all together in the sororities on campus. “The recruitment process was well organized and I saw that it was really effective at placing you where you are meant to be.” Rylie Brown, new member of Delta Zeta states, “I know I have found my place on campus and I know I am part of a permanent family that I can count on for the rest of my life.”
In an over the phone conversation with Stephanie Chambers, Assistant Director of Fraternity and Sorority Life, she stated, “the focus that we have this year for the women is for them to really take a look at what their values and their chapter’s values are and always stay true to them.”
Values are the prime focus of these sororities and can range anywhere from service to research. Maddey Ashby, 2 year member of Phi Mu, she feels that the values held among women in her sorority are important because they “connect all of the Phi Mu women across the U.S. so it is imperative to stay true to our values.”
Riley said, “As a new member, I want to contribute as much as I can to my chapter’s philanthropy and sisterhood and to always strive to make my sister’s day better and help elevate our chapter as a whole.”
The goal for this year’s sorority women, from Stephanie Chambers is that, “they continue their value-based concepts, that they may find their place on campus, and that everyone has a positive experience.” Joining a sorority has its benefits; it offers many networking opportunities, a chance to grow as a person, and become a part of a family where everyone cares for one another.
In the coming year, Alpha Gamma Delta and Theta Phi Beta will both be celebrating their 35 anniversary here at Tarleton!