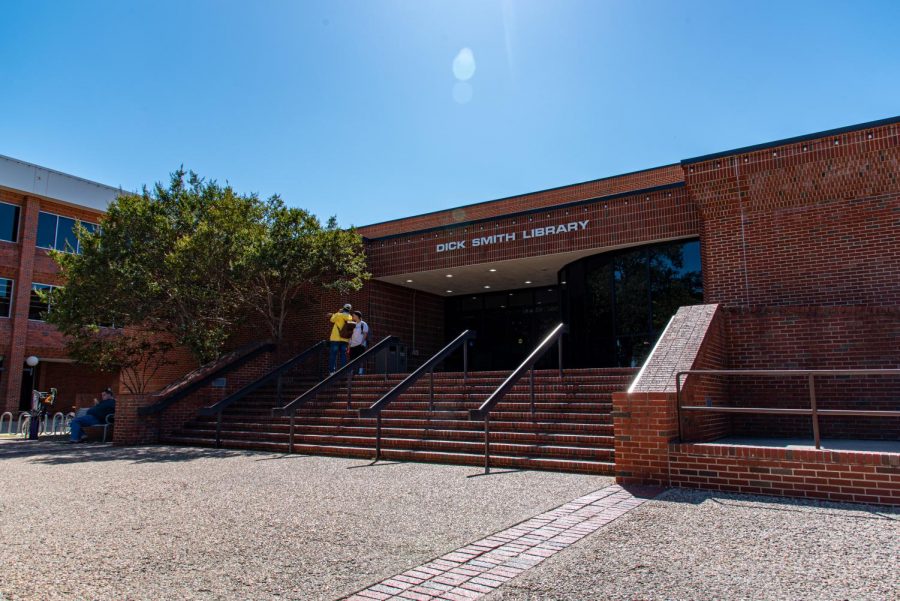 To Kill a Mockingbird. Lord of the Flies. The Great Gatsby. All of these books are what students read in high school; and all of these books are now banned. Starting in the 1980s, literature of all kinds including books, children’s books and poetry were being banned from school curriculum and libraries. The reasons people

had for banning a book was for profanity, sexual content, antifamily values, violence and religion.

The week of Sept. 22 was Banned Books Week, a national event created to spread awareness of censorship and to celebrate the right to read. On Sept. 26, the Dick Smith Library hosted a banned books reading; where students and faculty could sign up to read a passage from their favorite banned book. Dr. Christy Tabors, who is the manager of research and learning as well as library reference and information services, oversaw the banned books reading. “[This event] is important because it’s important to have the discussion on the freedom to read. Some countries may not have that freedom and we do. We need to educate the public that books have been banned in this country and we should prevent that from happening,” says Tabors. For students to bring awareness to book banning, Tabors suggests having an open conversation about censorship and what it means to have the freedom to read. “Students might talk about why a certain book is banned. Especially in this society today, there is lots of divisiveness,” says Tabors. Tabors is an open advocate for the freedom to read, and mentioned her favorite banned book is Catcher in the Rye by J.D. Salinger because it is a coming of age story.

While at the banned books reading, a few students and staff shared which banned book they chose and why. One student, who said it would be more impactful if he remained anonymous, chose The Lord of the Rings by J.R.R Tolkien. “It is seen as a literary classic. It astounds me that is was once banned but is now a classic,” says the student. The Lord of the Rings was banned for satanic themes because of its magical elements. Another student, Emily Haught, chose Leda and the Swan by William Butler Yeats. “I don’t understand why people feel the need to censor literature. It’s cultural education, and banning it is basically telling students they don’t deserve this education,” says Haught. Leda and the Swan was banned for sexual themes such as bestiality and rape. Dr. Malcolm Cross, a professor of Political Science at Tarleton, chose The Gulag Archipelago by Aleksandr Solzhenitsyn. “It is one of the most political and literary works of the 21st century. It helped bring down the Soviet Union,” says Cross. The Gulag Archipelago was banned in the Soviet Union after hitting the West in 1973 because of its criticism of communistic ideals. Another student, who decided to remain anonymous as well, chose Fahrenheit 451 by Ray Bradbury. “It is one of the most ironic books to be banned because it is exactly what Ray Bradbury was saying would happen in the future,” says the student. Fahrenheit 451 is about the banning and burning of books in a dystopian future, and was banned because it included the burning of Bibles.

Schools and libraries nationwide are constantly raising awareness for censorship and the freedom to read. The Dick Smith Library hosts a banned books reading every year during Banned Books Week.