Men’s Basketball seniors ready to go out with a bang 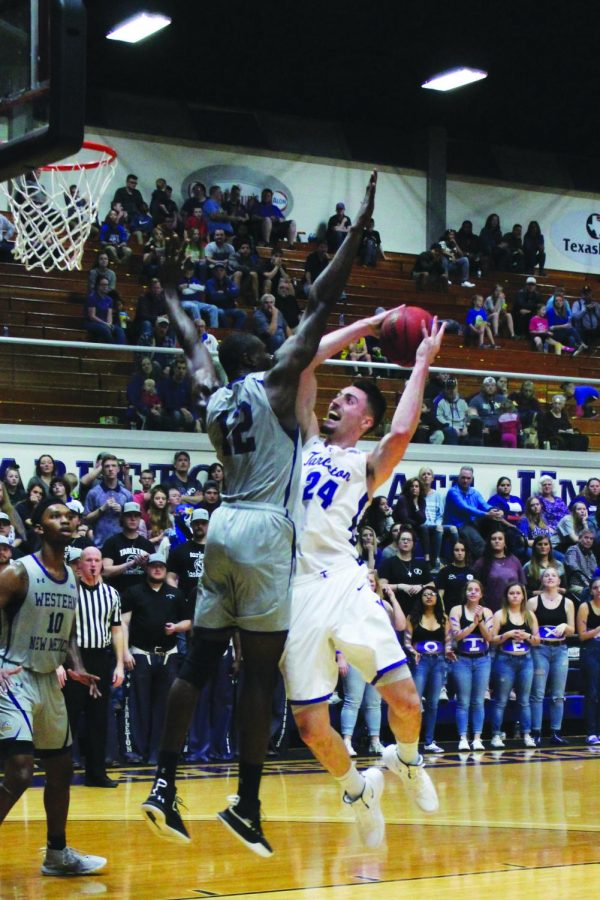 Senior forward, Jesse Hill, going for a shot during his hot night against Western New Mexico University on January 26. Hill had 19 points on the night and eight rebounds for the team-high.

Gritty, powerful and passionate are words that seniors Randall Broddie, Josh Hawley and Jaraan Lands would use to describe this year’s Tarleton State University’s men’s basketball team. After going 21-10 last season the team is ready to get back on the court and do what they know. Hawley, Broddie and Lands are ready to lead the team to wins and back to the NCAA tournament. After losing a few starters from last season they are ready to build back the chemistry that the team had. “When you bring in new guys you got to have more patience with them,” Broddie said. “The seniors have been doing a good job getting the new guys comfortable with the new offense.” “Losing starters is always hard,” Lands said. “It is always the chemistry that you lose and try and build in the preseason.” Getting the team ready and pumped up to reach their goals, Coach Chris
Reisman is just working on chemistry and getting the team as one. “Right now, my job is to figure out the chemistry and who to play with who,” Reisman said. The team has improved from last year with new guys, new plays and a new energy. “Defensively we’ve improved and now we have a team that can be a deeper scoring team,” Reisman said. “We have improved tremendously we have a lot of new guys that bring more threats to the offense,” Broddie said. Reisman and the seniors are ready for the challenges that this season will bring. “We have an amazingly tough schedule and we go on the road more this season so there is going to be some challenges in that regard,” Reisman said. “Also, seeing different styles that we are not use to, different coaches and new teams.”Reisman is hoping for the team to realize their potential and come March that they are playing their best game and get a chance to play in the NCAA tournament. The team wants to be more aggressive on defense and to be collectively together and realize their potential. This season the team has 16 home games and the seniors are wanting everyone to come out and bleed purple. “We always need fan support,” Lands said. “Without the fans its dead, we need the energy. Everybody needs energy to play and ourselves as a team we feed off you guy’s energy so please come out were going to put on a show for you guys.” “We have high energy, we have a great team this year,” Broddie said. “We have a couple of highflyers, we have a high paced, fast team. You will see dunks and a lot of threes.” “You need to come out because I won’t be doing the same dunk twice in a game,” Hawley said. “If you see me catching a two hand, I will be catching a one hand and if I catch
a one hand, I will be 360 bobbing it with a windmill coming off that.” Reisman says the team is strong and there are many players that could shine this season and that we should look out for. “Josh Hawley he was first team allleague defensive player of the year last year and Randall Broddie finished the year really strong last year. He was our second leader in returning scores, so those are guys that are going to have big roles and I hope to do well,” Reisman said. “Clashon Gaffney and Jaraan Lands are both returning bigs for me. They both bring different styles and different talents to the team and can have big seasons. Out of the new guys, Devin Bethely has done a really good job and has picked up the system up quickly and Zach Naylor who is a 6’8” guard who can really play multiple positions. Reisman also has high hopes for two freshmen, Isaiah Range and Jovontae Hopkins and junior, Josh Williams that they recruited from Houston. The first home game is Thursday Nov. 14 at 7:30 p.m. come out and bring your high energy, your spirit and don’t forget to bleed purple.