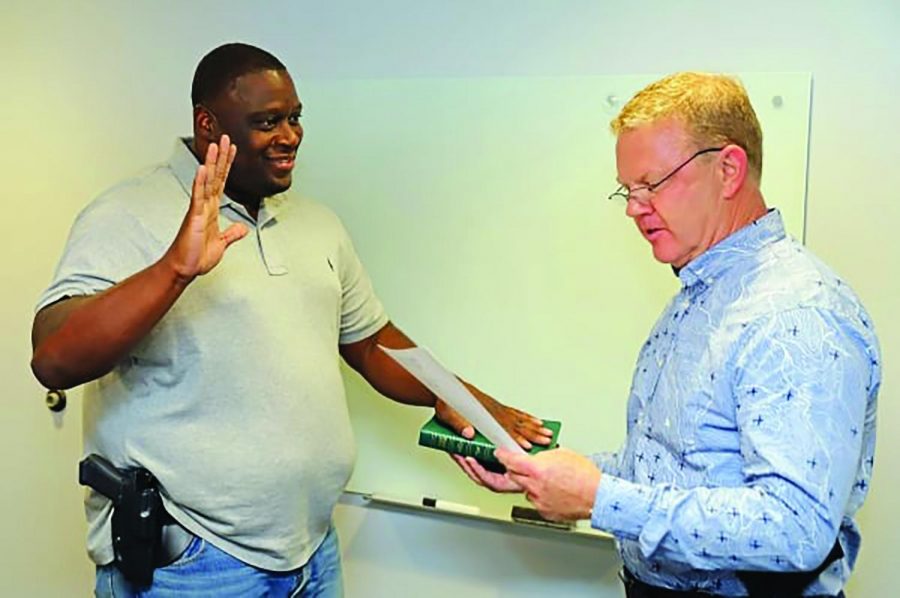 Officer Burney being sworn in by Police Chief Matt Welch.

Officer Brandon Burney, a Tarleton Alum and former basketball player, has returned to work in the Tarleton Police Department. He graduated in 2015 with a degree in criminal justice administration and holds the Tarleton record for most points scored during a single basketball game in a 2001 game against Abilene Christian University. Burney started working on campus recently and has had a chance to work both the day and night shifts. He describes the day shift as a time where he gets to work with more faculty members and the night shift as a time to work with students. His favorite part of working on campus is making sure everyone is safe and finding the best solution to any problem that may arise. “Working at Tarleton, everybody is like a family. We are all brothers and sisters. We learn from each other and we have no bias. Nobody is black or white or any color. We are all blue. The supervision is wonderful and I couldn’t ask to be in a better place,” Burney said.
Burney spoke of wanting to come back and help guide current athletes at his alma mater in the right direction in life. He also wishes to be a good role model in the community. “Don’t give up on your dreams but education is the most important along with hard work and dedication,” Burney said. Burney stressed having had a competitive nature when it came to playing basketball and said that playing for Tarleton taught him to talk to people and that he is always learning. Many of the same attributes apply to having a career in law enforcement. Burney is in a particular position as a former Tarleton athlete who is present on campus during the transition from division two to division one. “Going D1 is a great opportunity that has been a long time coming. It is time to take it to the next level,” said Burney. This transition will call for an expansion of the Tarleton athletics department that will increase both staff and student involvement. Burney mentioned that he would like to get involved with recruiting
for the basketball team if the opportunity arose. He said he would be interested in the chance to coach for a children’s basketball team or to become a coach at a higher level but that it would have to balance well with his career as a law enforcement officer. Before working at Tarleton, Burney worked at Cedar Valley Community College in Dallas and described the atmosphere as being very similar to Tarleton when it comes to dealing
with faculty and students. However, he started his career 8 years ago as a jailer. When he wanted to make the push to make a difference for his family it caused him to pursue law enforcement. He described being a jailer as being similar to babysitting inmates. “You have to have common sense,” Burney said. “I believe you should treat others how you want to be treated”