Texans split the series with UAFS with a win on Sunday 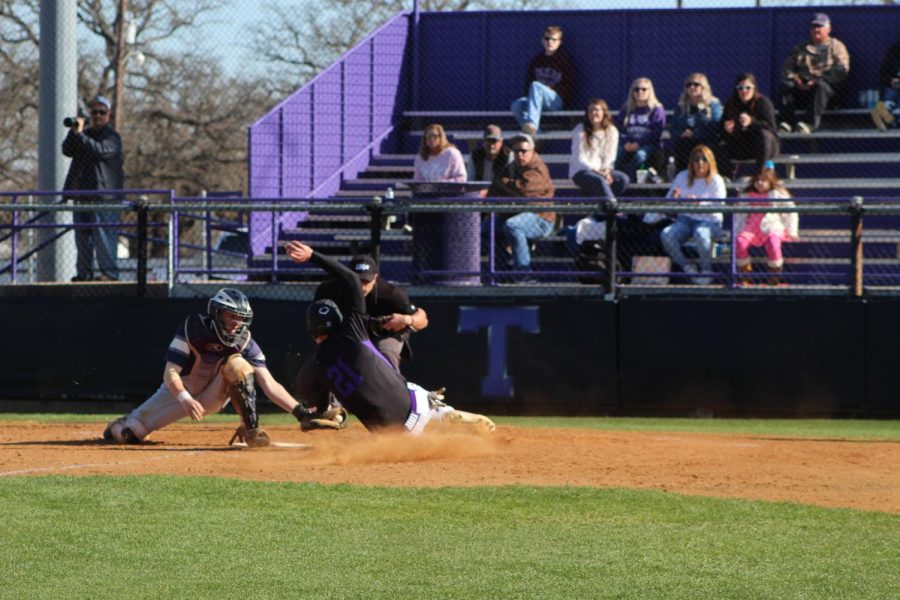 Blake Burns slides into home base in Tarleton’s game against University of Arkansas Fort Smith on Feb. 14, 2020.

After six scoreless innings, the Texans offense busted open and were able to bring home six runs by the help of three home runs. One of those was an in the park home run by first baseman Blake Burns.

The first six innings were scoreless for both teams, due to the great pitching on both sides. With redshirt freshman Sid Payne getting the start and pitching two clean innings going six up and six down before freshman Garrett Leggitt came in and relieved him.

Leggitt pitched five innings and only giving up four hits and one run while striking out four players from UAFS. The Texans defense backed up Leggitt with three double plays and a third out in the seventh inning by Burns from a ground ball that left a player stranded only allowing UAFS to score their only run for the game.

To start the Texans fire inning, Jordan Parker took his first pitch and sent over right fields fence and tied up the score. To take the lead in RBI by Tyler Fowler, that was followed by the securing three run home run to right center by Zach Messa. The Texans run of the inning and the game was by in the park home run to the center by Burns.

Ty Jones came into pitch in the eighth where he struck out one batter and didn’t allow any runs.

To close out the game, Texans pitcher Zane Badmaev sent UAFS straight the bus with a three up three down ninth inning.

The Texans finished the game with eight hits, no errors, eight strike outs and the win to split the weekend series with UAFS.

The next series is on the road to Eastern New Mexico with the first game of four being on Friday, Feb. 21