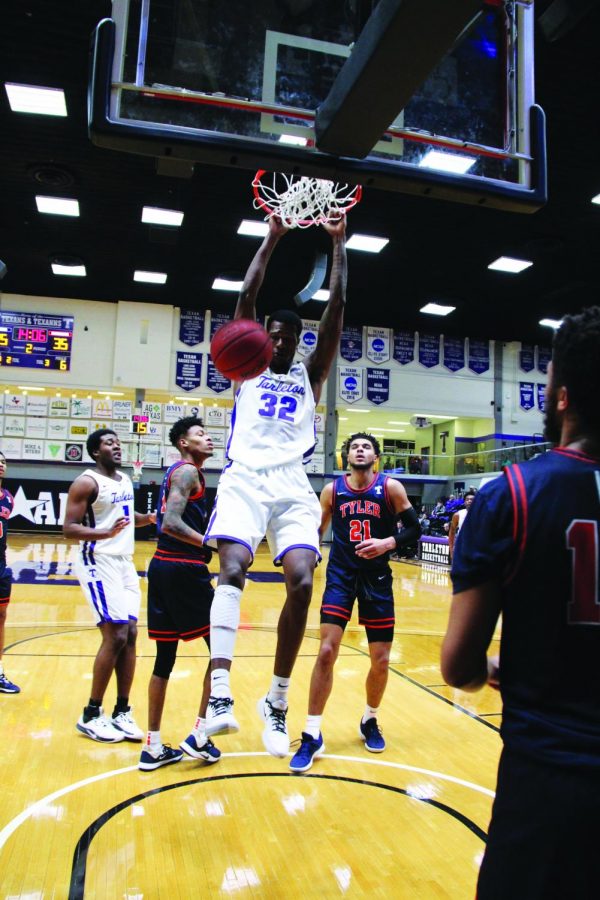 State Farm Insurance is sponsoring a Dark Horse Dunker Fan Vote competition between the top NCAA Men’s Basketball under-the-radar dunkers from across the nation. Josh Hawley, a senior forward, is representing Tarleton as one of the 16 finalists competing for the title to receive the final roster spot in the State Farm College Slam Dunk Championship.

Winning this fan vote competition would provide beneficial ESPN coverage during the Final Four Basketball Championship for Tarleton Athletics as we transition to NCAA Division I.

In the opening round of the competition, Hawley competed against Isaiah Crawley of the Division I school, Georgia Southern. Hawley clenched the first round victory leading Crawley by 18 percentage points. He advanced to round two of the competition scoring 59 percent to Crawley’s 41 percent.

In round two, Hawley will face Dakota Bennington from Eureka College, Emmanuel Egbuta from Tennessee State, and Danyon Hempy from the College of Wooster.

Voters can visit http://www. darkhorsedunker.com/ and vote one time per device each calendar day during the voting period. Each voter can use a computer, cell phone, tablet, etc. once daily to cast votes for Hawley in hopes of helping him advance to round three of the Dark Horse Dunker competition.

Competitors in the Dark Horse Dunker Championship must be current college students in good standing, who are on track to graduate at the end of the 2019-2020 academic school year or otherwise have completed their college basketball career or eligibility.

A committee of independent judges determined 16 finalists from all possible participants. The finalists were selected based upon their demonstrated skill sets, statistics throughout their college career, individual character, and demonstrated leadership qualities.

As a campus we should unite to cast votes for Hawley, he did the work, had the successes needed to receive the nomination among a well-qualified pool of participants. Therefore, we should support him in trying to clench the victory and provide well needed coverage for Tarleton Athletics as we make the transition to Division I.