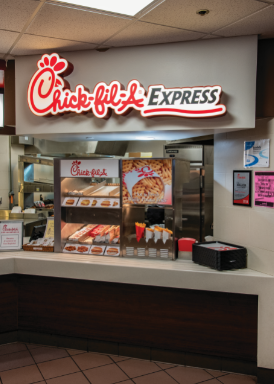 Chick-fil-A recently was thought to be changing their breakfast hours to 11 a.m. however this was only rumors, they will be staying with their normal end time of 10:30 a.m.

Recently, new information has been traveling around about the campus regarding Chick-Fil-A extending its breakfast hours from ending at 10:30 a.m. to ending at 11 a.m. However these rumors are false, according to Sodexo General Manager, Tanner Smith.

“Every morning we start by making breakfast and then once the food item is made it is moved to the grab and go tray where the food stays until it is picked up by a student.

“We continue to fill the grab and go tray as food is taken through out the breakfast hours. Once breakfast concludes at 10 a.m., the whole kitchen is shifted to making lunch. From there no more breakfast items can be made because of the differences between the breakfast and lunch choices.

“Because of this it is not possible at this time to extend the breakfast hours” Smith said.

Smith did note that any leftover breakfast was stored and could be requested by students until the stock ran out or until 11 a.m. At 11 a.m., what ever was left would have to be thrown out since it was no longer edible due to food safety guidelines.

According to one of Chick-Fil-A’s official websites, Thechickenwire. com, all of Chick-Fil-A’s breakfast items, especially the famous chicken biscuit, are handmade, and they take time and special preparation.

This is one of the reasons that most Chick-Fil-A’s, including Tarleton’s, run their breakfast hours in uniform with each other from opening to 10:30 a.m.

Another possible reason for the inability to change the hours could be due to the fact that breakfast and lunch can not be made at the same time with the same equipment due to food safety guidelines.

Whatever the reason, Tarleton’s campus Chick-Fil-A breakfast hours will not be changing any time soon.