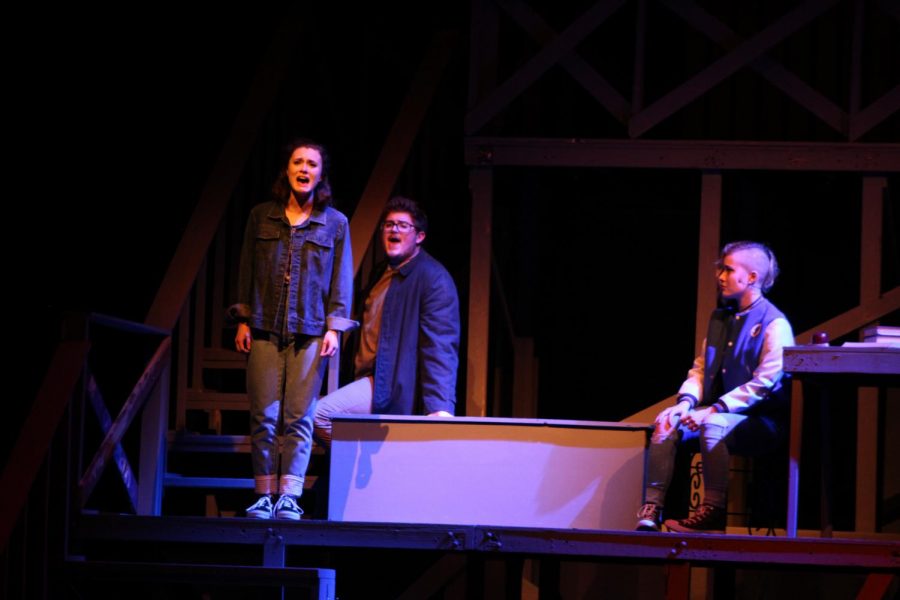 Rebecca Franko, Cameron Bishop and Jenna Townsend in “Next to Normal.”

On Feb. 19, 2020 Tarleton’s Theatre department put on an impressive opening night performance of the musical, “Next to Normal” by Brian Yorkey and Tom Kitt. The performance was directed by Associate Professor of Theatre, Prudence Jones.

According to allamericanspeakers. com, Yorkey graduated from Columbia University where he served as the artistic director of the Varsity Show. He also is an alumnus of the BMI Lehman Engel Musical Theater Workshop. Yorkey seeks to explore controversial and dark topics, such as mental health, in his work. He is best known for his work on the Netflix show, “13 Reasons Why” and the Broadway musical, “Next to Normal.”

The cast did a fantastic job of working together. Every character played off of each other very well, with each actor giving 110 percent during the whole performance.

Vocals were very pleasant to listen to, however technical issues from the microphones made it hard to enjoy the performance especially when there was a high amount of peaking and static coming from the actor’s mics. Despite the technical issues, the actors did an excellent job of keeping in character and moving the play along whenever the issues would occur.

One problem came from Dr. Fine/ Dr. Madden, as he was noticeably quiet even with the microphone. Another problem came from Dan, whose movements seemed stiff in the first act, however this stiffness went away during the second act.

The standout performances came from Bishop and Townsend who both embodied their characters and did a wonderful job supporting the rest of the cast. Every scene that these two were in was full of wonderful and memorable moments.

The best scene was the “There’s a World” scene, which with the combination of the crimson red lighting and the amazing performance from the actors, created a mysterious and dark scene where you get this feeling in the back of your mind that you know where the play is going next. However you don’t want it to be true that Diana attempts to kill herself. The whole scene gives you this chill in the back of your mind, with the lights casting so many different shadows that you almost feel like you are in the darkest places in Diana’s mind. The use of the side stage door and the red light coming from said door, gave this scene a cherry on top, making it the most stand out scene of the show.

The set was an excellent backdrop to the play. Designed by Carol Stavish, it served as the perfect mood setter as you first walked into the auditorium. Every placement of the onstage props from the toilet, to the center stage table was excellent and very pleasing to the eye.

The actors used the set perfectly. They moved around it as if it was truly their own home that they had lived in all their lives. Even the band and conductor had a perfect placement on the upstairs portion for the set, getting their own onstage nook that fit the set nicely.

The standout part of the set was the “Roof,” which severed as this very interesting and eye-catching piece of scenery that topped off the already beautifully dark set.

The costumes, which were designed by Rylie Fisher, fit the play perfectly as well. All of the characters costumes’ looked like they were perfect fits for the actors, except for Dan’s costume, whose suit looked a little big on him at times. The stand out costumes came at the end of the play from Natalie and Henry, whose dance attire was very fitting for the characters given the context of the show, and gave us a nice contrast to what the characters had been wearing throughout the rest of the play.

Marcos Garcia designed the sound, which complemented the play nicely. However there were a lot of technical issues that made the play hard to enjoy at times. The most memorable moment from the sound was the opening house music which along with the set, gave us a nice teaser for the show.

The band did a wonderful job, all the music was wonderful done and sounded very pleasing. The band was made up by Rachel How, Jordan Sunderman, Ethan Caldwell, Noah Reily, Fabian Weirich, Kurt Johnson, Colby Badgley, and was conducted by David Robinson. The band’s highlight performance came during from “Who’s Crazy/ My Psychopharmacologist and I”, which was perfectly performed by the Band.

Lighting was the most memorable part of the performance. The many onstage and offstage lights were used to great effect in perfectly setting the mood of each scene. The gobos used were nice touch to the scenes in which they appeared. The standout moment for lighting was during performance of “There’s a World,” where the use of the offstage lights as they bled in from the onstage door was nicely executed.

Overall, the play was a nice experience. The cast had wonderful chemistry and they did a nice job of acting very natural in their movements as they danced and moved across the set. The costumes matched the characters nicely and the set gave off a haunting but interesting feeling.

The sound crew did a nice job, however there were many technical issues during opening night. The lighting crew did a fantastic job of enhancing each scene. The band did a wonderful job performing each piece and perfectly matching the vocals. All those involved should give themselves a pat in the back for a job well done.