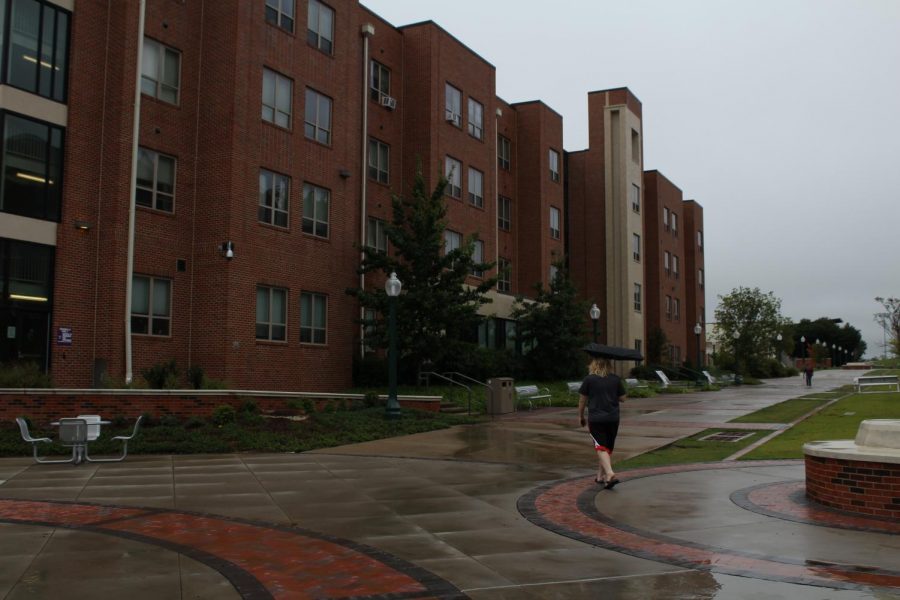 A student walks past Honors Hall while trying to stay dry during the rain we experienced Sept. 1.

Hurricane Laura made landfall on the Texas-Louisiana border on Thursday, Aug. 26. While the hurricane only devastated the coast, everywhere from south to north Texas was affected by heavy rainfall and severe thunderstorms.

On Tuesday, Sept. 1, Erath county put out a flash flood warning, a severe thunderstorm warning and a tornado warning. Tarleton experienced torrential rain along with unrelenting thunderstorms. These thunderstorms affected the Honors Hall in particular.

Since there had been a tornado warning issued on top of the flash flood and thunderstorm warning, my Residential Leader advised us to head downstairs or stay in our rooms away from windows. My roommate and I decided to stay in our room since it was already late.

While getting ready for bed, lightning struck where what seemed to be right outside our window. The light from the lightning and sound of the thunder terrified us.

Moments later, our power completely shut off. The power came back on within a few minutes and we thought everything was fine. Another few minutes go by and then the fire alarm goes off. Due to safety protocols, everyone in the building must evacuate when the fire alarm goes off. Our RL knocks on our door and tells us to take the stairs outside. The next thing I know, we were outside, in my pajamas, barefoot and in the rain. Thunderstorms were still active, tornado warning were still in effect.

However, considering we were walking outside in a severe thunderstorm during a tornado warning to escape a potential fire in our residence hall, proper social distancing was the least of our worries. As we were waiting instruction in the Science Building an RL informed us that lightning had struck one of the generators. The generator it struck was the one that controlled the fire alarms. When the lightning struck, it caused the power to go out and triggered the fire alarms. There was no fire. We walked out in the thunderstorm for a blown generator. Because the generator was blown, the fire alarms continued to be triggered. For a few residents, the fire alarm would periodically beep all night and even throughout the next day.

The Honors Hall got maintenance to come and fix all the fire alarms discharging, and the building went back to normal… except for the broken elevator.