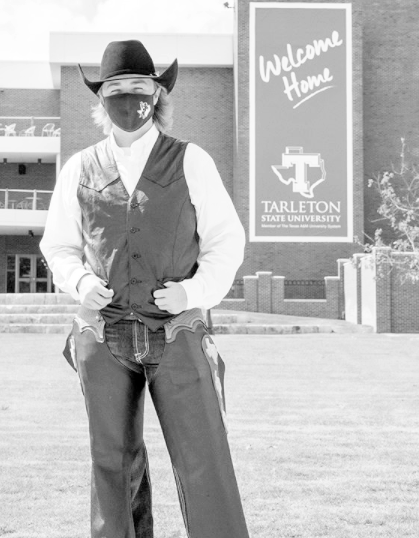 The Texan Rider is recognized as Tarleton State University’s mascot. We see it all over the school, whether it be on t-shirts, cups, hats, flags or socks. On campus or wherever we may go the Texan Rider is always around. The name “Texans” was chosen as the athletic namesake in the year 1961. A few years later it was decided that the Texan Rider would be the school’s mascot.

One of the most recognized traditions was when the Texan Rider would ride a horse down the football field at games. Although this tradition is no longer around, there is still much more that he or she does.

The Texan Rider brings the Tarleton spirit to everyone on campus, during events and everywhere he or she may go, whether it be at community events or at our outreach campuses, the Texan Rider is always there to share that interaction and joy.

As we all know, COVID-19 has changed several things in our lives during this past year. One of the changes for Tarleton was the Texan Rider tryouts. Previously they would have been held in person, however this year, candidates were to create a tryout video of a skit or a routine. In this video, he or she who was trying out was to be dressed in what they felt represented a Texan Rider. Not only was the physical look important, but also the candidate must have been able to show their own creativity as well as enthusiasm in order to stand out.

In an over the phone interview, with Tarleton’s head cheer coach, Blaine Hamilton, I asked her what exactly they were looking for in a Texan Rider candidate.

“We look for someone who is outgoing, not shy, scared or timid. This person must be excited while showing love for Tarleton,” said Hamilton. “We want to see this person step outside the box while representing the university in a positive way.”

After two years of being Tarleton’s Texan Rider, Elijah Perry Imbong’s title was passed down to Walker Kirk. When asked about the new Texan Rider, Imbong said that he feels confident in Kirk and that the position is in good hands.

Being the Texan Rider is not at all for the weak, as it is important for this person to have a wide range of skills and a lot of talent, when it comes to bringing spirit to thousands of people. This puts a bit of pressure on the Texan Rider to be able to engage will the various different people they will come in contact with.

“[Kirk] looked and felt like he really wanted to be a part of it. It seemed very natural for him to be in the element, and he just really hit the nail on the head,” Hamilton said. “He really is a solid guy. He is such a positive person who is easily approachable.”

These are all qualities that have made Kirk the perfect candidate.

Kirk is a junior from Sidney, Texas. He is very involved on Tarleton’s Stephenville campus and is in several different organizations. Kirk is very dedicated in everything that he does and it truly shows.

He decided to try out for the Texan Rider position mainly because he believed it was something interesting to do for the school. Although he is new to this position, he was asked what his mission statement is as the Texan Rider.

“To be the face of the school while represent what the school stands for, taking the core values and beliefs and incorporating into my life,” Kirk said.

Kirk is truly a people person, he enjoys meeting others and just has that motivation to share with others. Especially when it comes to expressing his love for Tarleton in a genuine manner.

“The Texan Rider is there for other students someone that they know, someone they can all trust,” Kirk said.

Kirk was able to learn a lot form the former Texan Rider during the past year through shadowing and watching Imbong. They both share that school spirit and love for Tarleton that is completely necessary for one of the big faces on campus. Kirk learned from Imbong that it was important to always give it your all, no matter what the situation may be as well as not being scared and going for it.

The spring semester is right around the corner and so is football season. Kirk is excited to see fellow students and Tarleton alumni during the spring semester at all the sporting events and Homecoming. Since you will be seeing the new Texan Rider a lot next semester make sure to say “hi” if you ever bump into him around campus.