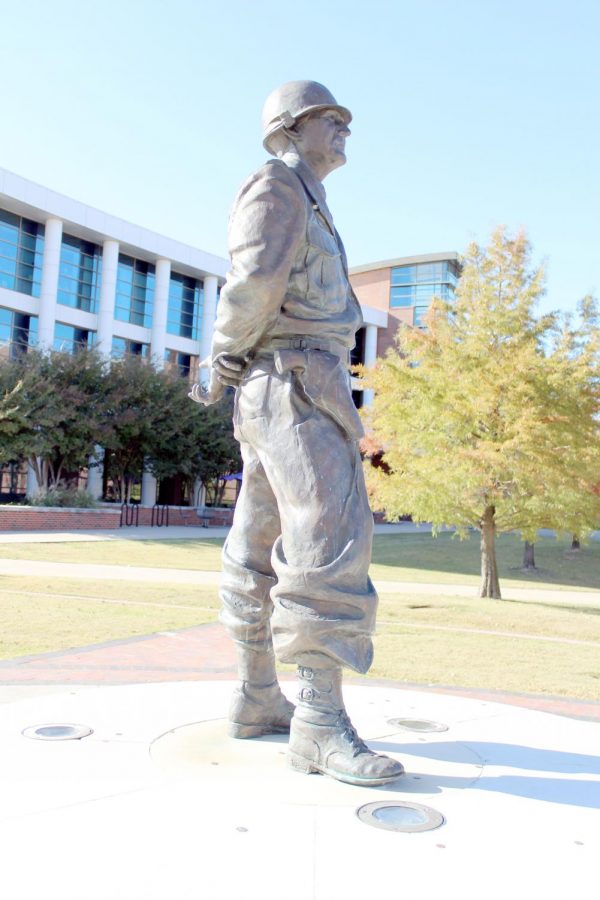 Statue of James Earl Rudder on Rudder Way. Rudder was a U.S. Army Major General who led troops at the Pointe du Hoc battle during the Invasion of Normandy.

Nov. 11 is a day that has been marked to celebrate and honor the veterans who bravely fought for the United States of America. Veterans Day is not only a federal holiday, but every single state has also made it an observed state holiday.

On Nov. 11, 1918 the Germans signed the Armistice, marking the end of the First World War. This day soon became known as Armistice Day. The United States President at the time, Woodrow Wilson, announced the first observed Armistice Day in 1919. Seven years later, in 1926, Congress passed a resolution requesting the President observe Armistice Day yearly with a display of American flags. Despite Congress’ resolution, the public holiday was not officially declared until 1939.

Originally Armistice Day was dedicated to world peace, and all government buildings were expected to display American flags in commemoration. However, in 1953, a bill was put forward to Congress, by U.S. Representative Ed Rees, to change Armistice Day to Veterans Day.

In 1954, following the end of the Korean War, President Dwight Eisenhower made the bill into a law, replacing Armistice Day with Veterans Day. Veterans Day celebrates all those who have served in the U.S. military, including the millions of living veterans, who are still among us
today.

While it is not only a day of remembrance of those who have served, it is also a time to show appreciation for the living veterans who made sacrifices to protect the rights and freedoms we all enjoy as Americans.

In Sept. 2016 the United States House of Representatives unanimously passed the Veterans Day Moment of Silence Act which proclaims the observation of silence for two minutes each year on Veterans Day. This act was created based on the inspiration of the Bendetson family consisting of Daniel, Michael and their father, Dr. Peter Bendetson of Weston, MA.

The two minutes of silence serves to recognize and reflect on the service and sacrifice of all veterans, past and present. The time of 1:11 p.m. allows for all 50 states and Puerto Rico to take
part simultaneously.

The national holiday is often marked by parades, church services, and in many places the American flag is flown at half mast. Some schools even take the day off to mark the occasion, while others hold special assemblies instead.

Veterans Day is important to celebrate because there are more veterans than you’d ever stop to think about on the average day to day basis. The United States has about 17.4 million veterans total, which is a staggering number when put into perspective.

The National Veterans Memorial and Museum located in Columbus, OH, honors all United States veterans. This includes veterans from all branches of service and from all eras of our nation’s proud history of military service, both peacetime and wartime.

The memorial and museum pay tribute to the sacrifices of servicemen and women and their
families. The elements of the exhibits link our national story to the larger context of world events
since our country’s earliest days, and demonstrates the importance of each individual veteran who helped shape our history.

The Tarleton Dining Hall recently joined a program offering meals for student veterans, funded by grant funds from the Texas Veterans Commission. The Meals for Vets program will provide eligible student veterans with a free hot meal daily on the Stephenville campus.

Meals for Vets is part of the Honor Veterans Now program which aims to eliminate hunger and vulnerability among veteran populations. Their primary focus is on those under the age of 60, living in Texas.

To be eligible for the program, household income must be less than $2,220 per month and student veterans can apply at www.mealsforvets.org/help or by visiting the Office of Veteran Services in the Tarleton Center.

It is estimated that nearly two million veterans under the age of 60 battle food insecurity and
about 1.5 million veterans live in poverty. Overall about 33% of the nation’s homeless population
is veterans. Over 700 veterans enroll at Tarleton each year.