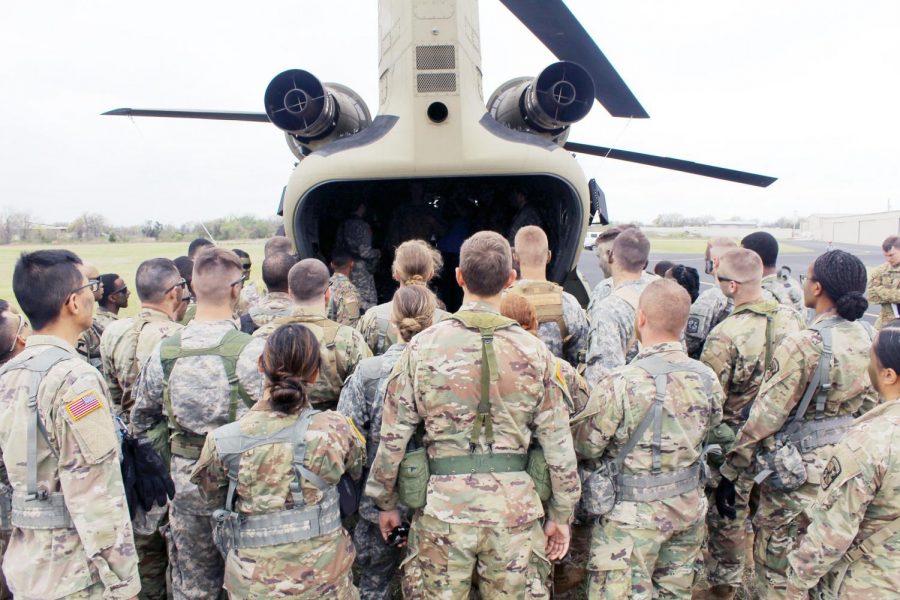 The Texan Corps of Cadets conducted their monthly Retreat Ceremony on Oct. 19. The Retreat Ceremony is a military tradition that lowers and folds the flag at around 5 p.m. signifying the end of the day. This Retreat Ceremony was led by Wainwright Cadet Peacock, and the flag was folded by Corps Ducks who volunteer. According to the Tarleton Website, The Texan Corps of Cadets is organized and maintained within the student body of Tarleton State University as a self-contained Corps of Cadets to promote student success. They are dedicated to the development of student Cadet’s leadership and character by means of military training and the regulation of their conduct in accordance with the principles of military discipline. This ceremony can be dated back to the Revolutionary War and is recognized as one of the oldest military traditions. During this time, drums were sounded and bugles were used as only a signal. After the Civil War, bugles were sounded by the entire cavalry, infantry and artillery during the ceremony. The sounding of the bugles remains in the tradition to this day. Tarleton conducts this ceremony because of its rich military history. From 1917 to the mid-1950s, Tarleton was a military college and required all male students to be in the Corps. The Corps were removed for a period of time, but when it was reinstated, it was decided to conduct a Retreat Ceremony once a month. This was decided in order to preserve Tarleton’s military history. “The retreat ceremony is important because it is part of military heritage and honoring the Cadets and their training and development,” Texan Corps of Cadets Commandant and Dean of Leadership and Military College, Colonel Kenny Weldon, said. Tarleton’s military heritage is not just tied to the Corps, but also to the student body. Since Tarleton was a military college for a while, the Corps was one of the biggest components of the school. Even if you were not involved in the Corps, it was a crucial part of Tarleton. “We wanted to keep the intent intact and be able to have them practice and hopefully introduce the importance of it,” Weldon said. The ceremony is not just to embrace Tarleton’s military heritage, but it is also focused on the care and honoring of the flag. “The flag is a symbol of the nation and we treat it with great respect by honoring it and what it represents,” Weldon said. “It is the freedom that the military defends.” There are certain protocols on how the flag is taken care of. It is not supposed to be on the ground but instead displayed on a podium. It is also not supposed to be displayed in the dark. “It is something we have done as a part of [the Cadets] training, honoring, and raising awareness to the student body,” Weldon said. On military installations where it is conducted every day, it is still an important moment where all traffic stops and everyone takes a moment to pause, show their respect and render honor. Even though it is only conducted once a month here at Tarleton, it is not something you get tired of. “You can get kind of used to it, but it is also a daily reminder of why you’re there,” Weldon said. Although it is a short ceremony, it is highly organized. There is a lot of making sure everyone is in the right place at the right time and wearing the correct uniform, and everyone taking responsibility to make it all happen. “I encourage students to come out and join the ceremony,” Weldon said. “It is short but very meaningful. You can really appreciate the moment.” Senior Corps Commander Ryan Thomas was involved in the Retreat Ceremony. “It is a monthly thing that is a deep-rooted military tradition, and it encourages campus engagement within the Corps,” Thomas said. Even during the time where there was no Corps at Tarleton, the Retreat Ceremony was still conducted because of the military heritage. “It is a signal of the end of day, but the bigger portion is the flag and what it represents, which is the sacrifices of American lives,” Thomas said. Junior Army Cadet Carter Bonneau was also involved in the Retreat Ceremony. “The Tarleton Corps holds this ceremony as a military tradition for our Cadets and our school,” Bonneau said. “It blends well with Tarleton’s already present military heritage and reverence.” Bonneau said that the importance of the ceremony is because of Tarleton’s military heritage. “The retreat ceremony is important because it is a direct connection to Tarleton’s past as a military training school,” Bonneau said. The Texan Corps of Cadets conducts the Retreat Ceremony on the third Monday of each month at the flagpole at the center of campus in front of the Education Building, World War I cannon and Alumni Island. Students interested in joining the Texan Corps of Cadets can learn more on their website at, www.tarleton.edu/cadets/cadetlife.html