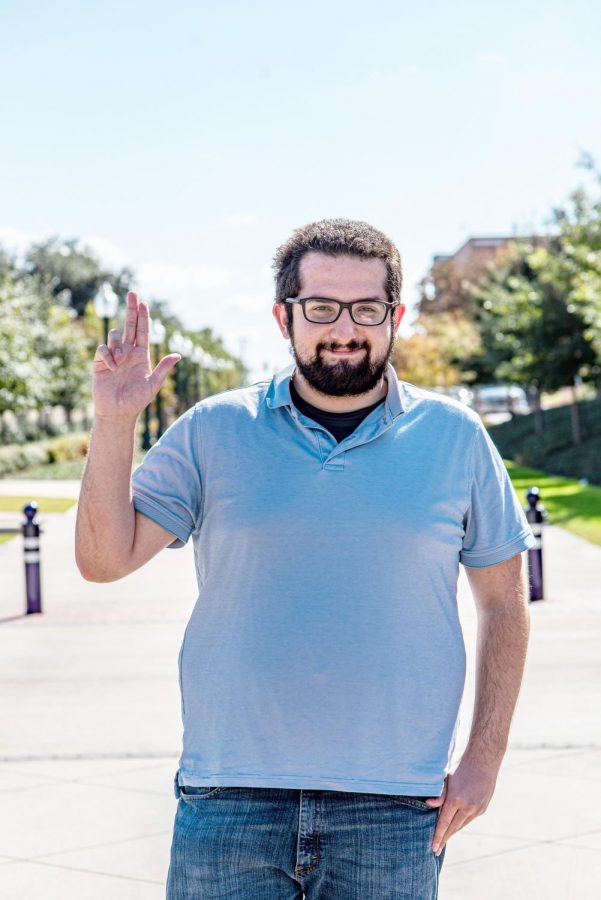 Eric Tedana poses for his Staff photo while working for The JTAC.

My college life can only be described, in my mind, as a wildfire.

My name is Eric Tedana, I am the current News Content Editor for The JTAC.

I’ve taken a very strange road to get here, as an Editor for The JTAC, which is mostly due to the fact my whole college career has been very non-traditional.

According to Merriam-Webster, a wildfire is defined as a sweeping and destructive conflagration, especially in the wilderness or a rural area, which I think describes my college life perfectly. Sweeping that word sticks out the most to me, since college has felt like one swift kick after another, yet no matter how much I got knocked down, I always stood back up.

I immediately dropped out during the first few weeks of spring 2017. I felt like it was all burning and spiraling around me. I was overwhelmed by the changes from high school to college. I felt undisciplined, since high school was honestly a breeze for me and unprepared, since I was a first generation college student.

From spring 2017 to fall 2017 I felt like I was a flame burning through everything around me at an uncontrolled rate. I also felt like I was frozen, stuck in place doing absolutely nothing as everything burned around me. That spring semester I felt like shock took over and I was stuck fanning the flames to a pure wildfire.

Those short months away from college did more to prepare me to come back to college, than four years of high school ever did. I came back determined to do something, I didn’t know what changed, clearly, since I switched majors from Theatre to General Business, and almost switched to English before that, but I came back ready nonetheless.

Taking on college the second time around, felt different, even though not much had changed. I still hated the education system, I still hated the idea of living with some random person I had never met before and I still didn’t know what I actually wanted to do with my life. Something had to be different, since, even though I wanted to, I kept going and refused to drop out a second time.

There are so many people, who did a lot to help me through college. I was welcomed back, by my fellow students, with a lot of support. Tarleton was a little reluctant to take me back, but the people I met throughout my time in college are honestly what kept me from burning my bridges, cutting my losses and dropping out for a second time.

Coming back, I meet some amazing people, Caroleena, Sarah, Alex, Dallas, Lexi, Logan and an endless list of names and faces I remember.  Thanks to Dallas, Lexi and Sarah, I was able to be a part of the founding team who started the TSU Film club, which later was combined with the TSU Art Society. During the short time the Film Club existed, I worked as our Secretary, Vice President and eventually President. I got to work on an amazing project, known as “Clint The Cowboy,” which was Sarah’s capstone project. Honestly it was the film club’s crowning achievement and it can be watched at www.youtube.com/watch?v=J5LLJTu-Gx4&feature=youtu.be.

I wish I had all the time and money in the world. I wish I could be at college for as long as it would take for me to graduate as a Theatre major. Honestly, as much as I hate going to classes and being at college, I love the college experience twice as much. I wish I did a lot of things differently during my time here, but sadly hindsight is 2020 and that seems to be all of our unlucky number.

Through The JTAC I’ve met a lot of people who have pushed me to be better. Klaire, Jess, Cassie, Caitlyn, Katherine and Hillary, thank you for the opportunity and the memories. The JTAC wasn’t a perfect job, but it’s one I will look back on as amazing and I appreciate all the people I’ve meet and all the skills I’ve learned during my time here. Thank you, Sarah for telling me to apply as a writer.

I’ve also met some great professors, who without their help and guidance, I definitely would have dropped out for a second time. Mark Holtof, Prudence Jones, Carol Stavish and Shayla Moose, thank you all for your help and guidance.

I’ve done a lot throughout my time here at Tarleton. I, helped found and run a club, worked on a huge number of theatre productions, wrote an absurd number of newspaper articles, which can all be read at jtacnews.com, I’ve worked as a contributor and shortly after moved up to editor, I’ve laughed, cried and tried to keep control on, what felt like an endless wildfire, that was my college career. I’m happy where I’m leaving things, it’s not a perfect ending, and like I said, if given the chance I’d change a lot, but still I’m happy that I made it.