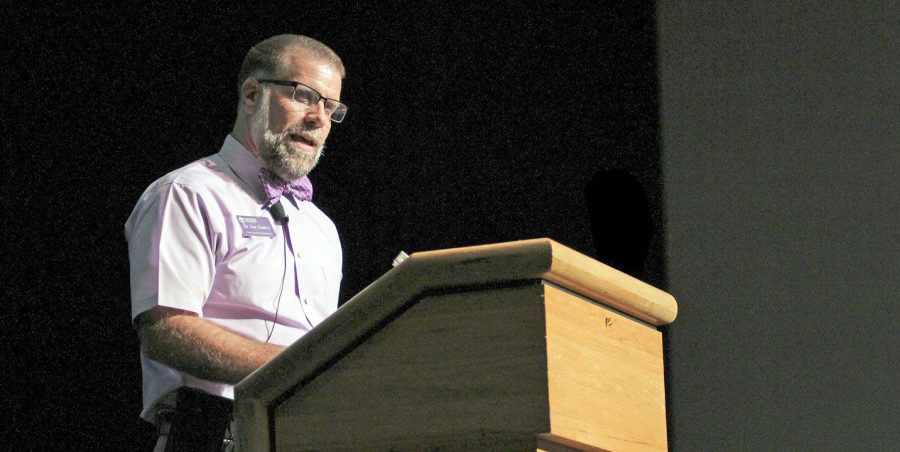 Since 2006, Dr. James Gentry has used his platform of preparing teachers to work with students, by implementing an all inclusive philosophy. Not only is Gentry an educator,  he is also a well established and published author. His impact on students and future educators reaches beyond the classroom.

As a child, Gentry had trouble reading and learning. It was the work of special education teachers that made a difference in his life. One of the things he noticed about reading as a child was the lack of representation in the books he read. This missing factor is what jump-started Gentry’s desire to address issues that normally make readers “uncomfortable.”  It wasn’t until adulthood that Gentry decided to address these issues head on.

After talking to a group of his friends who also felt underrepresented in children’s books, the fight for an all inclusive world of literature took flight. During his time as a teacher, Gentry was approached by a parent of one of his students who was battling leukemia. Following this conversation, Gentry and the student’s mother were motivated to write a book addressing the issue of childhood cancer, which allowed parents and students to openly discuss childhood illness. The students understood the disease more afterwards and Gentry learned the power of stories bringing people together.

“The books I am proudest of are the books about dyslexia. Most of them are about my childhood and some of the experiences I had as a child. When I look at them, I always think about how I wish they were around when I was a child, because I always felt so alone. I didn’t understand anything except the fact that everyone else was doing great and I was having trouble. I did not feel represented,” Gentry said.

The greatest challenges Gentry had to overcome as a writer, was people’s inability to be receptive to diversity. Gentry is a strong believer in embracing and viewing diversity as a strength rather than a weakness. Being the free spirited writer that he is, Gentry found it hard to accept that he could not please everyone.

“I’m a free spirit and sometimes seeing that it is not always accepted, it is hard. But when you write, you are pouring out your soul. Even if it is just a children’s book, it still represents what you believe and who you are. I look at the books I have written and I can truly say that I am proud of it,” Gentry said.

Gentry offers advice to those interested in pursuing their passion for writing.

“For students that wish to follow in my footsteps, I would say just always keep on writing. One of the things that helps you write, especially things that will engage young people, is working with young people. I was constantly thinking about the students I was working with so it led me to write stories. Sometimes, for my younger students, I would tell my stories in oral tradition,” Gentry said. “I have found that students liked when I taught with stories and examples. I realized that stories worked better when taught so I started to make up some that were sometimes based on real life circumstances or things that I have experienced and sometimes it was based on the stories I would hear from my students.”

Hoot was started in late July, 2020, by Christian and Zachery Gentry, who are not only the sons of Gentry, but are also software engineers at Zeal Labs. Christian is the Vice President of Software and Technology and Zachary is a developer.

Hoot was developed when Christian came up with the idea of introducing proper representation in books.  Despite the fact that most book companies are unwilling to take on “controversial” book ideas, the Gentry brothers knew that teachers, parents and students would be excited about books that help children overcome their daily challenges. After the idea was pitched, investors were added to the project and Gentry was appointed the role of board member advisor. The project was able to launch one of the most inclusive book collections to date.  The first official launch of the updated app was on Nov. 13, 2020.

In the time between the start of the company leading up to its launch date, over 50 books have been written, illustrated and narrated. Each of these books focus on providing kids representation for themselves. A lot of the books focus on learning differences such as dyslexia or autism, physical differences, such as being in a wheelchair or wearing glasses, multicultural differences, such as children with different skin colors or people that might be immigrating. The books also focus on people that celebrate different holidays  or that have different family dynamics such as foster families, same sex families and adoption. There are also books in the collection about general learning outcomes such as measuring, shapes and other things you find in general libraries of children’s media.

“One of the big focuses is that all the books are digital first. When you think of a traditional children’s book, it is bound to the physical medium. It can only be ink and paper. That means you have pictures and words and it cannot do much more to help kids interact with the content beyond that,” Christian said.

With digital first, the Hoot app is working on doing things that are only possible through digital mediums and making those standard across the platform. Instead of a book just having static images, the images are animated and the characters are moving and interacting in the scenes. You can click on the words and a narrator will read the word to you and tell you a definition. You can take tests and quizzes after each book or read the glossary before starting to show what the book is about and what questions might be asked. It all helps with understanding and comprehension. That is not something you can get from a traditional children’s book.

There are also glorified experiences that allow students to gain stars and level up as they read more books through the app. It allows students the ability to feel a sense of progression as they read which also increases user  enjoyment and allows kids to feel like they are actually making progress.

Gentry not only exhibits greatness but he encourages it as well. Whether it be overcoming an overlooked learning disability or writing and publishing books that both educate and entertain, the impact he has on Tarleton State University has gone beyond expectation. His philosophical thinking regarding all-inclusive learning methods is what sets him apart from other educators. Gentry has taken his own childhood “shortcomings” and used them to strengthen the future of educators while also shining light on how perfectly different each individual person truly is.