Who wore it best: inauguration outfits 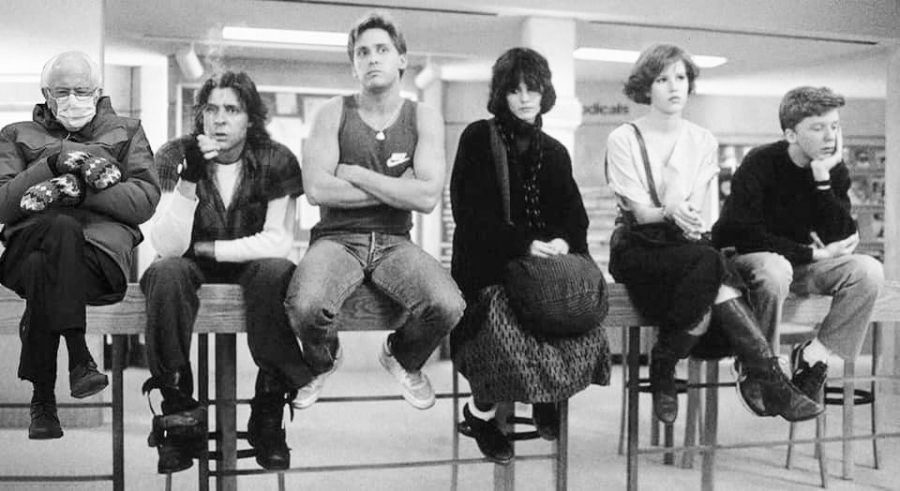 Bernie photoshopped into the famous library scene from The Breakfast Club.

On Jan. 20, 2021 Joe Biden was inaugurated as the 46th president of the United States. While the ceremony was captivating, one person stole show; Bernie Sanders, or should I say his homemade mittens. Sanders showed up to the inauguration in a beige parka, black slacks, while holding a manila folder in his mittens.
His attire incited many comments on the internet.
“Bernie dressed like the inauguration is on his to-do list today but ain’t his whole day,” @MsReeezy on Twitter tweeted.
The jokes didn’t end there. Internet users immediately got to work photoshopping Sanders into pictures from popular television shows, movies and other memes. My favorite meme is Sanders chilling with the Breakfast Club.
It didn’t take long for internet sleuths to find out who had made the mittens. The culprit, Jen Ellis, a second-grade teacher from Vermont. Ellis made the mittens for Sanders back in 2016 out of repurposed sweaters and fleece. In an interview with Good Morning America, Ellis was overjoyed to see Vermont being portrayed in such a fun manner.
“A little shoutout to Vermont and a little shoutout to the ordinary people who wake up with cold hands and put on mittens,” Ellis said to Good Morning America.
After the inauguration, Sanders spoke briefly with Gayle King on a CBS News broadcast where she asked about his mittens. He explains that people from Vermont care more about staying warm than making a fashion statement.
“In Vermont, we know something about the cold. We’re not so concerned about good fashion, we just want to stay warm. That’s what I did today,” Sanders said.
Although Sanders did have his fun with the meme, he didn’t let this distract him from the matter at hand. We have a new president, so we must get to work. On the evening of Jan. 20 on the Late Night with Seth Meyers show, Sanders expresses his hope that even though the country has been heavily divided over the past four years, we can still come together to help all Americans.
Sanders makes sure to separate Trump supporters from the people who stormed the capital on Jan. 6. He explains that the people who stormed the capital are fanatics who don’t believe in democracy but there are so many more Americans who voted for Trump that deserve to be heard in these trying times.
“There are tens of millions of other people who voted for Trump that are hurting economically, who are worried about the future for their kids, who are worried about the opioid epidemic that is hitting their communities, who are worried that they don’t have the kind of decent paying job they need, the healthcare they need and the educational opportunities their families need. I think we can reach out to those people,” Sanders said.
Sanders wasn’t the only person to steal attention away from the inauguration. Vice President Kamala Harris, First Lady Jill Biden and former First Ladies Michelle Obama, Laura Bush and Hillary Clinton stunned the audience with their seemingly planned monochromatic outfits.
Joe Biden’s granddaughters, Natalie and Naomi Biden and Inauguration Poet, Amanda Gorman also seemed to catch on to the fashion trend, with Natalie wearing a bubblegum pink dress and cardigan, Naomi in an all white coat and turtle neck and Gorman in an ankle length yellow jacket.
Lady Gaga and Jennifer Lopez also impressed with their designer outfits at the inauguration. Lady Gaga even matched her Schiaparelli dress to the mic she used during the National Anthem. Jennifer Lopez chose an all-white Chanel pants suit for her inauguration performance.
The fashion choices for the 2021 inauguration are one for the history books but it’s important to keep in mind the significance of the inauguration and what this can mean for you over the next four years. In the meantime, you can count on Sanders to bring a little joy to your timeline. If you want to check out more memes, which you should, you can follow the hashtag #Berniesmittens on Twitter, Facebook and Instagram.