Tarleton’s music department moves to the beat of COVID-19 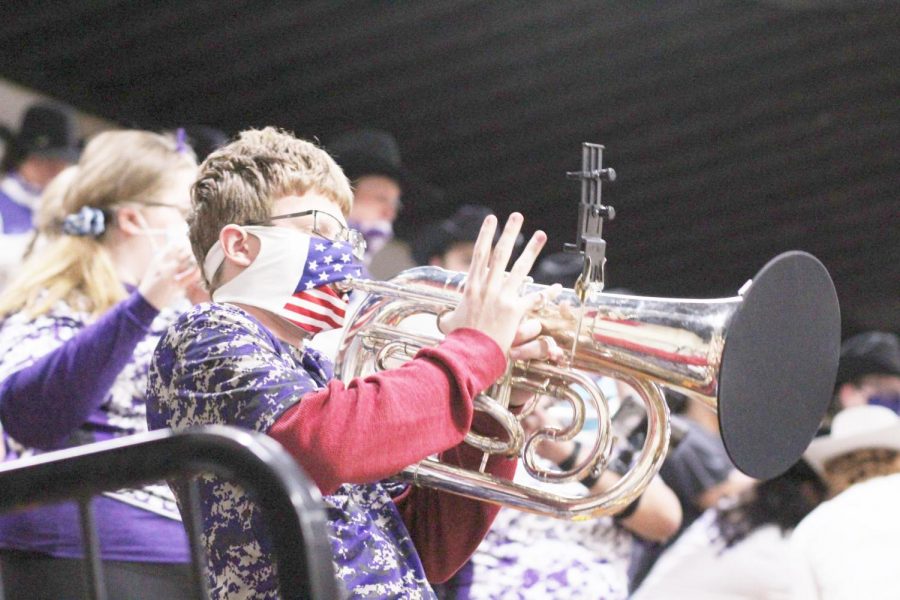 Chance Worthington playing the euphonium at midnight madness on Oct. 28 2020.

At the beginning of the pandemic, the music department at Tarleton State University knew that playing music was going to be an issue. The specific concerns were of wind and brass instruments, which are played with air coming out of them and cannot be played with a typical mask.
Despite the challenges, the Tarleton music department immediately got to work on how to continue the music program and hold performances in a safe way.
The College Band Director’s National Association (CBDNA) commissioned a full study through the University of Colorado to establish protocols that would allow collegiate music programs across the country to continue performing. There were several meetings over the summer and the music department spoke indirectly with the scientists behind the new protocols to answer any questions.
All of the protocols are based around the fact that COVID-19 is an airborn illness that is spread through aerosols according to the Center for Disease Control and Prevention (CDC). The protocols include six-foot social distancing and mandatory mask wearing for audience members and performers. The seats in the performance halls are spaced out to maintain social distancing, and only Tarleton students and staff are allowed to attend. For the wind and brass instruments, students wear a mask with a hole big enough for their instrument’s mouthpiece. While the hole in the mask may seem counterproductive, wearing the mask with the mouthpiece prevents aerosols from coming out of the nose and protects on the sides of the mouth. There are also bell covers with maximum efficiency reporting valves (MERV-13) air filtering materials that get used. During rehearsals and performances, air droplets get into the air while the instruments are being played. All rehearsals and performances are 30 minutes long, and in between practices portable air filters are used to clear out the room for another 30 minutes. The studies done of these protocols have showed that at a six-foot distance there is not an increased risk of issues. According to Dr. Robinson, the Director of Bands at Tarleton, there are zero known cases of spread at rehearsals using these protocols.
“There has been a lot of patience involved and a lot of time spent on preparation,” Robinson said.
Students have to spend more time listening to each other across the room since they are further away.
“Every student has to be a little bit more prepared walking into rehearsals,” Robinson said.
Since rehearsals are shorter, students have to put more effort into learning their music.
The music department consists of a Marching Band, two jazz bands and three concert bands which are Wind Ensemble, Symphonic Band and University Band. Marching Band was moved to the spring due to the football season being postponed. Because of this adjustment, the music department moved University Band, which is usually only in the spring, to this fall.
“The students really wanted to continue. They thrive on in-person performance and we missed it immensely during the spring,” Robinson said.
Some students have still chosen the online synchronous option.
“Although we can substitute virtual options, it is not the same and there is not as much of an educational and musical impact as doing it physically,” Robinson said.
Even though there are new restrictions and regulations, the students in the music program and in the bands were excited to get back in person and continue.
“I understand the six-foot social distancing, but it does make things challenging,” music education major, Joshua Verden said.
Since the students are still expected to sound the same with shorter rehearsal times, it has been tough on the students learning their music.
“We are at about the same performance level but not the right details, which come with time and rehearsal that we do not have,” Verden said.
Students are excited to be back in person, however, the regulations are causing some students to feel like they cannot reach their full potential.
“I like that we are back in person and I want to do the best I can, but it’s challenging with these regulations,” Verden said.
Even though the music department has done well in making the music programs work with the regulations and has provided students with the opportunity to continue their education in music, there were still devastations. The biggest impact that the music department faced was the Texas Music Educators Association Conference that the Wind Ensemble was invited to. This conference would have been in Feb. in San Antonio, Texas but was postponed to Feb. of 2022 due to travel restrictions. This was devastating for the music department, as it was a huge opportunity.
The pandemic has affected the learning experience for everyone. However, even with the setbacks that the music department has faced, they have done everything they can to safely continue the education of the music program students while also providing the university with beautiful performances.
In the spring, Marching Band will be performing during football games. The Jazz Bands, Wind Ensemble and Symphonic Band will also continue their performances. Information on concert dates and times can be found on the calendar at www.tarleton.edu/band/index.html.