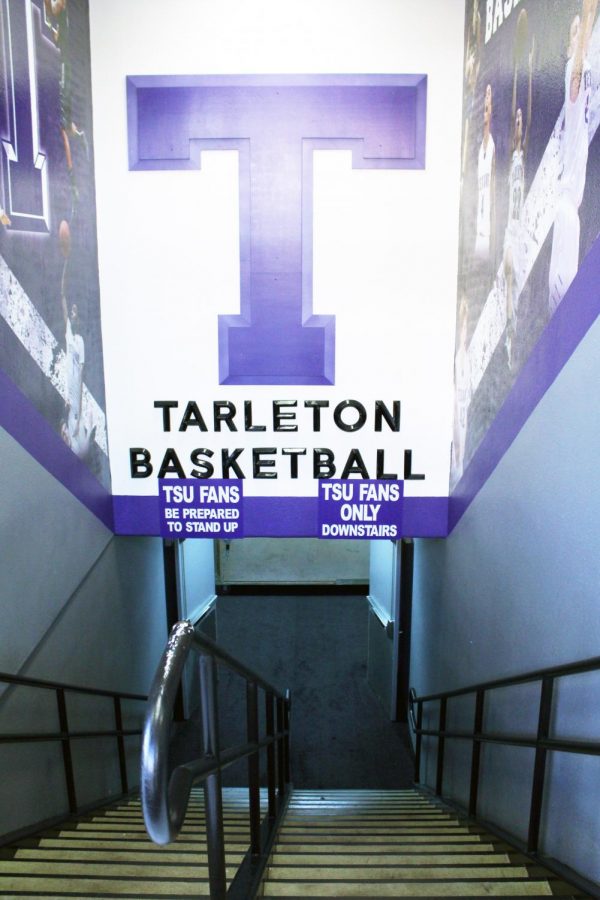 The Tarleton Basketball sign hangs over the stairway to enter the basketball court in Wisdom Gym.

What started off as a fun spring break turned into a global pandemic that affected working families, students and athletes all around the world. Although the pandemic did not directly affect the Tarleton State University men’s basketball team much, it has greatly changed the way basketball is played today. Even now, the Tarleton men’s basketball team has continued to push past through adversity and has continued to strive for better.
The Tarleton men’s basketball team was cordially invited to join the Western Athletic Conference (WAC) in November 2019. The Tarleton basketball team has been in the Lone Star Conference since 1994 where they won over 30 LSC championships. The Texans were officially deemed Division 1 on July 1, 2020.
During the 2019-20 season, the Tarleton men’s basketball team put up an average of 75 points per game resulting in a 2232 point season. The top five scoring players included Josh Hawley, Randall Broddie, Clashon Gaffney, Isaiah Range and Devin Bethely. The Texans capped off their pre-pandemic season with a 18-12 overall seasonal win/lose ratio and a 13-9 conference winning record. Overall, the 2019-20 basketball season proved to be quite promising for the Tarleton Texans.
After completing their last game on March 6, 2020, the world changed drastically. Although their time on the court was not hindered by the pandemic, practice schedules were greatly affected which caused worry amongst the team. The Texans worked diligently to stay on top of workouts and their personal physical health during the pandemic.
“There were a lot of safety measures and precautions taken in order to reduce the possibility of the team members getting sick with COVID-19. Aside from that, everyone was responsible for their own workouts in anticipation for the upcoming season,” basketball player, Clashon Gaffney said.
Although the pandemic has seemed to bring negativity along side it, one positive thing that happened for the team was the hiring of the new head coach, Billy Gillispie. The 12 time coach of the year was officially named the new head coach in time for the 2020-21 season.
Coach Gillispie has 20 years of high school coaching under his belt as well as a number of major college basketball teams. Gillispie has worked as a head coach at five different universities including Texas Tech, Texas A&M, Ranger Junior college and the University of Kentucky. Along with his head coach history, Gillispie has won a number of awards including WAC coach of the year, Big 12 coach of the year, and National JUCO coach of the year. Gillispie’s record and love for the sport will not only push Tarleton to be better but it will continue to strengthen the bond between the team and its fans.
“Coach Gillespie is very smart and he loves us. Sometimes the way he does things makes us think otherwise but as time passes, it is obvious that he has a method to his madness. As a person he has such a big heart and has a high standard for each of his players, and expects us to meet those standards everyday,” sophomore, Cadarius Bagget said.
“That is what makes him such a great coach. If you play for him, you’ll come out a better person then you came in because not only does he teach you basketball but he teaches you about life. We have come a long way with our health and safety. We wear masks and use hand sanitizer in the locker room while maintaining a healthy social life,” Baggett said.
Although the season has only just begun, the Tarleton Texans have won two games, postponed three, lost seven and cancelled nine. There are currently 10 upcoming games. The next scheduled home game is Feb. 26 at 7 p.m. in Wisdom Gym. The Texans will face New Mexico State. Tarleton currently has an average of 641 points for the season. The current leading scorers include Montre Gipson, Tahj Small, Jonathan Jackson Jr, Konstantin Dotsenko and Freddy Hicks. Although the season has not started off as expected, the Texans will continue to work hard and fight until the finish.
“My favorite part so far is just being able to play in general. With the pandemic going on, being able to play feels like a blessing. My least favorite part of the season has been the continuous cancellation of non-conference games,”sophomore, Javontae Hopkins said.
Much like all sports, the goal is to thrive in the face of adversity. Although the season has had a rocky start, the men’s basketball team has continued to follow their hearts and fight to the finish.
“I just want to win every game with the team this year. I want to rebuild this legacy from division two to division one,” freshman point guard, Shamir Bogues said.
Despite the constantly changing basketball schedule, the men’s team has stayed positive and continues to bring their all every time they step onto the court. The team currently has eight more games in the season, two of which are scheduled to take place in Wisdom Gym. There are currently no updates regarding the postponed games but for more information regarding this season’s schedule, visit www.tarletonsports.com.