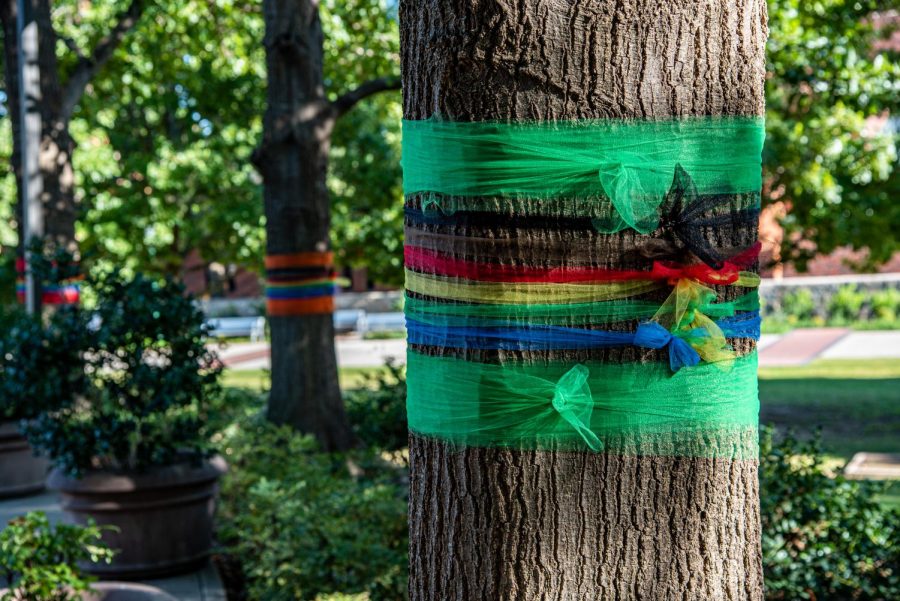 The Office of Diversity and Inclustion decorated trees with LGBTQ+ ribbons in front of the Barry B. Thompson Student Center.

Tarleton State University is making HIV testing readily available to students and faculty. Testing was planned to take place on Feb. 10, 2021 on the Stephenville campus and Feb. 11 on the Fort Worth campus but has since been postponed due to weather.
Tarleton’s Office of Diversity and Inclusion and International Programs (ODIIP) is putting on the event in order to raise awareness across all Tarleton Campuses.
“Taking responsibility for our health and safety is always extremely important,” ODIIP Student Specialist Emily Vankirk said. “When discussing heavily stigmatized illnesses like HIV/AIDS it is crucial to be mindful and proactive in our self-care, as sometimes these illnesses are the ones we know less about, or may need help to educate ourselves about.”
Previous experiences in providing HIV/AIDS testing to Tarleton students has proven that students will get tested if tests are available.
“We did annual programming for World Aids Day [on Dec. 1] and partnered with some student organizations, [such as the Tarleton Gay-Straight Alliance and Student Social Workers Association,] for one year to provide testing, and the response was overwhelming,” Vankirk said.
ODIIP is proud to provide tests to students who may not be able to get them otherwise.
“There was a gap in services; students were not educated about HIV or where, or how to get tested locally and [students] were extremely uncomfortable even talking about it. Although it might be uncomfortable, it is still very important. HIV affects millions of lives,” Vankirk said.
According to the Texas Department of State Health Services HIV/STD Program, the percentage of deaths due to HIV/AIDS per year, among people living with HIV in Texas has decreased by 19% over the last 8 years, from 61% to 42%. During the same time period, the rate of new HIV diagnoses has remained relatively stable at about 4,400. As a result, the number of people living with HIV in Texas has steadily increased from about 68,000 in 2010, to over 94,000 in 2018. With the number of HIV cases rising, it is more important than ever to be responsible about your sexual health and get tested.
“[Avoiding] getting tested [for HIV] doesn’t keep you any safer. So, we have decided to bring in testing annually to help students, faculty, or anyone get comfortable with being pro-active about their wellness and sexual safety,” Vankirk said.
More people live with HIV than many of us are aware of or would like to think.
“[People should be tested for HIV/AIDS] once about every three months,” Vankirk said.
It was also confirmed that there will be more testing available in the future at Tarleton, but the date and location of the future HIV testing are still undecided.
“The Student Health Center does provide testing for HIV and a number of other STIs. [Also] you can be HIV positive, and be unaware. Getting tested and being diagnosed early on can be lifesaving,” Vankirk said.
The Texas Department of State Health Services HIV/STD Program also says that early effective treatment of HIV is important in order to reduce new HIV transmission. Routine HIV testing for all people seeking health care help identify people living with HIV earlier, by removing barriers to testing. Pre-exposure prophylaxis (PrEP) and non-occupational post-exposure prophylaxis (nPEP) are effective at preventing transmission of HIV for people at increased risk.
“Helping people make responsible decisions in their day to day lives about their sexual safety [is very important to ODIIP],” Vankirk said.
In addition to HIV testing being available on the Stephenville campus, there will also be testing partners who are trained professionals. These trained professionals will help support anyone who does test positive for HIV and will refer them to other resources.
“Additional information about HIV/AIDS awareness and understanding will be available. [In addition to the] trained professionals [who are equipped to] support anyone who does test positive, [they] have been reaching out to connect with folks in those areas because we believe that the more support students feel at this juncture the better. While personal representation may not be possible for all areas, we plan to offer information about these resources and how to connect with them,” Vankirk said.
“This program had originally started from a student collaboration way-back-when, and has since become a staple of our programming. If you see a need on campus, talk to us. Tarleton is here for you,” Vankirk said.
HIV and AIDS interferes with the body’s ability to fight infections, and can become twice as serious if someone is positive and contracts another disease.
HIV and AIDS can be transmitted through sexual contact or contact with an infected persons bodily fluids. Examples of this includes things like blood, semen, and vaginal fluids. For more information, please reach out to Emily Vankirk at [email protected]