Games to watch for this week 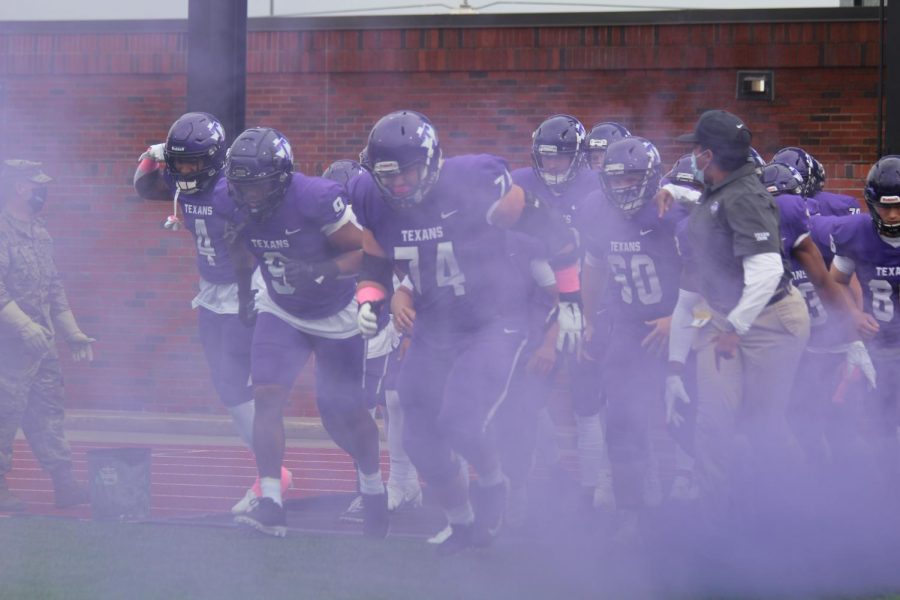 Tarleton Football players making their entrance into Memorial Stadium for the game on March 6, 2021.

Tarleton State University sports have been going non-stop since the beginning of this semester. There was much excitement in the air to begin these sports because this was Tarleton’s first Division 1 season and COVID-19 caused a pause in last semester’s sports.
This week is homecoming week! There are many exciting events around campus and many exciting games. Tarleton Football will be playing Midwestern State on Saturday, March 20 at 6 p.m. at Memorial Stadium. Tarleton played MSU last in November 2019. That game resulted in a huge Tarleton win with the score being 66-7.
The Tarleton Volleyball team has a busy travel week. The Texans played New Mexico State in Las Cruces, NM on Monday, the 15 at 4 p.m. and Tuesday, the 16 at 1 p.m. Tarleton will also be playing Texas Christian University again on Saturday, the 20 in Fort Worth at 2 p.m. The last time the Texans played TCU was just a few weeks ago in February of this year. This game resulted in a huge win for Tarleton State with a score of 3-1.
Men’s Basketball and Women’s Basketball ended their season on Saturday, March 6 with two wins for the Men’s Basketball Team and one win and one loss for the Women’s Basketball team.
Tarleton Baseball will also have a very busy travel week. They will be playing Dallas Baptist University in a four-game match starting on Thursday, March 18 going until Sunday March 21. Tarleton will be playing all of those games in Dallas, Texas.
Tarleton Softball also has a busy travel week this week as well. Tarleton State will kick off their busy week with a home game on Wednesday, March 17 at 6 p.m. against Abilene Christian University. Then Tarleton will spend Saturday, the 20th and Sunday the 21 in Lubbock, Texas playing University of Texas at El Paso (UTEP) and Texas Tech. The Texans will play UTEP on Saturday, at 12 p.m. and then will playing Texas Tech on Saturday, at 4 p.m., Sunday at 12 p.m., and Sunday again at 2 p.m.
Tarleton Women’s Tennis will be playing away on Friday the 19 and Saturday, the 20. They will be playing in St. George, Utah against Chicago State on Friday and Grand Canyon on Saturday.
Lastly, the Tarleton Track and Field team will kick off their season at the Wes Kittley ACU Invitational with a three-day tournament on Thursday, March 18 through Saturday, March 20 in Abilene, Texas.