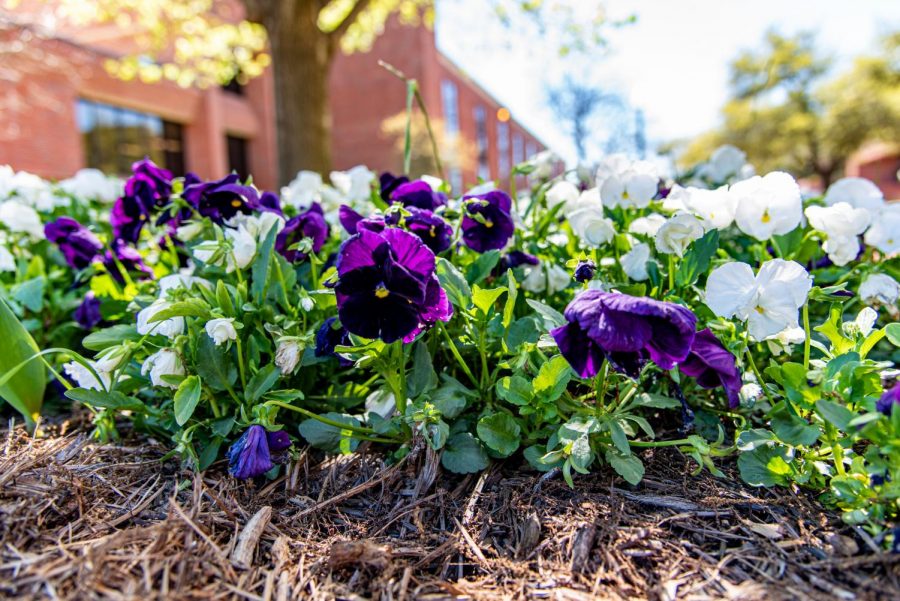 Purple and white flowers outside of the Barry B. Thompson Student Center

On March 24, 2021 the JTAC’s Instagram ran a few poll’s in our stories and one of the polls was “Starbies vs. Dunkin’?”
Students and followers’ responses started to come in soon after. In total the post recieved 34 votes for Starbies and 23 votes for Dunkin’.
“Starbucks, I just don’t like Dunkin’ Donuts really,” Atleigh Hardaway said.
The closest Dunkin’ Donuts is located inside of Tarleton’s Dining hall and is open all week from 7 a.m. to 3 p.m. while the Dick Smith Library has its own version of Starbucks. The Study Grounds Café serves Starbucks coffee but does not accept Starbucks gift cards. The closest fully functioning Starbucks is located at 413 W Hwy 377 in Stephenville.
“Dunkin’ Donuts, we have a Dunkin’ that’s in my home town so I just go to Dunkin’ and it’s close to D-hall so whenever we go to D-hall it’s right there. So, it’s convenient,” Taylor Sanders said.
“Starbucks, I think I just got used to Starbucks so I just go to Starbucks,” Tonia Garnett said.
The main responses that the survey got were that while Dunkin’ is cheaper, Starbucks has better taste and is more energizing, although this might not be true for everyone.
“Dunkin’, I feel like it’s a little bit more energizing. It has a little bit more caffeine and the lines are shorter,” Deja Cole-Clark said.
“Starbucks, it just tastes better,” Laura Hunter said.
“Starbucks, it keeps me more awake,” Grant Nickles said.
“Starbucks, I think the coffee is just a bit stronger and I like coffee. It’s not as sugary in my opinion,” Madison Darczi said.
We also surveyed our contributors and some of the other staff members in our office.
“I choose neither because I don’t drink coffee. [If I had to pick] I would go with Starbucks because I do like their lemon bread but probably Starbucks just due to how widely popular their brand is,” Grassburr Editor, Dane Hazel said.
“I don’t drink coffee but I prefer Starbucks because they have the Refreshers,” The Source Associate, Kylan Mills said.
“Dunkin’ because it tastes better and is cheaper than Starbucks,” The JTAC Contributor, Jessica Blakely said.
We ran another poll the next day that asked “Where do you go to get your coffee and why?” because we felt that the Starbies vs. Dunkin’ poll was too narrow to get accurate results from Tarleton students. This poll received a few responses for coffee shops other than Starbucks or Dunkin’ Donuts.
“Rodeo Grounds!! Best coffee, sweetest staff,”@megan_heard19 said.
“Starbucks [because] I grew up in [a place where] Dunkin’ or Beans and Franks isn’t a thing,” @shyannembrooks said.
“Starbucks [because] it’s good,” @lovelylynn_2390 said.
If you would like to participate in our next surprise survey, you can follow us on Instagram @thejtac1919 and be on the lookout for your chance to be featured in our next issue.
You can also submit story ideas to: www.tarleton.edu/studentpublications/storyidea.html
Or follow us on Twitter @ TheJTAC1919 and Facebook @ thejtac to keep up with us on other platforms.