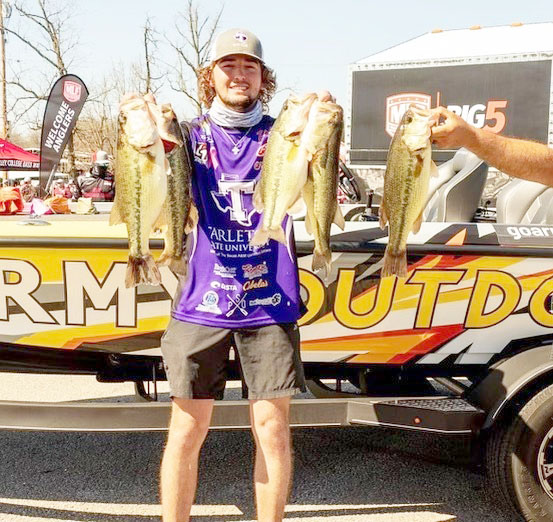 Kasen Keese with his five fish caught on Table Rock lake on March 26, 2021.

Tarleton State University is home to one of the highest-ranking collegiate Bass Clubs in The Association of Collegiate Anglers (ACA) Bass Pro Shops School of the Year 2020-2021 standings. As of April 1, 2021 the club is the second highest ranked school from Texas. They are placed at number 12 overall with 8700 total points earned across all teams.
The club is continuing to fish the ACA tournaments while also making their way through the qualifying tournaments for the 2022 Major League Fishing National Championship (MLFNC) hosted by Abu Garcia College Fishing.
Members of the Bass Club have been on the road almost the entire semester traveling from state to state to keep up with the tournament trails that they fish.
“[My favorite part of being on the Bass Club] was getting to travel. Seeing a lot of areas of the country that I had not seen before and then obviously the people were [and are] awesome,” Tarleton Graduate Assistant for Club Sports and previous Bass Club President, Cason Kelly said. “I love to travel and through the Bass Club I got to visit some places that I wouldn’t have otherwise.”
On March 26, 2021 Kasen Keese placed third in the MLFNC qualifier tournament hosted on Table Rock Lake in Branson, MO. Keese had a total weight of 17 pounds and six ounces with five scorable fish.
A scorable fish is a fish that is a largemouth, spotted, redeye or smallmouth bass that is 12 inches or longer. The fish must also be alive at the time of the weigh in, there is a penalty for each dead fish. The penalties are weight deducted from their total fish caught.

Anglers can only weigh in a maximum of five fish total so if they catch more than five fish in a day they must do what is called culling. Culling is when the angler only keeps the five biggest fish to weigh in and they return the smallest fish to the lake. It is important to know that an angler can only have five bass in the boat at a time in most places as that is the legal limit. This means that most of the time the anglers will cull fish while still on the water.
Keese’s third place finish secured his spot in the MLFNC tournament. The date and location of the MLFNC tournament has not yet been revealed.
The Bass Club will be fishing at Lake Somerville on April 16, 2021. This tournament will be another MLFNC qualifier and another chance for the Bass Club to secure a spot in the MLFNC tournament.
The MLFNC tournament is not the only championship that the Bass Club is preparing for as the ACA National Championship tournament is coming up on May 26 and 27 and will be on Lake Murray in SC.
“The Bass Club has been battling for a top 10 position in the nation. They’ve been up to I think it was number five or six and then we’ve currently been pushed back down to 12,” Kelly said. “As far as the School of the Year race goes, since October they’ve been firing on all cylinders.”
With the amount of traveling that comes with being a part of the Bass Club members have been taking advantage of Tarleton’s hyflex course options.
“I do think though with the COVID-19 accommodations and the introduction of hybrid classes and especially online classes, it actually helps them because they can do their school work on the road a lot,” Kelly said. “I know even before COVID-19 started, like when I was fishing, there were more than a few guys that took solely online classes so that they could travel more.”
Tarleton’s Bass Club will also be sponsoring two $1,000 scholarships to Tarleton that will be given to the winning team in the Texas High School Bass Association Regional Tournament for the North, West and Metro areas. This tournament will take place on April 17, 2021 on Lake Lewisville.