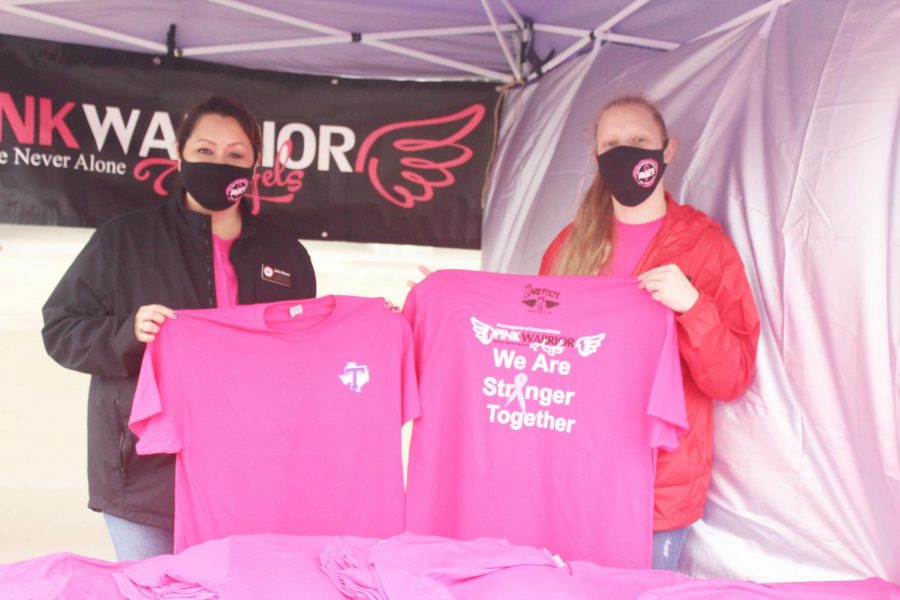 PWATX Founder and Executive Director, Julie Moser and Vice President and Director of Financial Aid, Elly Lynch selling shirts at the Tailgate before the Tarleton Pink Out Football game on Feb. 27, 2021.

Pink Warrior Angels of Texas (PWATX) is an organization focused on supporting those who have been diagnosed with cancer.
PWATX was founded in 2017 by breast cancer survivor and military spouse Julie Moser, who was diagnosed at age 39. After the diagnosis, Moser was given an “angel,” which was someone who has been through the same diagnosis and treatment. During the process, her angel was there to comfort, support and help Moser through treatment.
Moser’s “angel” was Mary Lee Considine, a breast cancer warrior, military spouse and Tarleton alumna. Both being military spouses and breast cancer warriors, Moser and Considine as well as their families became close as they helped each other through the fight with cancer.
Considine studied Communications at Tarleton for her undergraduate degree and moved on to pursue a master’s in English. She was a graduate assistant for the English department, she was a Texan Star, she started the alumni association for the Texan Stars and she worked for the JTAC.
While Considine lost her battle to cancer in 2019, her legacy still lives on at Tarleton and in PWATX. Two scholarships were named in her honor, one from PWATX and one from Tarleton.
PWATX started as a focus on breast cancer but moved to supporting warriors for all cancers.
“We started the slogan ‘what’s your color?’ so that we could start a conversation about different cancers and different colored ribbons for cancer,” Moser said. “The mission [of PWATX] is to ensure that no one is fighting alone.”
Moser said that financial assistance is important when it comes to a cancer diagnosis and treatment.
“I found very quickly that being in a military family is still middle class and we were not eligible for [any assistance]. While we have great insurance because of the military, I could not work my full-time job,” Moser said.
One aspect present in cancer diagnoses is financial toxicity. Insecurity when it comes to buying groceries, paying bills and still maintaining a quality of life is concerning in these situations.
“The mental stress of financial toxicity is overwhelming, and it should not be a focus when you are trying to heal and fight cancer. Chemotherapy, radiation, immunotherapy and anything like that takes a lot out of you and what we should be focusing on is healing, recovering and fighting,” Moser said.
Financial assistance and support in all areas of life for cancer warriors and their families is a part of the purpose of PWATX.
“For me it is easy to tell the story but to relay that to a reader who doesn’t have cancer or [can’t relate to someone with cancer.] Whether you are an adult or not, it is hard to wrap your mind around what someone goes through because there is a stigma,” Moser said. “Once the newness of the cancer diagnosis wears off, people are not there anymore. That person going through it needs that longevity [of support]. It is not a two-month thing, it can take six months to a year to get yourself back where you need to be after treatment.”
The biggest event that PWATX hosts is their three-series run called the Cancer Warrior Dash. The first series is called Taco-Bout Cancer in May, the second series is a color run in September and the third series is called Holiday Ho Ho Hope for Cancer in December. The purpose of the three-series run is not only for fundraising but also to promote health and get people moving.

PWATX also hosts an annual 5k to spread awareness and raise funds. In October, they host a Pink Block Party sponsored by Home Base. They also partner with Tarleton Athletics for the Pink Out football game every season.
Lastly, they host the Runway of Hope. This is an opportunity for cancer warriors to have a day of pampering where they get all dolled up and have both runway coaching and life coaching.
Major John Considine, Mary Lee Considine’s husband, still remains close to PWATX and those involved. John Considine is an Army Veteran who works as a Cadet Training Officer for the Texan Corps of Cadets. The impact Mary Lee Considine made at Tarleton remains even though she is not here to see it. Along with a scholarship in her name, there is also talk about expanding the support to students by creating a PWATX chapter on campus. This would allow students and families struggling with a cancer diagnosis and treatment to get much needed support.
“[This] organization does not care where you are, they will support you,” John Considine said.
PWATX has no paid staff, so all funds go to providing support for warriors and families, events, meal chains and potential research.
“They focus on providing direct support to the survivor and family. As a survivor you are not getting financial support as easy, so helps with the here and now. [Even] just the little things like gas money for treatment,” John Considine said.
PWATX is always looking for volunteers. For more information, visit www.pwatx.org.