Tarleton Athletics prepares to wrap up its first Division 1 season 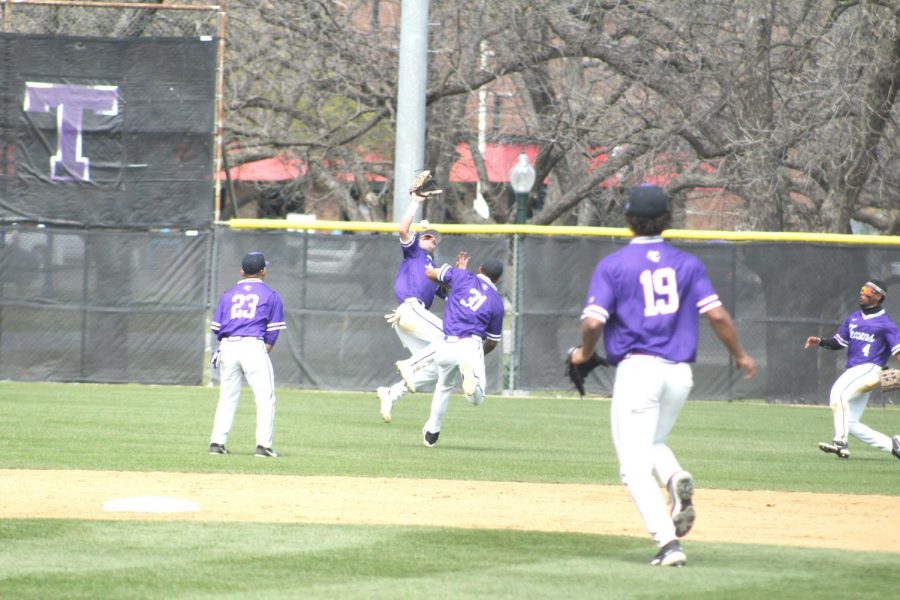 Tarleton outfielder Wade Raburn getting hit in the face by a ball on April 2, 2021 during the game against Dixie State during a collision with infielder Kemuel Thomas-Rivera.

Tarleton State University is coming to the end of fall sports and is currently in the middle of spring sports.
Tarleton Football had their last game finishing up their first season competing in the Division 1.
The home game ended in defeat to East Central University (ECU) with a final score of 14-21. In the first quarter the Texans were able to score pretty quickly. Near the end of the quarter they allowed ECU to score too.
Going all the way into the third quarter the Texans gave up two more touchdowns to ECU. With five minutes left of the quarter the Texans scored the final points for the game. Wide receiver, Tariq Bitson completed a 26-yard pass from quarterback, Steven Duncan resulting in a touchdown.
During the final game, Tarleton managed only 55 rushing yards, which made it their lowest output of the season.
During this game, the Texans had three turnovers, which included two costly fumbles. The first fumble the Texans made was on a kickoff return that turned into an East Central touchdown to start the third quarter. The other was on the 3-yard line when the Texans were looking to tie the game in the fourth quarter.
The Texans fought hard through their time on the field, and although this was their final Football game for the season, they are expected to return just as determined in September of 2021.
Tarleton Athletics released the 2021 fall Football schedule on Friday, April 2. To see the schedule, you can visit: tarletonsports.com/sports/football/schedule.
Men’s Baseball has also been keeping busy. Starting off this month, the Texans played WAC competitor Dixie State for the first time.
For this four-game series they started off strong by winning on April 1 with a final score of 10-9.
Continuing into the weekend on April 2, the Texans took defeat for both games during their double header. They lost 1-5 in their first game and 4-7 in their second. On Sunday, they completed their final game in the series and took another loss with a score of 9-13.
The Men’s Baseball team played Texas Christian University (TCU) twice. Once on April 6, with a home field advantage, and took defeat. Then again on April 13, at Lupton Stadium. The Texans will play TCU again.
The men played in the WAC competition against Seattle University for the first time on April 9 through 11. In both of these games the Texans were able to play Seattle.
The Women’s Softball team had two WAC conference series. One conference was against Dixie State on April 2 and 3, and the other against California Baptist University (CBU) on April 9 and 10.
On Friday, April 2 against Dixie State the Texans lost both games, but on Saturday, they were able to take home a win. The first game on Friday was a close one with a score of 7-8, and the second game was a loss of 1-7. Following that, the Texans had a win on Saturday of 11-5.
The series against CBU was played with the home field advantage at the Tarleton Softball Complex.
The Texans Men’s and Women’s Track and Field recently competed in three invitationals.
On March 31 and April 1, they competed in the David Noble Relays in San Angelo, Texas. Over the two days, five different Texans were able to set 34 personal records. The five athletes that set records were seniors Emily Simon and Skyler Sandusky, freshmen Sarah Ahmadi and Isaac Hutchings, and junior Chandee Bachmeyer.
On April 2 and 3, the Texans competed in the UTA Invitational in Arlington, Texas. This meet ended up making history for TSU with earning the school’s first individual first place finish competing in Division 1. Junior Gentrye Muden took first place in the high jump, clearing 5’ 6”.
On April 10, ending the second week, the track team participated in the North Texas Classic in Denton, Texas.
After the last competition, Tarleton has an opportunity to see how its athletes stack up against the nation’s best team.
On April 16 and 17, Tarleton will go to Baylor for the Michael Johnson Invitational.
The Texans will then compete at Tarleton, when the university hosts the Joe Gillispie Invitational on April 22.
Women’s Tennis started off April strong by competing against WAC competitor New Mexico State on April 2. The Texans were able to take the win of 4-3. Then on April 3 they competed against University of Texas Rio Grande Valley and were able to win again, 5-2. Finally on April 13, they had a neutral match against University of Texas Permian Basin.
Tarleton Golf is in full swing with their season. The Texans had their final seasonal Golf tournament on April 12 and 13. This tournament was held in Oklahoma, and the Texans were in sixth place on the end of day one. Tarleton State University was one of the many Universities that Oklahoma hosted at the tournament. Oral Roberts, future WAC member Stephen F. Austin, Arkansas-Little Rock, Missouri State, Wichita State and Western Texas College were also all present at the tournament For more information on Tarleton Golf, and to stay up to date with the current season, visit TarletonSports.com or on Twitter @TarletonWGolf.
Be sure to follow along in the Tarleton Sports app for upcoming games as well as current games and live stats.
To purchase tickets for any upcoming home games in the 2021 season, you can visit tarletonsports.com/sports/2019/3/28/new-tickets.aspx.