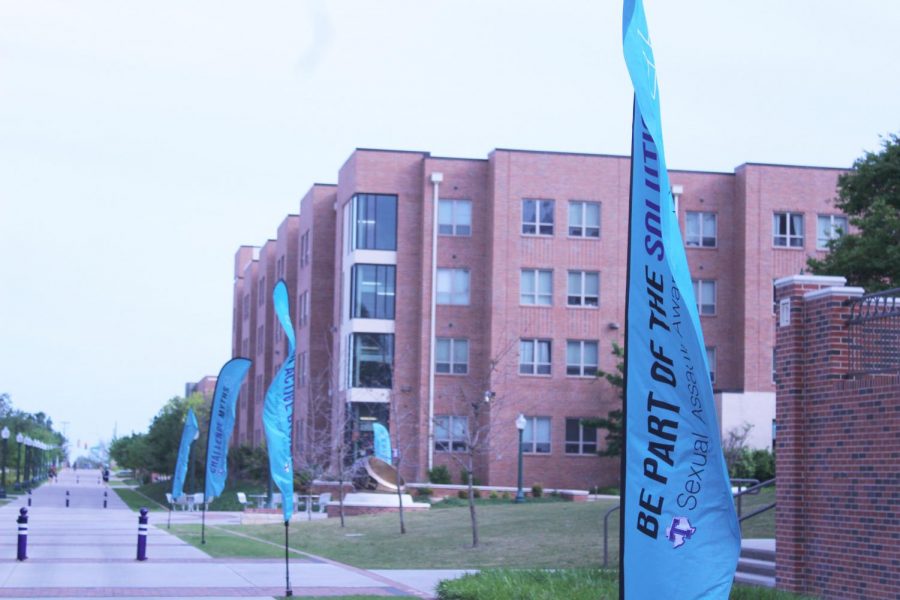 Teal Tuesday goes beyond free blue t-shirts and campus-wide rallies. Tarleton has shown its support for Teal Tuesday by adding colorful banners along Rudder Way and many other locations on campus.

Tarleton Student Counseling Services (TSCS), Tarleton Public Health Association (TPHA) and Tarleton Public Health Student Association (TPHSA) is recognizing Sexual Assault Awareness Month (SAAM) during the month of April.
SAAM is promoted to educate and engage communities to reduce widespread sexual violence, harassment and abuse. SAAM started in April 2001 as an organized event by the National Sexual Violence Resource Center. However, it can be traced back to the 1960s and 1970s.
A few years ago, another department on campus offered to host a shop where faculty and staff could purchase branded teal attire. Every T-shirt for SAAM has been designed by a student.
The kick-off event for SAAM was organized on Tuesday, April 6, by the National Public Health Week Celebration, Tarleton Public Health Association and Student Counseling Services. The kick-off began with a tabling event outside of the dining hall where they handed out Teal Tuesday shirts and provided information about SAAM. This year, the initiative also includes education and awareness on building safe online spaces.
Caris Thetford is the Assistant Director for Student Counseling Services, and Subi Gandhi is an Associate Professor of Public Health.
“Sexual assault is a community problem. This is a form of violence that exists in every community. Violence occurs more frequently in communities [where] there is low recognition of the attitudes, beliefs and behaviors that lead to sexual assault,” Thetford and Gandhi said.
Resources to help educate people on recognizing these behaviors can be found on the National Sexual Violence Resource Center (nsvrc.org) and the Rape, Abuse, Incest National Network (rainn.org).
“On Tarleton’s campus, SAAM started around 2015 and has become a well-recognized and sustained effort across departments, divisions and campuses. A then student, Katie Bryan, who now works in academic advising, came up with the Teal Tuesday idea. When recognition is low, victim-blaming is high. This provides camouflage for harm to occur and reduces the likelihood of a perpetrator being held accountable for their behavior. This can turn into an ugly, downward spiral in which harmful behavior is likely to be repeated because there are no consequences for that behavior,” Thetford and Gandhi said.
Victim blaming is the attitude which suggests that the victim is responsible for the assault when in reality, it is the fault of the perpetrator.
“The opposite is also true. In communities [where] harmful attitudes, beliefs and behaviors are recognized and community members understand how these things contribute to a culture tolerant of violence, community members are less likely to engage in those behaviors. No healthy, sane person wants to cause harm. But we all contribute when we engage in behavior like victim-blaming,” Thetford and Gandhi said.

“When we know better, we do better. Then when harm does occur, the person who was hurt is more likely to seek help and support. The perpetrator is more likely to be held accountable, thereby interrupting what could have been a repeated, ongoing behavior. The community is safer and ultimately, healthier. This is why awareness and prevention are so deeply integrated into a thriving and healthy community,” Thetford and Gandhi said.
Counseling Services is hosting a variety of training opportunities, all of which are available on Zoom. Many departments across campus such as Public Health, Social Work, Counseling Services and the Tarleton Wellness Center are helping with information dissemination of the training events. Information is shared through social media to encourage the community to actively participate in Teal Tuesdays and to share information and resources. There was also a community event earlier this month called Stop the Silence that focused on educating the community on victim’s rights.
“We need everyone’s voice and participation to raise awareness and prevent sexual abuse in our society survivors, victims, family members, friends and anyone that can partake in the cause. [SAAM] helps to empower those that have gone through sexual violence and harassment, provides tools and strategies to those going through such experiences and educates those who can intervene to prevent sexual violence. [SAAM] is an avenue to create allies and stop such atrocious acts before they even occur,” Thetford and Gandhi said.
The library staff and campus recreation staff have allowed banners and messages of support written by community members in their windows. Academic departments like Public Health, Criminal Justice, and Social Work have also partnered with prevention services to share information and host events. The Student Athlete Advisory Council and student athletes from all sports have joined over the past few years to help run kickoff events. They have promoted and participated in training, and the athletic department has shared content through their social media channels. Even the tennis team is wearing SAAM shirts this year during their warm ups before matches.
“We are both just tremendously grateful for the ongoing commitment of our community to this issue. Sexual assault is a difficult topic to talk about, it is an ugly reality to recognize and overcome,” Thetford and Gandhi said. “[When] we started working toward a coordinated and comprehensive [SAAM] several years ago, people came out of the woodwork to support those efforts. This is a month that has very personal meaning for many of our community members and it is important for us to honor that reality. If a community member has not been personally impacted by some form of sexual harassment, abuse, or assault, they almost certainly know and love someone who has.”
“[This] is a community problem and we are only going to solve it as a community that invests in solutions that supports survivors, that challenges myths and misinformation, that steps in to stop a problem before it becomes a problem, and that holds those who commit harm accountable,” Thetford and Gandhi said.
Public health is focused on preventing disease and prolonging life. Overall, public health’s goal is to protect the health of all populations, including sexual health. Therefore, sexual assault and harassment are a public health problem.
“From a public health perspective, sexual assault has been an epidemic. We haven’t really been able to tell what degree over time and I feel like now we’re finally in the right social climate to have survivors and victims speak out against sexual assault. The whole concept of [SAAM] is to boost awareness but to also figure out how to support victims and change the trajectory of sexual assault in America and throughout the world,” TPHSA President, Jasmine Shafer said. “Public health in ingrained into everything. You could take a topic, sexual assault for example, and see that public health is related to it.”
Information about SAAM and public health can be found on the Counseling Services Instagram, Twitter, Facebook and YouTube as Tarleton Wellness. You can contact Tarleton Counseling services at 254-968-9044.