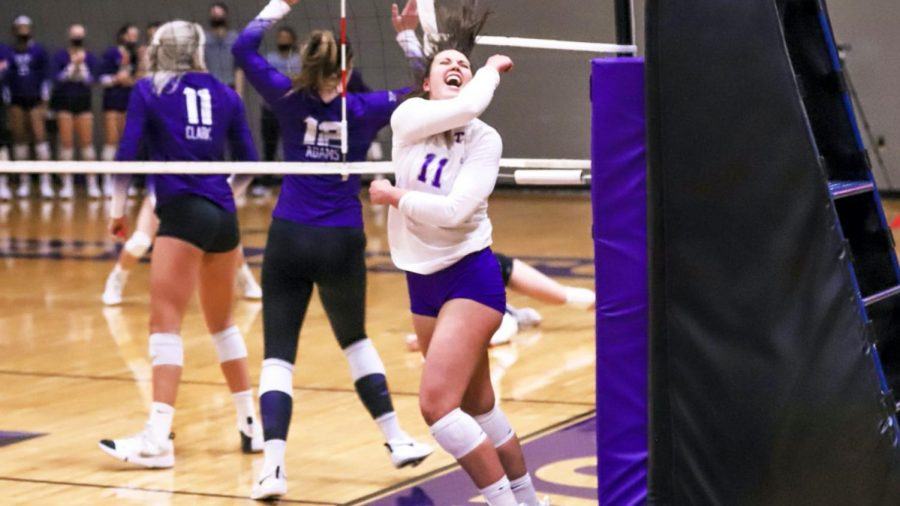 Lauren Kersey, right side, celebrating the Volleyball team’s win at the game on Feb. 25, against Texas Christian University.

The Texan volleyball team played 24 games this season. Out of those 13 games, 12 of them were at home. The Texans started their season right with a 3-0 win against Louisiana Tech. The Texans played three sets, dominating in all of them. Tarleton won all three sets with the score being 25-16. The Texans would go on to play Louisiana Tech once more but they were unfortunately outmatched with a score of 1-3.
The Texans went on the next couple of games with a six-game losing streak but they eventually broke that streak at home against University of Texas at Arlington. The Texans dominated UT Arlington in a 3 set match. Tarleton won all three games with the scores being 25-22 for set one and 25-18 for sets two and three.
Almost two weeks later, the Texans battled it out against the Big 12, Texan Christian University (TCU). This was an exciting game for Tarleton State as they dominated TCU in a four-game match. In set one, TCU beat Tarleton 25-22 but that was not the case for the rest of the matches. Tarleton was able to beat TCU in sets two, three and four. Leaving the end score of 3-1, Tarleton State.
Tarleton went on to play TCU once more almost a month later in TCU’s homeland. This game was more exciting as TCU came ready for Tarleton but couldn’t beat the Texans. This game was a five-match game with a final score of 3 wins and 2 losses for the Texans.

The last two games for Tarleton State were against the University of Texas Rio Grande Valley (UTRGV). The Texans were able to finish out their first-ever Division 1 season at home. The Texans dominated UTRGV in game one with a 3-0 victory. Game one went three sets, in set one, the Texans won 22-17 and in set two the Texans won 25-15. Lastly, in set three, the Texans won 25-13 with the top players being Amber Strange, with 17 kills and 2 blocks, Lauren Kersey, with 6 kills, Amari Franklin, with 5 kills and Lorin McNeil, with 2 kills and 4 blocks.
In the Texans’ last game of the season, game two, they beat UTRGV again 3-1. Game two went four sets as UTRGV was ready for a comeback. Tarleton was able to sweep set one 25-14. However, UTRGV was able to come back for set two with a winning score of 27-25. In set three Tarleton got their momentum back and won 25-16. Tarleton finished the game in set four by winning 25-15. The win over UTRGV resulted in the Texans ending the year with a three game winning streak.
The Texans Volleyball team has not yet released their 2021 season schedule. The upcoming season will be much anticipated after their amazing Division 1 debut during the spring 2021 semester.
You can follow along and get updates by frequently checking the Tarleton Sports Website at: https://tarletonsports.com/ For even more convenience, you can download the Tarleton Sports Mobile App, for updates, schedules, fan rewards and so much more!