Regina Wright sings her way to recognition during her freshman year 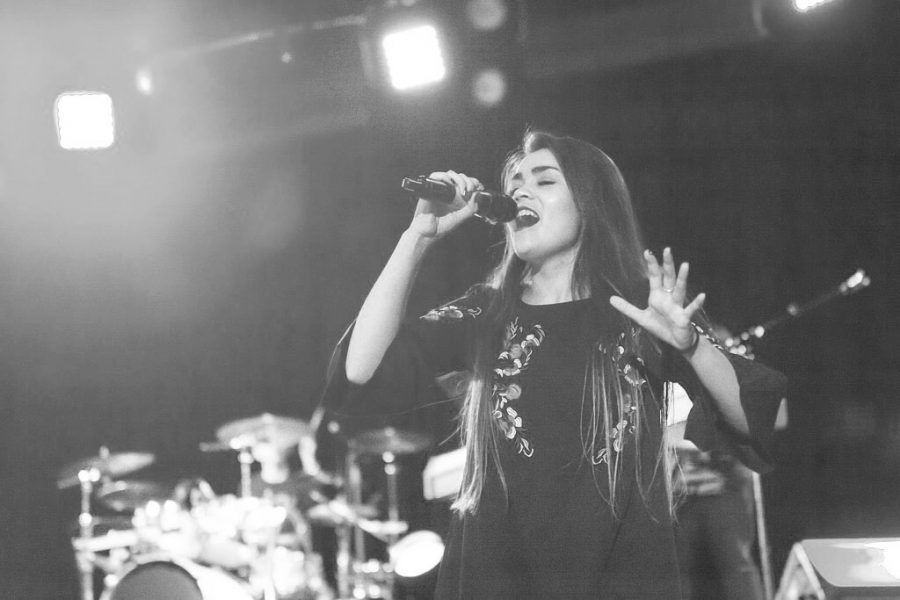 Regina Wright has sung in around 18 choirs total including church choirs.

Regina Wright is a freshman honors student at Tarleton State University. Wright is currently pursuing a Bachelor’s degree in music education with a concentration in vocals. She is one of many rising stars at Tarleton because of her singing.
Regina has been singing her entire life, she did not take it seriously until her middle school years. She has been working tirelessly since then and it has paid off. Currently, Regina is on a music scholarship and is a part of the Tarleton State University Choir.
Between the years that she started singing and when she wound up at Tarleton she has been a part of many choirs, eighteen to be exact. These include the choirs from fourth grade all the way until her senior year at a variety of levels; public school, district, area and even at the state level. She also has experience leading praise and worship music with different Christian bands.
“I have dabbled in about 14 musical theatre productions, and a few productions where I assisted in vocal coaching. I also play the ukulele, guitar and the piano. I’ve also done many solo gigs, competitions and other various random singing events for large groups of people. I was a six-year All-Region choir member in Region III, I was in the show choir [like Glee] for three years and I took voice lessons for four years of high school,” Wright said.
When asked about how she was able to become a part of the Tarleton Choir she was quick to answer.
“My high school choir director is a Tarleton Alum, she was also a Purple Poo, fun fact. I applied for [Tarleton] in September 2019 and got accepted, I came and did my audition for Dr. Troy Robertson in February of 2020, and got a scholarship. I prepared a classical French song that I sang for State Solo and Ensemble the previous year, and that was that,” Wright said.
Wright is able to sing in many languages.
“You kinda just learn it based on whatever piece you are singing, but you have to learn it well. I have done German, French, Spanish, Italian, Latin, Greek, Swahili and Chinese. I probably have even done more but I can’t even count what I’ve done,” Wright said.
Wright is both a music major and member of many singing related activities, this can be very hard to handle but she does her best to balance both sides of her life.
“It is definitely a challenge to balance being involved and being a music major. Most people do not expect you to get so involved on campus if you are a music major because of the time restraint, but I chose Tarleton because of the leadership and other opportunities that would accompany a great music program. Here I have a big voice, and can be recognized for it, if I had gone to a different university that would not be the case. I am involved in all the choirs that Tarleton has, this includes Chamber choir, Texan Harmony, University Singers and the Tarleton Troubadours on top of all the solo repertoire that I need to learn every semester,” Wright said.
Due to COVID-19 restrictions, no one will be able to attend the Tarleton Choirs Spring concert in person. However, it will be live streamed on April 22, 2021, at 7:30 p.m., on the Tarleton Choral Program Facebook page.
“Tarleton Students should definitely watch all the beautiful music that is made amidst a global pandemic,” Wright said.
COVID-19 has proven to be a large problem for the choir community but they are pushing for more community involvement on their online performances.
“When [COVID-19] ruined our senior year, I was the 2019-2020 Choir president. With that job title I was supposed to sing at graduation, direct my fellow senior choir members at Baccalaureate, plan our banquet, senior showcase at the Spring Concert, sing at my last UIL competition and pass the torch to the following president. However, none of that happened. I am so grateful to have the music portion of my life filled again at Tarleton State. Dr. Troy Robertson found ways for us to make music in a socially distant environment, but still produce music that brought me to this place in the first place,” Wright said.
Tarleton will continue to host additional concerts in the upcoming semesters. Keep a lookout for upcoming dates and times to support your fellow Texans!