Tarleton Cheer and the Texan Stars take on Daytona 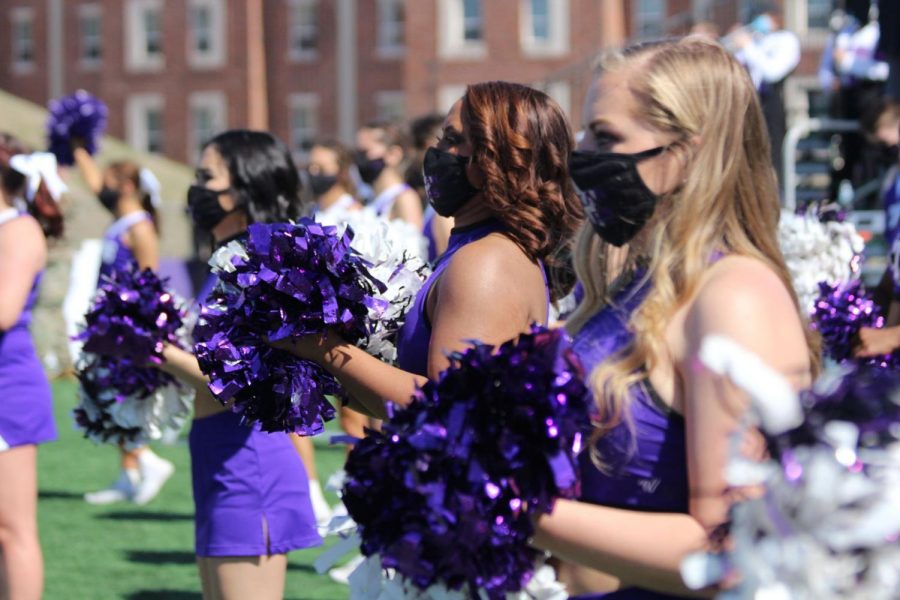 Texan Stars cheering on the Texans at the Tarleton family weekend football game on March 6, 2021. The game ended in a Texan win over Mississippi College.

This year, the Tarleton State University Cheer and Dance teams competed in the 40th edition of the National Cheer leading Association (NCA) College National Competition and National Dance Association (NCA) College National Competition.
The competitions were held in Daytona, Florida from April 7 to April 11. Teams from across the nation were in attendance to compete for the National titles and gold trophy.
This year, due to COVID-19, the competitions looked a little different having virtual options for those who did not wish to travel to decrease the spread of COVID-19. In Tarleton Cheer’s case this was utilized for their Game Day and Spirit Rally Divisions to limit the amount of traveling for Tarleton Students. However, the small co-ed group still made the trip to Daytona. The team flew out on April 7, and returned home April 10, but they did not return empty handed.
The Tarleton Cheer team competed in three categories, including a small co-ed, Game Day and the Spirit Rally Divisions. Under the instruction of Coach Blaine Hamilton and graduate student Madison Scott, the team represented Tarleton State University.
The Small Co-ed Division had 19 cheerleaders and the Texan Rider along with his trusted steed, a stick horse named Shotgun, all partook in the routine. This was the only team that got to travel to Daytona Beach. The team competed in the preliminaries on April 7, receiving fourth place but they did not let that stop them. On the final day of the competition the team gave it their all and placed second coming home with a trophy to commemorate their performance.
The Game Day division group included 30 members in it. This consisted of 19 cheerleaders, the Texan Rider, three Plowboys, three members of People Against Not Knowing University Spirit (P.A.N.K.U.S), three band members and the Feature Twirler. The team had three minutes on the mat and had to include three different parts to the routine. This included a band chant, the university’s fight song and crowd leading. This category is one that the cheer team keeps close to their hearts as they have won this before in 2018. This year, the team placed fifth in this category.
The team also competed in the new NCA Spirit Rally Division which consisted of the same group of 19 cheerleaders and the Texan rider as the Game Day competition. This division is a great way for cheerleaders to compete in more than one category. The time limit for this is two minutes and 15 seconds. This category, being very new to the NCA scene, was also new to the Texan Cheer team but they represented Tarleton well as they placed second for this online routine.
The cheer team and its spirit crew practiced day and night to make these routines to the judges liking, sacrificing their spring breaks and late nights to the team. When asked upon the time commitment and dedication the team had prior to the trip a cheerleader expressed just how hard they worked.
“We have practiced almost every day from 1 p.m. to 3 p.m., we weigh in on Tuesday mornings, along with running. We have put countless hours into this day and night preparing for nationals. We continued to practice during spring break, we practiced a few times Easter weekend and we did not get much of a Christmas break,” cheerleader Breanna Davis said.
Prior to the event the teams both gave a performance for those who could not make the trip to see it live at competition. On Tuesday, March 30 both squad groups and spirit crew members performed the three performances. On that evening, attendees also got to watch the performance by the Texan Stars. This event was open for family and friends at 7 p.m. in Wisdom Gym. The night showed off how excited the teams were to even have the opportunity to compete this year.
The Texan Stars were also in attendance in Daytona Beach, Florida for the National Dance Association (NDA) College National Competition. The team has won this competition before as, in 2018 the team was named the National Champions for Division 2.
This team consisted of 18 girls under the direction of Coach, Elizabeth Walker.
For the Stars, they got two minutes and 15 seconds on the mat to perform three different styles of dance. The three types of dance started with pom, then jazz and hip hop. The team competed in preliminaries as well as finals that week and brought home second place.
Both the cheer and dance teams had an amazing week and are ready to go back next year and hopefully win that National Championship title.
You can follow along with upcoming cheer and dance events as well as view the roster of current Texans at: https://tarletonsports.com/sports/2013/9/25/CHEER_0925131943.aspx