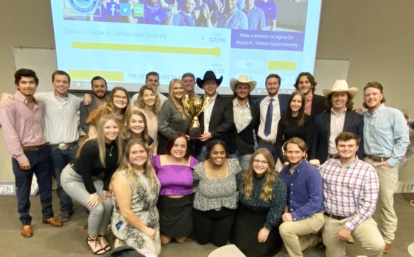 Members of Delta Phi Epsilon after winning the Sigma Chi Derby Days competition by helping collect $25,000 in donations. All donations were made to the Huntsman Cancer Institute.

Sigma Chi had its annual Derby Days April 19 through 23 and this year it was a big hit.
Matthew Flores, Mr. TSU and Sigma Chi Derby days chair member, explained that the philanthropy event was hosted to raise money for the Huntsmen Cancer Institute.
“According to archival information at Sigma Chi International Headquarters, the first ‘Derby Day’ event was held in 1916 at the University of California-Berkeley. Then known as the ‘Channing Way Derby’ because of the California-Berkeley chapter’s location on Channing Way and College Avenue, the event spread to other chapters who created their own Derby Day. However, some people have equated it to the Kentucky Derby,” Flores said.
Each Greek life organization involved stepped up to the plate and brought impressive numbers to the table for this year’s Derby Days.
“Delta Phi Epsilon, led by Brianna Craigie won derby days with a grand total of 6,821 points, 4,125 of those points were awarded for their donation link as every dollar equates to one point. Money donated in the link goes directly to the Huntsman Cancer Institute. Delta Phi Epsilon Cowboy’d up for sure.
Delta Zeta’s, Lauren Gattis, won the pageant [the week’s closing event]. Myself and two other judges judge the talent portion based on: creativity, originality and crowd appeal. Next, they’re asked a series of questions about Sigma Chi at Tarleton and Internationally and then awarded points for every question answered correctly and their confidence. Lastly, we ask them how cancer has affected their lives. Contestants are judged on their ability to communicate and their response’s relevance,” Flores said.
Out of all the women that competed Gattis’ performance stuck out the best to the judges.
“Sigma Alpha, led by Kaydee Denton, won the letter and hat decorating contest [We provided them with pre-cut sheets of plywood which were generously discounted by Pate’s Hardware and lumber]. We have them paint letters and they’re judged based on relevance to the theme, ‘Cowboy up and Kick Cancer’s Butt,’ how they incorporated Huntsman, there and in our chapter, creativity, originality and neatness. We use the letters when we have mixers with their sorority. The hats are representative of the large hats usually worn during the Kentucky derby although we don’t usually use that theme, it’s just another fun thing to do. These women clearly spent a lot of time and effort on their letters, with the ‘Chi’ looking like tooled leather and the ‘Sigma’ having all of the cancer ribbons it was clean and neat,” Flores said.
This week-long event can be taxing for the guys and girls involved.
“Personally, the biggest challenge is not stressing myself out and being too critical. This year was a little different, only six of our active members had actually participated in this event before because [COVID-19] kinda wrecked the world for the last year. Also, our chapter size is a little small so some of the mundane stuff that myself and Co-Chairman, Derrick Mcbee, don’t have time for was hard to delegate,” Flores said.
“However, I am so proud and impressed at how my younger chapter brothers stepped up and became leaders of men like I always knew they could, definitely a proud dad moment,” Flores said.
During the week, sororities that were invited to participate got to pick their own Derby Darling that is then paired with a Derby Dude to compete with in the contests.
“The Derby Dude is a man of Sigma Chi that the Derby Days chairmen selected at random and then [we] make adjustments if needed. They, in addition to the Derby Darling help, lead their team through the week pushing to accumulate points and donate money,” Flores said.
This year’s event was a success for the men of Sigma Chi, raising more money than they expected and the guys expressed that they are very grateful.
“After it was all said and done we raised $25,450 plus another $3,500 in cash and change donations making our grand total: $28,950 raised. Additionally, we have a local partnership with the Erath County Humane Society and we were able to donate 1,500 pounds of dog food [wet and dry,]” Flores said.
At the end of the day, Matthew Flores wanted to thank every one involved and is ready for next year.
“I’m just on top of the world, and so proud of my brothers and all the women who participated. I can’t take all of the credit because it was such a group effort [I’ve always said that it takes a village.] I can’t thank our chapter sweetheart Sidney Velasquez and newly elected President, Derrick Mcbee for playing an instrumental role in the planning and execution of the best philanthropic event we’ve ever hosted. Thanks again to our Alumni, Delta Phi Epsilon, Alpha Gamma Delta, Sigma Alpha, Delta Zeta, Alpha Omicron Pi and Phi Mu,” Flores said.
For information on the next Derby Days for the upcoming year, you can visit Sigma Chi’s twitter page at: https://twitter.com/tsusigmachi?lang=en.