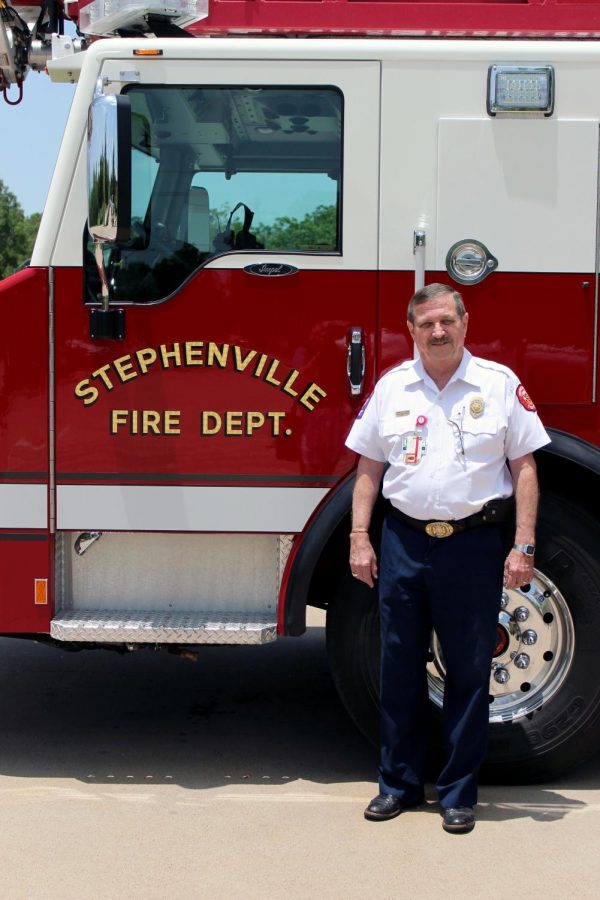 “It’s Just time. To be honest with you I started seriously thinking about retirement at about 45 years [with the department] and when I got to 45 everybody said man you’re close to 50 go ahead and go to 50. I love the job, I love the people I work with, everything, so I started staying till 50,” Chief Chew said.

After retirement Chief Chew plans on playing golf and spending more time with family while still staying involved in the fire service industry.

“I am a member of the regional incident management team which responds with the Texas forest service. Right now, I’ve got a memorandum of understanding from the city with them and I’ll change it to an individual and I intend to keep doing that. The Texas Intrastate Fire Mutual Aid System I’m involved in that and I’ll keep doing that,” Chief Chew said.  “I am on the board of the Texas Fire Chief’s Association and I will keep doing that for a few months. I plan on teaching a little bit and I plan on doing some stuff to keep my foot in the door as far as the fire service side goes.”

Currently, the city of Stephenville is accepting applications for the next fire chief. It is still up in the air if Chief Chew will be on the hiring team as he knows a majority of the other Texas fire chiefs from his involvement across the state. As for his wishes for the next fire chief, Chief Chew wants someone who will continue to help the Stephenville Fire Department grow and improve.

“We got the department where it’s at right now and I want it to keep advancing. I absolutely love this fire department. I’m proud of everything we do but I’m not anything close to being naive enough to [think] that it can’t be done better and I want somebody to just keep improving the department,” Chief Chew said.

Not only has Chief Chew witnessed many improvements made by the Stephenville Fire Department in his 50 years, he has also been involved with the state of Texas’ improvements. These include the department’s second location moving from what is now the Tarleton State University Police Department building to the new building located at 1301 Pecan Hill Road and the installment of new state-wide training requirements.

“I guess the thing that I’m proudest of [is] I was one of the five chief’s that did the report for the West fertilizer explosion and we wrote the report for that for the Texas Fire Marshall’s Office. I feel like that probably changed the fire service in Texas and the way we respond to hazmat stuff,” Chief Chew said.

Chief Chew has left a lasting impression on the Stephenville community by influencing the men who work for him and by loving his job.

Chief Chew is “very understanding, almost to a fault. He will give you chance after chance after chance to do the right thing. He is very non-judgmental you can kind of see where he comes from and he expects you to do the right thing but he kind of lets you be you,” One of the Stephenville Fire Department Battalion Chief’s, Mitchell Hughes said. “We are going to miss him. I personally am going to miss him a lot because he has been a mentor to me.”

With Chief Chew’s retirement coming soon Tarleton State University students should not expect much to change despite the Stephenville Fire Department’s involvement with Tarleton. The Stephenville Fire Department works closely with Tarleton to ensure the safety of its students, faculty and staff year-round. They are most often seen on campus during football games and other events where incident control is needed.

“Any time there is something on campus that happened that they need fire assistance on, we’re there. We work the graduations with our EMS department, we work the football games, anything at the stadium we have our incident management teams up there and our ambulance so we work pretty often with them. I guess you would say we’re the fire department of Tarleton,” Chief Chew said.

“50 years of public service is an incredible accomplishment. His institutional knowledge of Stephenville is something you cannot replace overnight. I feel that Stephenville is losing an icon,” Tarleton Police Chief, Matt Welch said.

Despite the loss to the community Tarleton is not expecting to see much change in their relationship with the Stephenville Fire Department. So, students can expect to still see fire fighters and the Stephenville EMS department around campus when needed.

“I do not foresee a real change. [The] Stephenville Fire Department is comprised of professionals who will carry out their mission of serving their community,” Chief Welch said.

Chief Chew has spent his last 50 years working to give back to the Stephenville community by doing what he loves.