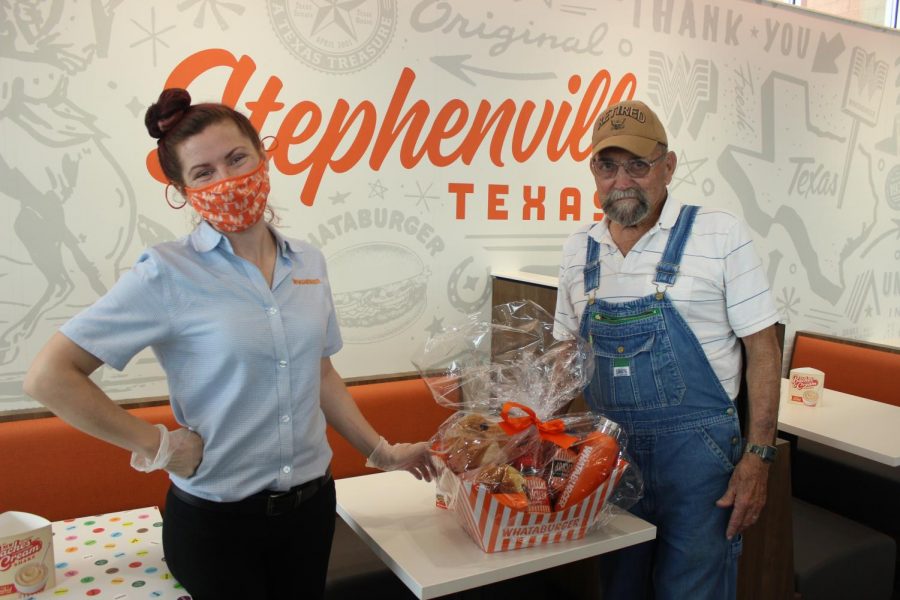 Billy Cowen receiving a gift basket from Whataburger Operating Partner, Minden Sigman, for being the first dine in customer in the new Whataburger store on Washington Street.

The new Stephenville Whataburger opened today, Thursday August 5, at 11 a.m. and will be resuming normal hours going forward. The store is now fully operational with two drive through lanes, curbside pickup and an expansive dining room.

This store is also a prototype design for Whataburger. Whataburger Director of Operations, Mike Burkey explained that the prototype design means that the store is larger with softer textiles and ties to Tarleton State University. The store still has two drive thru lanes but now also has what is called a speed kitchen. The prototype design is an upgrade from the old store with new tables, murals and brand-new equipment.

The first customers for each dine in, drive thru and curbside all received gift baskets with goodies such as a year of free Whataburger and water bottles.

“Oh my goodness it’s great. I’ve never been first on anything. It’s fantastic,” Whataburger’s first dine in customer, Billy Cowen said. “I was gonna have coffee with my buddie, we usually have coffee over there at McDonalds but they were closed, and we’ve been waiting for seven months for this to open.”

To read more about the new store and their plans for involvement in the community you can go to: https://jtacnews.com/12823/news/what-a-store-new-improved-whataburger-comes-to-stephenville/