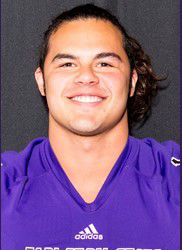 The Tarleton State University Football team is grieving as another player, Alex Sanchez, has died. Sanchez, 21, was a three-year member of the Texan football team and 2013 graduate of Stephenville High School.

According to a Texas DPS Trooper, around 2 a.m. Sunday morning, Sanchez was traveling northbound on US highway 281 when his 2014 Chrysler 300 crossed the center lane and collided with a 1997 Ford pickup truck. The crash also claimed the life if Lyle Thomas Hussong, 26, of Stephenville.

Both drivers were pronounced dead at the scene. At this time services are pending. More information will be provided when it becomes available.

Sanchez’s death is another devastating blow to the Texan football team as this is the second player lost this year, following the death of Brayden Coverdale in March of this year.

For students who may need someone to talk to, The Counseling Center is located in room 212 of the Thompson Student Center on the Stephenville Campus. Counselors may also be reached by phone at 254-968-9044. There is no cost associated with the visit and everything discussed is held in the strictest of confidence.