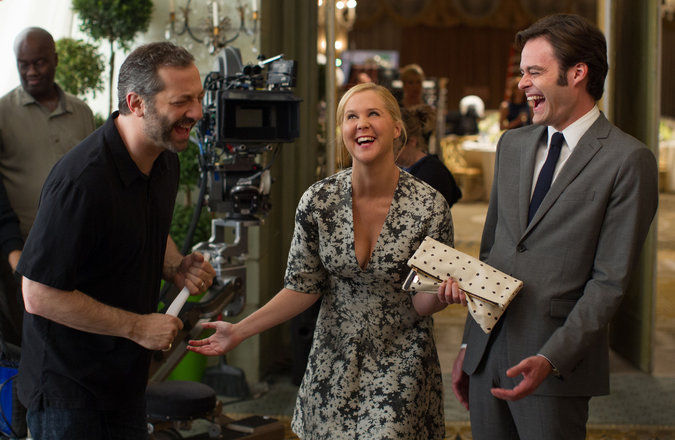 Whether she is delivering awful truths in hilarious deadpan or admitting to something terrible she did last night, there is some sort of hypnotic, mystical shroud to her very existence that renders every criticism and insult thrown her way completely invalid. She is curvy, and not in that perfect, airbrushed way that even plus-sized models are guilty of presenting. She possesses the kind of quick-witted sarcasm that Vince Vaughn could never keep up with. She is real, she is bold, and most importantly, Amy Schumer is honest – about her own flaws, about what life is like for women today, and about the world as a whole.

Perhaps the biggest challenge faced by female comedians in film is that they are constantly toeing the line between self-deprecation and self-assurance. In their quest to cross gender-barriers and take on sleazy, buffoonish roles most often reserved for men, many fall to the former. It is so rare that we see a woman who balances the two, and even more unique for her to be successful and well-received by the public in doing so. Schumer (again, clearly by some sort of magic intervention) spends 90 minutes in “Trainwreck” showing off her mastery of this task, and it is well displayed indeed.

“Trainwreck” tells a simple, familiar story – girl has corporate job and no husband; girl meets boy; girl begins to realize that maybe she doesn’t want to be alone forever. There is a key difference here, however. In the first place, Amy (played, of course, by Schumer herself) is perfectly content with not being married or in a serious relationship at this point in her life. She is living a life she is quite content with, and although it is rarely pretty and often despicable, it is hers, and she owns it. When she does meet the man who begins to change everything, we are not presented with a woman who suddenly exclaims “Aha! This is what I’ve been missing all along. This is what will make me complete.” Instead, the two follow a fairly normal relational course, with Amy taking plenty of time to warm up to him.

In the meantime, far more pressing issues are at hand, and this is where the film finds much of its depth. Amy’s relationship with her cheating, vulgar father (played by the legendary Collin Quinn) reveals real heartache, and the damage that a careless father can have on his fragile daughters. Amy’s sexually promiscuous habits have a way of hurting others, too. Yet, the film addresses these topics lightly, with Schumer’s performance lending just enough edge to the plot.

What I loved most about the story, penned by Schumer herself, was the vagueness of Amy’s own desires. Much of the film is dictated by the words and actions of others, despite her belief that she is the one in control, and there is a raw vulnerability slowly but surely revealed as those words and actions begin to take a real toll on her.

The film is garnished well with light-hearted supporting roles. Bill Hader is adorable as Aaron, the guy who makes Amy doubt her mantra that “monogamy isn’t realistic” and his scenes with LeBron James are worth the price of admission on their own.

In essence, “Trainwreck” is a coming-of-age story for every woman in her late twenties who is still trying to grow up. All independent women eventually reach this crossroads, in which they must discover if their carefree, commitment-phobic lifestyle is holding them back from real happiness. Let Amy Schumer be your guide through this reckless, confusing time. After all, you can trust her.

Plot: Witty and original, this is not a rom-com to skip.

Acting: At this point, it’s fairly common practice to cast former “Saturday Night Live” stars as watered-down versions of themselves in film. Many of the actors in this film live up to that practice, but there is enough solid delivery and physical humor to negate it.

Sights and Sounds: Sounds like a typical chick flick set in the city.

Re-Watch Value: Moderate. The jokes are on point, but the gratuitous sex scenes guarantee you won’t be watching this with your mother.

Theater information and show times can be found at: