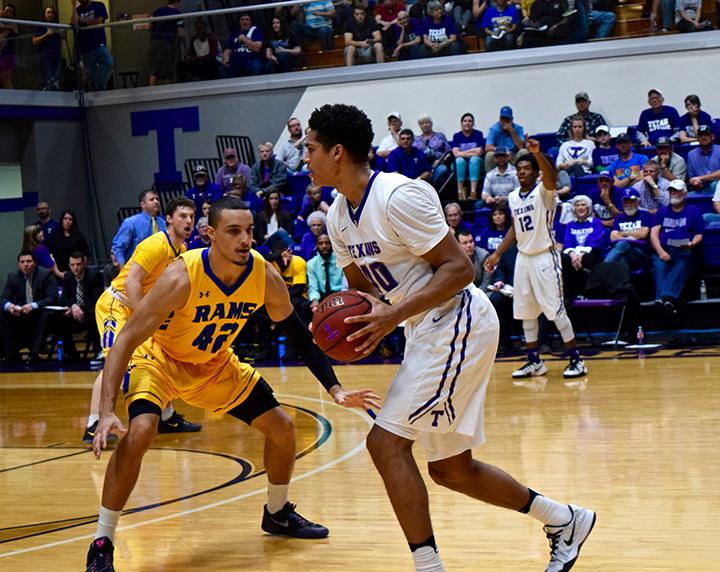 After taking on the Lions,
the Texans will take on the The University of Texas of the Permian Basin. The Texans and the Falcons will tip off on Saturday at 7:30 p.m. in Odessa, Texas.

After two consecutive wins last week against Angelo State University and Texas A&M – Kingsville, the Texans are now first in the Lone Star Conference and climbed to ninth place in the most recent National Association of Basketball Coaches poll.

Also follow the consecutive wins, Texan Basketball head coach Lonn Reisman was named the National Division II coach of the week by Hoopdirt. After being named,

Reisman is now eligible to be named the National Coach of the year by Hoopdirt, after the 2016-17 college season concludes.

Against the Rams, the Texans
came out shooting their best game, Romond Jenkins scored an impressive 20 points, Chantz Chambers 15 and Ridell Camidge 13. For free throws, Anthony Davis shot for 8 of 8 and Nosa Ebomwonyi shot 8 for 10.

Jenkins is also the most recent Texan to compete in the seventh annual Dark Horse Dunker contest. There are 16 competitors chosen from around the country, they compete in a bracket style fan voting competition. Fans can vote online
by visiting DarkHorseDunker.com using their social media platforms. Each fan may vote three times each day, once from Facebook, Twitter and an email account. Voting opened up Tuesday and will close on March 17.

The Commerce Lions are currently 9-6 in conference and 17-7 overall. The Texans and Lions will tip off today at 7 p.m. in Commerce, Texas.