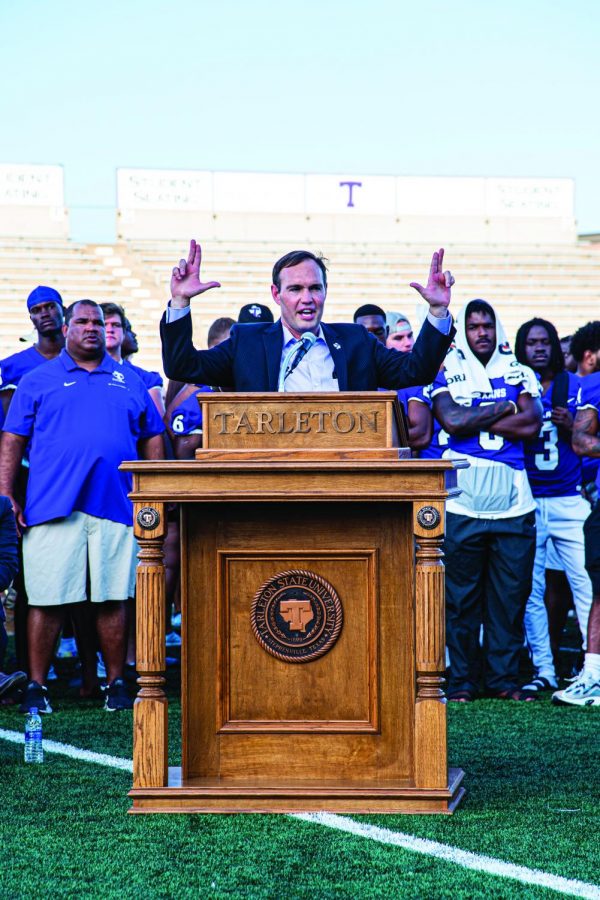 Dr. Hurley shows his Tarleton spirit during his address at grand opening of the Lonn Reisman Athletic Center at Memorial Stadium on Tuesday, August 20.

Hurley lays out plans for Tarleton

EDITORS NOTE:
This is the first story in a series of articles following President Hurley’s first 100 days.

On September 1, 2019 Dr. James L. Hurley officially began his tenure as the 16th President of Tarleton State University. Hurley arrived at Tarleton with his wife, Kindall, his two sons, Drew and Carter, and two daughters, Blayklee and Brooklyn from Greenville, Tennessee, where he served as President of Tusculum University since 2017.
Hurley carries a doctorate in educational leadership and finance from Morehead University and has completed the Institute for Presidential Leadership at Harvard University, as stated in a press release from Tarleton’s Department of Marketing and Communications.
A General Assembly was held for faculty and staff on Sept. 3 2019 at the Fine Arts Auditorium. It was at this assembly that the Chancellor of the Texas A&M University System, John Sharp, helped formally introduce Dr. Hurley to the Tarleton Family. During the assembly, Hurley discussed the Presidential Priorities he will act on as he performs his presidential duties.
Hurley categorized his priorities as short-term and long-term priorities. The presented short-term priorities detail what Hurley will pursue as he begins his role. Hurley’s short-term priorities include listening and learning sessions, campus immersion activities, student interaction, faculty and staff forums, stakeholder engagement and community involvement. The purpose behind these priorities is to allow him an opportunity to learn in-depth details about the university and the community within it. “That means learning from all of you,” said Hurley, “listening to all of you.” These priorities are focused on Hurley interacting with students, faculty, staff, alumni and supporters of the university either through forums and university events.
The presented long-term priorities detail what he will pursue throughout the majority of his tenure. The first is raising the institutional profile, which Hurley believes is very important. “I can tell you as a former president in the great State of Tennessee, there was a reason why we sent our recruiters to Dallas, to Fort Worth, to Houston, because density resided there,” said Hurley. With many institutions outside Texas looking towards Texas for students, Hurley believes Tarleton must enhance its profile to stay ahead of the game. In order to do this, Tarleton must improve in faculty-student research, transparency in said research, focus on regional economic development and raise Tarleton’s Carnegie Classification level to a level 2 institution. Hurley also made note that he will work towards Tarleton receiving an invitation to join the Division 1 NCAA conference, an invitation many had hoped Tarleton would receive since 2017. “I don’t share this vision for the sake of athletics; I share this vision to raise our academic profile,” said Hurley.
The second priority is creating and implementing strategic enrollment initiatives. These initiatives will allow Tarleton to increase their student enrollment rate. One initiative Hurley mentioned was utilizing the many teachers Tarleton has forged to promote Tarleton to their students. With his prior experience in leading his former institutions to increasing their enrollment rate, Hurley believes he can do the same for Tarleton.
The third priority is implementing a new strategic plan. With the current 2020 strategic plan nearing its end, Hurley thinks that, “…we have to think about a vision that takes us into the next century.” Hurley emphasizes that the new strategic plan will be focused on a 10-year perspective with the flexibility to accommodate the changing trends and patterns of that time. “Education is changing, the students that we educate are changing,” said Hurley, “We have to be more diverse, we have to be more inclusive, we have to ensure that all our campuses have a loving, learning community.”
The fourth priority is receiving the SACSCOC re-accreditation. The Southern Association of Colleges and Schools Commission on Colleges is an accreditation board that identifies and recognizes educational institutions as those that grant higher educational degrees. Tarleton is an institution with such accreditation but will face reevaluation to be re-accredited in the Spring of 2021. “I don’t know why I continue to be blessed or cursed but (every institution I’ve led) we’ve faced this reaffirmation process,” said Hurley, “We have a lot of work to do to start preparing for our reaffirmation.” Carrying his prior experience with the reaffirmation process, Hurley says he is ready to aid the university through said process and to receive the accreditation.
The fifth priority is the academic programmatic review. The purpose behind the review is to analyze the current academic programs to see if they can teach students the skills they need for future job fields that have yet to be invented. “The students we are training and mentoring today,” said Hurley, “over half of them will enter a job field in the next 10 years that they have not invented or created yet. We have to be future focused.”
The sixth and final priority is the comprehensive capital campaign. “It’s been a long time…for us to launch a comprehensive capital campaign,” said Hurley. He plans to develop and launch a full-scale campaign to aid in increasing funding towards the university.
The assembly also allowed Hurley to explain why he decided to choose Tarleton. “Tarleton has always and will always be an opportunity university,” said Hurley, “We have provided educational opportunities for individuals like myself that otherwise wouldn’t have had opportunities elsewhere.” Hurley mentioned his history as a first-generation college student to a coal camp family, where very little people ever make it out. Knowing the struggle of living in an environment of poverty and wanting to find an opportunity to change that, Hurley chose Tarleton to help the university grow and help others in a similar situation to have the opportunity to change their life. “Without institutions like Tarleton, think about the rural students across Central Texas, East Texas and North Texas that would not have an opportunity to garter a life-changing education,” said Hurley.

Tarleton State University is headed to the Next Level

On Oct. 1, 2019, Tarleton State University officially received word that the university has received an invitation to join the Division 1 Western Athletic Conference. To discuss the move to Division 1 and the changes that will come from the move, a Next Level Forum was held for students, faculty and staff on the same day at the Clyde H. Wells Fine Arts Auditorium. The forum allowed the Tarleton...